Get ready to level up your fitness.

Has your Pokémon Go gotten up and gone? Are you tired of endlessly hiking the harsh (and occasionally paved) terrain in search of both rare Pokémon and getting swole, but finding neither? Still, if you’re a little geeky and like to combine your workouts with your nerd-outs, Pokémon Go’s the best program for that. Right?

Well . . . yes if you’re into catching adorable virtual monsters, but not so much if you’re looking for a serious workout. For that, there’s the website (and app for both iPhone and Android) Fitocracy, a geeky RPG-inspired fitness site that incorporates gaming elements into your exercise routine. With each workout you complete, you enter it into the ‘track’ section on Fitocracy’s site, after which a cheery little robot both calculates the points you’ve earned per exercise and compliments you on your routine. Enough points, and you get to level up. Huzzah! Other fun RPG-esque elements include the ability to go on quests, to accept challenges, to win achievements, and to duel your friends.

In the realm of quests, Fitocracy has quite a few, ranging from easier (‘O Hai Abs: Do a set of 20 crunches’) to medium (‘Wax On, Wax Off: Embark on a quest for a sound body and mind. Practice a martial art and do some bodyweight work. Finish your session with a relaxing stretch to reach your soul's equilibrium. Try this out in a single day's workout: perform a set of 10 Jump Squats, practice a martial art for at least 30 minutes, find your inner Zen and stretch for a 10 minute session after your workout, and perform a set of 20 regular or kneeling push ups’) to hard (‘The REAL Century Push: Perform 100 push ups in one set’) to ridiculously difficult (‘Triathlon - Ironman: Swim --&gt; Cycle --&gt; Run! Complete in a day's workout. Cycle 112 mi in one session. Run 26.2 mi in one session. Swim 2.4 mi in one session). Whatever your level of skill, there’s a quest for you ---- and more to work up to. 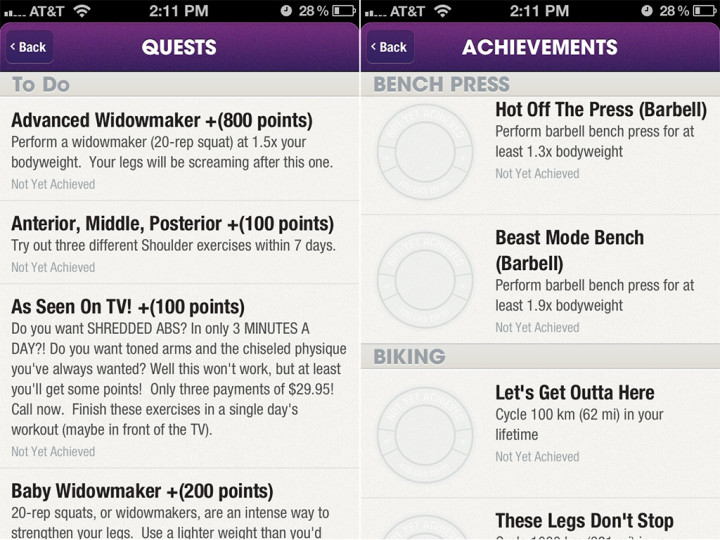 Quests that don't involve camping level one rats or chickens? +1 for Fitocracy.

Achievements are won for a variety of different things, including specific exercises/exercise sets, and social happenings such as posting comments and receiving or giving ‘props’ (which function more or less the same as FaceBook ‘likes’ on Fitocracy). Duelling your friends and issuing challenges are both restricted to those who pay the site, which I’ll cover later, but accepting challenges is open to all. Sitewide ones are posted occasionally by the site admins, you can join a social group that issues challenges, and, if your friend’s a paying member and you’re not, you can still accept their challenges . . . much like in many RPGs.

Speaking of the social aspect, Fitocracy’s definitely got one. You can customize your profile with a pic and a little blurb, and from there you can add pictures, update your status, and friend other Fitocrats. When you complete a workout, it’s posted on your wall, where your friends can congratulate you and give you props. Interaction is much encouraged in Fitocracy ---- though, if you so desire, you can also remain an interaction-less hermit. (Hey, hermits like getting buff too). For the truly outgoing (or motivated), groups also exist, where you can focus on a certain workout or simply hang out with a bunch of folks like yourself. For example, if you’re a senior and getting into fitness, there’s a group for you. Just interested in bodyweight exercises? A group for that. Do you just really want to focus on your pushup game? Well, there’s a group for that too.

Unsurprisingly, there are also multiple groups for geeks, including a Game of Thrones group, a Firefly group, and one for BBC's Sherlock. Fitness-loving geeks unite!

Still, while all the above aspects are great fun, Fitocracy’s best quality (in the opinion of this humble writer) doesn’t have anything to do with its RPG associations at all. That would be its customizable workout creator and tracker, which is an incredible help to those who might’ve only just started out in the world of fitness. Individual exercises are easily searchable in Fitocracy’s workout section, complete with descriptions of each one and how to do them. In most cases, especially with the more popular exercises, each also comes with a short video of a trainer showing you just how to perform the exercise in question. Ever wanted to work out, but were concerned that you’d use the wrong form and mess up your spine for the next week? With Fitocracy’s video demos, you can stop worrying. It’s equally simple to string a few exercises together ---- and, if you really like the resulting workout, you can save it to do again later. Additionally, each workout is automatically saved to a calendar, where you can track your progress and get motivated to keep up your streaks. Each new personal best is also saved, and you’ll get extra kudos for besting yourself. 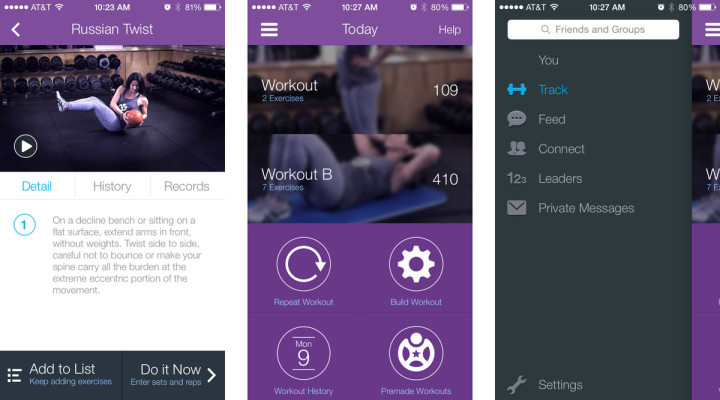 Fitocracy's demo videos and workout creators are ridiculously handy for both newbies and the more experienced.

You’ll notice I’ve mentioned the ‘paying member’ issue a few times, so let me lay out just what you’ll get for a subscription to the site (which, by the by, costs $4.99 USD per month or $44.99 USD per year). First up, you’ll get a report of all your activities each week in your inbox, hopefully helping to keep you motivated. Second, private messaging. Third, duels. Want to challenge a friend to a points contest, to a distance challenge, or to a reps competition? You gotta be a paying member for that. Fourth, you can claim a title, which will attach to your username. Fifth, you can save other peoples’ workouts instead of just your own ---- so, if you see somebody else put up a sweet routine, you can save it to do yourself later instead of having to recreate it by hand. Sixth, you get a sweet badge attached to your profile that says ‘Hero’ (which is what paying members are called). Seventh, by supporting the site, you’ll be helping to develop new features, which you’ll then be getting early access to. And, finally, eighth, you’ll get the ability to save infinite workout routines, rather than the eight routine slots you have as a free member. While it’s not included in membership, you can also pay to get your own personal trainer, who’ll work with you one-on-one to encourage your fitness efforts. 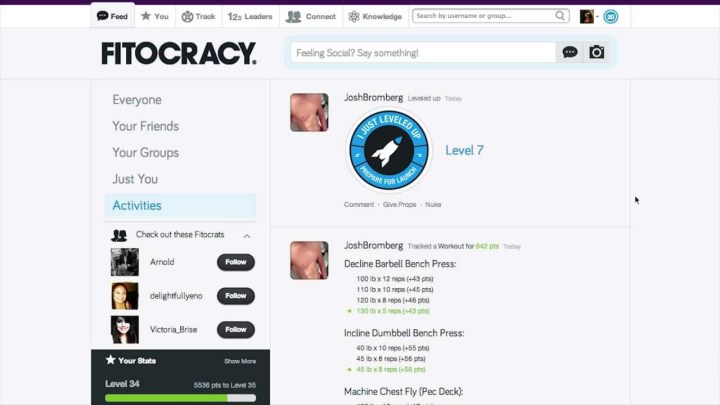 If you want to automatically save this guy's workout, you've got to be a paying member. Recreating it by yourself, however, is absolutely free.

Now that we’ve talked over Fitocracy’s exciting points and the perks of being a paying member, it does have a few downsides. For one, if you don’t feel like disclosing your gender ---- or if you don’t identify as strictly ‘male’ or ‘female’ ---- there currently is no way to join. Seems like there should be a way around that, but, at least as of right now, there isn’t. The other primary complaint, though it’s not a large one, is that some aspects of the site (primarily the joining of groups) could stand to be a little more streamlined. Though it’s a fairly young site and a few mildly clunky bits are quite understandable, they can still be annoying upon occasion.

Despite the above problems (and lack of adorable monster catching), Fitocracy remains a great option for any geekily-inclined folks looking to combine gaming with fitness. Heck, it’s a great option for anyone who’s looking for the combo of fun and working out period, whatever their level of RPG lovin’ is. It’s a fresh new way to look at your fitness regime, an excellent spot to learn a few more exercises, and overall a really positive space that encourages users as they go. Where some workout-related sites get a little negative and use the fine mom-inspired strategy of guilting to ‘push’ you, Fitocracy keeps things light and fun. Log in, level up, get buff, and prepare to have a tiny robot tell you how awesome you are.

With that level of exercise entertainment, even the most devout Pokémon-Go-for-fitness aficionados might find themselves choosing Fitocracy.