by Mel E. Furnish 9 months ago in Series · updated 3 months ago
Report Story 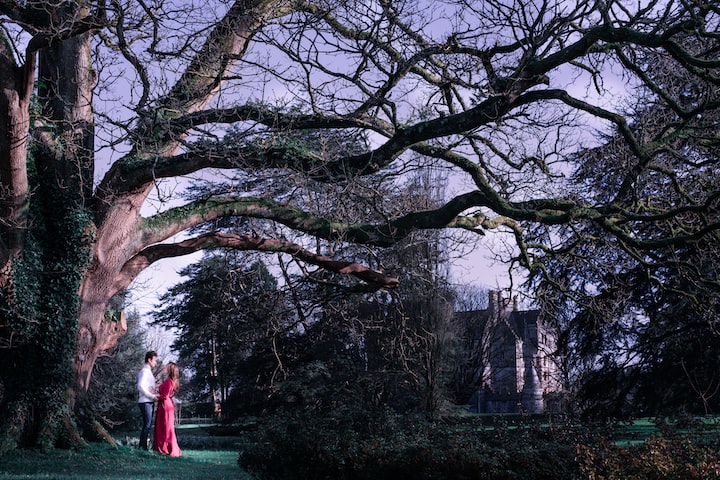 Photo by 2sometravel on Unsplash

“Remember, you can’t reach what’s in front of you until you let go of what’s behind you.”

Darkness lurked among the twisted forest path that prevailed before a young, beautiful woman. Her soft, glowing skin pale under the full moonlight. Sharp violet eyes cut through the frosty night air, banishing away shadows that crept by. Long, curly blonde-crimson waves of hair streamed over her shoulders and down to her hips. She wore a lengthy dress with living roses blooming along every ruffle and edge of the fabric. Her fingernails were bright red and along her painted face were strange but lovely and elegant scarlet designs.

In the past, freed memories from her eyes would transform into little sparkling droplets of salty liquid down her cheeks; they were the tears of failure, the pain of rejection, and the reflection of regret and sorrow. The Curse of Lost Love prowled in fading shadows of her mind as she rose from the taunting ground that threatened to swallow her with past mistakes.

“Adara,” a man’s low voice called. The Goddess of Affection slowly turned, her blank expression soon fading into a countenance of pure joy with her ruby-red lips curled in a playful smirk. Her eyes drifted from the ground up to take in the figure of a tall, handsome man.

“Blaze,” she breathed; her gentle whisper like silk against his ears. He had spiky reddish-blond hair and broad shoulders. The uniform top he wore was red, and the pants black. His fiery amber gaze shot straight through her divine soul. The God of Fire casually strolled closer. With every step he took, she intently watched as she could feel her heart pounding rapidly. Her breath quickened when he stood but an inch from her; as though he had drawn the air from her lungs and ran away with it.

Blaze’s majestic, flaming eyes locked on hers as he seductively smoldered at her. He gave her a wink as he took her soft and shaky hands in his. He leaned in and kissed her forehead. She released a low sigh of relief. He pulled her in against him with his strong arms to whisper in her ear. “I’m glad thee hath come.”

She subconsciously pulled away while resting a hand on his beating heart. His chest was muscular; the thoughts of it bare against hers made her heart pitter-patter. His heartbeat slammed against her hand. “The Divine Ranks will disapprove.”

He chuckled; the feeling of his body trembling so close to hers was making her mind spin. “We are The Divine Ranks.”

She frowned while shrugging her shoulders. “We are only The Second Generation… The Common Deities!” She rolled her eyes. “Well, you anyways. My brother and I are considered among The Third Generation… even lower...” she trailed off.

Blaze held her chin up with a finger so she would stare into his eyes again. “Let us not worry about what others merely gossip. Nothing so foolish should keep two apart.”

Her heart plummeted at the thought of the others learning of their secret meetings. She hesitated but soon stepped back from Blaze’s touch. Her eyes remained low to the ground while she tried to hide the hurt. “If Demise found out…”

Blaze’s comforting smile vanished at the name she muttered. He darted for her and took her up in his arms as she flailed her arms and legs in surprise. He smirked as he looked deeply into the sapphire pools of her irises. “Anxiety is in thy head again.”

She frowned. “He is my twin brother… He often knows my secrets before I do.”

Blaze huffed. “He darest not speaketh of us?”

Adara shrugged. “If he hath, mother would mention it…”

“Let’s whisper to Lilithia that it stays so.”

Originally published on Wattpad, Adara's Curse is an old short story I started writing several years ago. I removed the story a few years back and have since decided to redo it and publish the short story here!