by Mel E. Furnish 9 months ago in Excerpt · updated 5 months ago
Report Story

The Chronicles of Enchantments - Audio 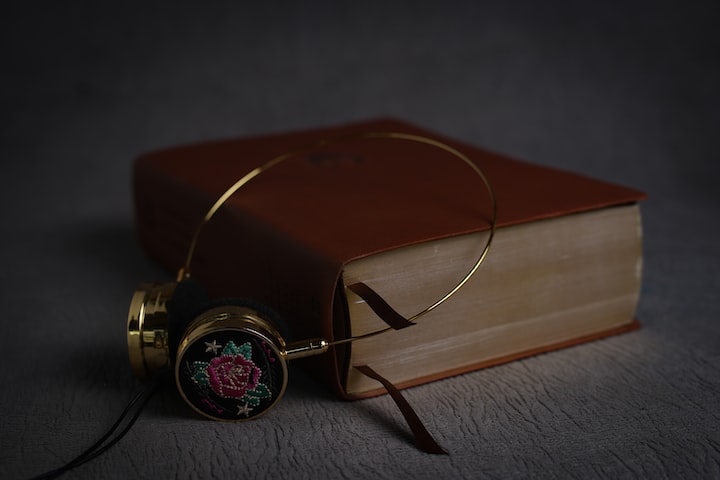 After many hours of vigorous narrating and editing, I have finally completed my first audiobook!

As of now, the only book of my series, The Chronicles of Enchantments, that is available for purchase on Audible, is my short story, Healing Scars of the Past.

The remaining survivors from the Fall of Sotan scattered about, some forming packs among themselves. Many of the people possessed wolf syms, one of them was named Zyro, and he was the son of Zotin, Head of The Sotan Family Royal Guard. Begrudgingly, Zyro hunts with two young females who were born after the gruesome siege on Sotan. Their ignorance of the horrors he witnessed and executed himself when he was nine years old drives him insane. The bloody slaughter still rages on within his mind.

Despite the tragic failure he is haunted by, he is caught off guard with promising news. Will he find and return the lost princess he swore on his life to protect? Will he redeem himself or will he discover his pursuit of redemption only leads him to more suffering?

Zyro’s amber eyes flashed open as a newfound strength exploded within. Adrenaline surged through him as he swiftly spun out of the Sithmora’s grip and shifted into a dark-pelted wolf again. She gasped as he lurched for her throat. The scream she unleashed cut short as he ripped into her flesh.

Abruptly he felt something knock him over. As he crashed to the soggy ground, he felt a heaviness overcome him. His fur had soaked up some of the blood-splattered underneath him. The scarlet substance began to drip from his coat. He winched in pain and unleashed a low growl when bolts of agony rippled through his leg muscles.

Zyro snapped his attention to the source of the blow. He promptly scanned his surroundings to find a Sithmora with a whip in her hand. The young wolf rapidly peeked at his leg to see scarlet liquid trickling down from the fresh wound. He bared his sharp teeth as he prowled closer to his new attacker.

They circled one another, waiting for the other to strike. In the blink of an eye, Zyro lurched forward and sank his claws and fangs into her skin. As she struggled in his grip, he started to shake with her locked in his piercing clutches.

He violently thrashed his head one last time and sent her small figure flying—when her body collided with a stone wall, the dreadful sound of bones shattering echoed in his ears.

Zyro’s heartbeat fiercely pounded as his blood roared against his eardrums. As soon as he checked to make sure the Sithmora was lifeless, he darted off into the muggy night. He bolted through the ruins and bloody fights, determined to find Evaleana. Within a few moments, he found himself back to where he had lost sight of her earlier.

He lowered his head to sniff along the ground, trying to find any sign of her. However, the stench of rotting flesh and blood was too thick to trace the missing princess. He snorted in frustration as he continued to investigate the area. After several minutes of frantic searching, he decided to stop and think.

The Fall of Sotan seemed to last only a heartbeat, and the plan executed behind the siege was merciless. Blood bathed the ground, and fire destroyed everything. Even magic was useless in the end. Even at the beginning of the battle, after Queen Ritalia had been murdered, the only hope left rested in the survival of her daughters, Princess Evaleana and Sivila.

Young Zyro was darting through the castle halls, calling for his friend.

“EVA! EVALEANA! Where are you!?” he screamed.

Soon he reached her bedroom. His heart raced as he reached the doorway. Queen Ritalia stood in the door, her face pale. Without thinking, he bolted inside past the queen and bowed to Eva.

Zyro didn’t think about how his battle looks might frighten Evaleana. Her sharp cobalt eyes glistened with fear as she shook. Zyro gave her a reassuring smile. He frowned as he looked down at himself. His short sword dripped with fresh, sticky crimson liquid; his black leather boots drenched in mud and blood.

Ritalia interrupted their reunion as thunderous eruptions howled through the castle without warning.

“Zyro,” she called. The young boy hastily turned to face her with a severe look. Ritalia smiled as she knelt to whisper in his ear. “I need your bravery. Now, more than ever. You must get her out of here. Take her as far as you can go. I know I ask a lot of you—”

“I will do anything you ask, My Queen,” he cut her off without hesitation. “You need me to protect her…” He grimaced as he dropped his head and his voice. “You’re not coming… are you?” He struggled to look from the floor to lock onto her eyes to see her fighting back the tears. His heart ached as he realized she intended to stay behind.

“You’re a very clever young boy; I need you to be strong for her. Please,” she begged. “Promise me.”

Zyro dipped his head. “I will always protect her with my life.”

Ritalia kissed his forehead. “Take the dumbwaiter, get outside the castle through the gardens, and get as far away from here as you can,” she promptly directed. Zyro speedily directed Eva to the small hidden lift in the corner of the large bedroom. He glanced back as Eva started to question what the plan was.

“Wait, what?” she demanded. Evaleana backed away from Zyro as she scowled at her mother. “What’s going to happen? Are you coming with us?”

Ritalia bit her lip. “Zyro is going to lead you out of here; he will protect you…” she paused. “I will be right behind you.”

Queen Ritalia struggled to smile. “I will always be with you.”

Silence engulfed them. “Go,” Ritalia beseeched. Evaleana’s eyes zipped between her and Zyro. Ritalia snapped Zyro a look and penetrated his mind. “Get her out of here… now!”

Zyro shook his head as he swiftly grabbed Eva’s hand and dragged her to the dumbwaiter. Eva hesitated to crawl into the small box. She started to panic again as she tried to prolong the inevitable.

Immediately loud and heavy footsteps echoed from down the hall. Zyro’s breath was ripped from his lungs as he felt chills prickle up his spine. His blood ran cold as he caught a flicker of sheer terror in Queen Ritalia’s blue eyes.

“I-I don’t know, honey,” Ritalia stammered. She suddenly pushed Zyro to enter the lift too. Zyro felt his heart sink as he heard her struggling to suppress her sobs.

“Mother?” Eva called. Ritalia peeped at her daughter. Seconds felt like years as the world froze around the group.

The young queen promptly stood tall as she whirled around to hold her ground. Zyro had to hold Evaleana back as she tried to reach and plea for her mother. Zyro’s heart slammed against his chest as he frantically pulled on the ropes. His breathing quickened as he struggled to get the lift down.

The footfalls grew closer and louder.

Ritalia gave in and looked over her shoulder to see Eva’s face doused in tears as she trenched her hand out for her. Zyro’s jaw dropped as Ritalia lifted her hand towards her.

Tears gushed down the queen’s face as a brilliant light swirled around her hand as her power gathered. Seconds before her magic could break the lift free to tumble down, a man stepped into the doorway.

“I love you,” Queen Ritalia exhaled as she flicked her wrist. Zyro’s eyes widened as a field of glistening blue energy glowed around the dumbwaiter. Before Ritalia was out of sight, the end of a blade plummeted out of her stomach. Zyro cringed as he held Evaleana in his arms as blood sprayed across the floor in front of them.

“NO!” Eva wailed as Ritalia’s magic plunged the lift down.

Zyro’s memory became blurry as he helped Eva escape the castle. Her blonde hair was a mess, and her blue eyes wide with fear. Despite the urgency to get out and away from the royal chamber, he felt guilty for not trying to save her. His heart sank for her, but he knew that Ritalia wanted him to focus on getting her daughter to safety.

The rest of his memories from that night were a haze. Monsters flooded the castle. Howls of vicious beasts and battle cries of Domordain Soldiers and Sithmora roared in his ears. Blood spattered the walls and soaked the floors. Dead bodies littered the once tremendous and serene halls. The scene always took his breath away when it replayed before him.

Zyro stared blankly at his paws. He tried to shake what happened next. Unfortunately, nothing could stop the memory from bursting his heart again and again.

A man’s screech erupted within his mind. A tear streamed down his face as he recalled watching his father die.

He was a young boy again, darting through the battlefield that was once his home. He transformed into a dark wolf and attacked the beast that had taken his father’s life. Flesh ripped, and blood gushed out of the wounds he inflicted. The hot, thick fluid poured out of the monster's body and flooded his mouth, leaving a sharp, salty, iron tang on his tongue.

To read/listen to what happens next in the series, pick up the book, The Deity Jewels: Part One, The Prophecy.

Brace yourself for a thrilling roller coaster of a story with twists and turns to lash you back and forth. Dive into the pages of the first piece to the legend of Enchantress Evaleana, the beginning of a captivating saga. The start of Eva's life isn't a fairytale, and for many others in her life, there are few happy endings and few happy beginnings. Her childhood was a lie, and her destiny ties to her real past. Her capture led to an unexpected journey filled with secrets and magic as she discovers who she is and who she is meant to be.

While it was definitely frustrating, it was worth it in the end, just to be able to know I could it. I've had requests to get my books on audio, so here it goes!

I hope you enjoy it!

Soon I will release a mini-movie with the audio from the book. I can't wait to share it with you! :)

I borrowed my fiance's mic to record and for the editing I used Movavi Video Suite 20.1. After several hours and lots of water, I hastily submitted my narrations to ACX to publish the audiobook of Healing Scars of the Past to Audible.