by Mel E. Furnish 12 months ago in fantasy · updated 5 months ago
Report Story 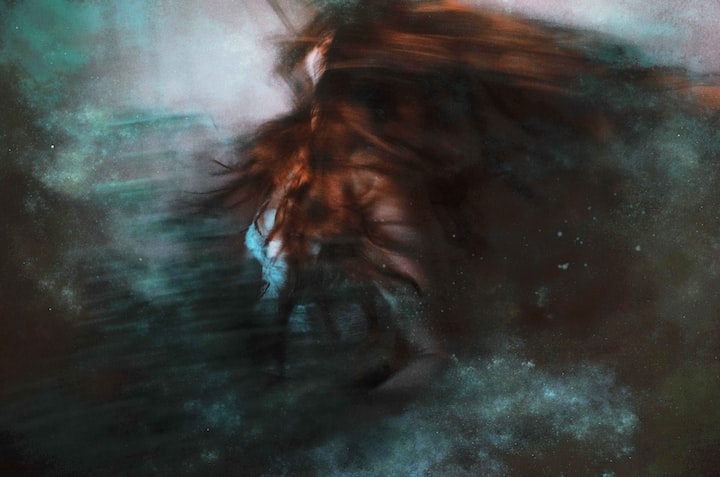 Photo by Camila Cordeiro on Unsplash

"Your Grace, we must leave!" urged a man's voice laced with panic. "Calypsia, we must go, now!" he pressed. A gasp escaped his lips as he witnessed her fading fast. "Calypsia!"

Darkness engulfed the girl's mind as she became unconscious; her body turned limp, and she gradually sank to the depths below. The push and pull of the water yanked her further and further away from her male companion. His heart pounded against his chest as he pursued her sinking body as swiftly as he could. His tailfin lashed as he stretched his arms as far as he could.

The girl's shiny scales up to her hips glistened with brilliant blue and purple hues. Her long auburn hair floated around her in an eerie manner as she continued to sink deeper and deeper. "Calypsia!" He screamed as he pushed himself harder and harder against the water's intense pressure. As the darkness of the depths began to grow, his heart sank further with her. "No, no, no," he cried out as fear surged through his veins. "This can't be happening," he grumbled as he strained his body to the limit to reach her. Before his fingers were just within reach of her hand, something flashed by.

"No, please, no." The blood roared in his ears as his muscles burned from his effort.

Another dark figure darted by. The water around the merman began to buzz from a strange force. He scanned their surroundings as he grasped her wrist tightly. A shrill scream echoed all around them as he started to carry her toward the water's surface. As he lifted her higher and higher, he grew weaker and weaker. His body ached as the light from above shimmered over them.

Just as she started to awake, he heard a strange voice from beneath them. He tried to ignore the sounds of sirens below. A mutated one lurked at his tail, occasionally nipping at his flesh and laughing whenever he yelled. The girl's blue eyes widened with fear as she saw the evil abyss-keepers, the cave-dwelling possessed sirens gaining on them. Their sharp fangs bared as six of them surrounded the pair.

“We’re going home, don’t worry,” he reassured her as he tried to fight his increasing fatigue. His red hair slowly became more visible, and his green eyes started to glisten from the increased light above their heads. The beautiful rays of sun surged newfound strength through her veins as hope for their survival triggered her vigorous mindset. Calypsia swiftly flipped out of his arms and turned to face the crude beings with a furious glare. She lifted her palms and closed her eyes. “Calypsia, don’t-!”

Abruptly her gaze opened, and a brilliant azure light exploded from them, temporarily blinding their enemies. As they cried out, she started to wave her hands around her body as she began to spin, her tailfin swishing water to and fro to keep herself above their heads. Before the first one to recover reached her, green seaweed swiftly wrapped around its neck as she twisted her hand toward the beast. She flicked her wrist toward the surface, dragging the creature into the air by the plant and garrotting it above the water’s surface. Powerful currents surrounded them as she manipulated the water to protect them.

Without warning, a massive shadowy figure bolted from beneath, aiming directly for her. The beast picked up enough momentum to break through her water currents. The man’s emerald eyes darted between her and the creature. Before she could attempt another defense with her element, the man lunged his body between her and the beast. As soon as he darted in front of her, he and the monster locked their attention to the other.

The merman glared as he looked defiantly into the sharp red eyes of the possessed aqua drac that pursued them from the depths. Its long dark purple body slithered through the water like a snake as it bared its four sharp fangs into the merman’s face. Just as it lurched its head back to gather its venom for a kill, Calypsia unleashed a powerful current into its throat.

The creature recoiled as it tried to recover. Unleashing a pain-filled shriek, it shook its head violently as its nostrils flared. It spun back around to face them again; this time, its red eyes burned with menacing fury. Calypsia rapidly gripped her partner’s hand and summoned a spout to rip them out of the water’s depths and back to the surface. While her blue eyes continued to glow and look skyward, his troubled green gaze remained below, anxiously waiting for a sign of their attacker. As their skin and scales breached the air, their hearts raced.

Calypsia’s stream carried their bodies to the nearby sharp rocks. After resting on the hot surface, her eyes abruptly darkened as she started to pass out quickly. As they panted from fatigue, sweat poured in rivulets down their backs. Her muscles throbbed from exhaustion as she struggled to face him. Barely before her figure went limp again, she managed to whisper to him, “Kefortis,” she breathed with a weak smile. “We’re almost home.”

Kefortis smiled as he inched closer to her and gently scratched her head as she grew unconscious. “I won’t let them take you away, ever.”

Suddenly an eerie presence crept into his mind, and he shook as he felt something watching him. He surveyed their surroundings; green eyes narrowed, brows furrowed as he scowled. “Show yourself!” He spat.

A burst of strange laughter erupted inside Kefortis’s head. He swiftly cupped his skull in his hands as agony shredded through his brain. “You are no match for what is coming. Not even the almighty gods will stand a chance,” the creepy sharp voice taunted. “Calypsia is all he wants; give her to us, and we’ll stop snatching your kind.”

Kefortis shook his head as he leaned forward closer to the water, mentally pushing away the demonic manifestation that tried to linger in his mind as hard as he could. “Evil has been stealing the children of our people for eons. We are not taking it anymore; why do you think we’d be so bold to be out there? If you want her, lurk around and find out what we’re capable of.”

The beast chuckled as it slipped apart from his head, “We’ll meet again. Very soon, Kefortis,” it snarled.

Water plunged into the rocks surrounding them, emitting a spray of cool mist over their heads. Kefortis frowned, seconds passing like years as he turned to glance at her calm, beautiful body. His heart hammered within his chest while the monster’s words continued to echo in his thoughts. “You are no match for what is coming. Not even the almighty gods will stand a chance… Calypsia is all he wants.”

A low grumble from Calypsia snapped Kefortis’s attention back to reality. “What’s wrong?” she asked softly, her eyes still closed from weariness.

Kefortis hesitated as his stress promptly returned. “We need to warn the others. Demise is on the verge of something….”

Scroll down to find more of my work. Have a good rest of your day/night! :)

The Chronicles of Enchantments

(First Saga) - The Legend of Evaleana

~ The Prophecy of Elements (coming soon)

~ Healing Scars of the Past

~ The Sacrifice of a Guardian Angel

More stories from Mel E. Furnish and writers in Futurism and other communities.