The WSJ is NOT Journalism - Here's why.

Truth matters. We all need the access, resources, the education, and the skills to be able to get to the truth for ourselves, and not merely believe what we are told is true or told to believe. 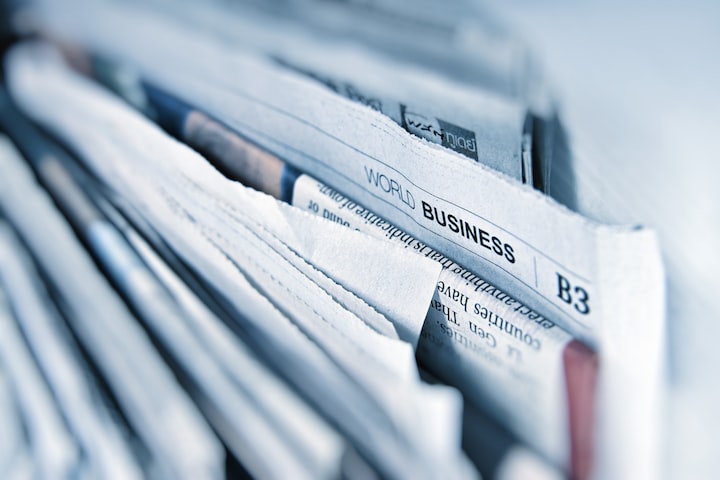 Photo by AbsolutVision on Unsplash

This article is in reply to [some of] the WSJ documentary on the future of global trade and the global supply chain. To reply to the entire thing will take more than one article because I couldn't get two minutes into it without already identifying a slew of propaganda, and claims that were either incorrect, dangerous, or terrifying.

"Of course everyone got it wrong about demand. 80% of all cash that has ever existed in the US was injected into the US economy, in the matter of a year, at the same time as government mandating closures of all "non-essential" businesses, while also suspending payments on loans and forcing landlords to not be allowed to evict tenants who don't pay. If there is a recession, usually, there's not 20 trillion dollars artificially injected into the economy contributing toward making it even worse as inflation happens. The recession came, just later than expected, and it will be much worse than expected. So many government bail outs, unaffordable everything, including homes, fuel, energy, health care, and products of every sort, because of a lack of production and supply. Any saying economists got it wrong about inflation? Obviously, because either they believed everything the government was telling them, knowing inflation would make those in government look bad and not get a "win" for their party, as well as so many speaking out against these policies and warning of impending inflation being censored and prevented from being heard. Everyone with a brain saw this coming, the problem is many on that side of the aisle either don't use their brain, or they believed everything that they were told that the government would actually fix something, despite all evidence to the contrary.

When government gets involved in things they don't belong in, things inevitably becomes worse. This is become government is inherently slow, inefficient, and they try to appear as though they are "fixing" it, but with a bunch of one-size-fits-all polices and "solutions" that lead to so much unnecessary waste, and all at the tax payer's expense.

No matter what it is, government getting involved rarely ever helps, as it often causes much worse problems in the future. Government doesn't "solve" problems, they merely manage the problems we already have, and claim to be in control of them, therefore, they are still worth giving money to. And it's sad that people believe it's the duty of the government to step in and fix things. Government has very few responsibilities, to ensure national security, to maintain law and order, and to negotiate international trade deals. And maybe some degree of interstate travel/data collection. That is it, on a federal level, the less you notice their direct influence in your lives, the better.

As the governments get smaller, they are more easily and more appropriately, as well as more efficiently, able to address more local problems, but they are still subject to the same problem, they take money from everyone, however, no policies make EVERYONE happy. Everyone knows you can't make everyone happy, and therefore, government will always fail at it's job IF it's sole purpose is to make everyone happy. That's not why government exists. Government exists to ensure law and order, to ensure projects get funding and get completed that few individuals would want to fund on their own, and to maintain a mutually agreed upon set of laws to ensure some degree of order. That's it. Government, as with any democracy, is subject to many inherent faults, it is subject to the tyranny of the majority, it is made up of humans, which are inherently imperfect, it gains power and authority, and has to responsibly administer that authority upon others, and special interests will always exist.

If there is something to be gained, there are people who exist who will try and take it. The easier it is to take (aka the less the resistance,) the more quickly it will be taken. Governments have gotten in the business of things they don't belong in, and people wonder why those things are failing. Obviously, because what people want, or what they believe will make them "happy" often fails to include other necessary and pertinent context, and humans are often not considering the long term effects if their current situation has a chance to improve. And that is precisely what government does.

Government often consists of individuals only appointed or voted into public office for a term with a limited-duration, therefore, these individuals often implement policies that benefit people in ways they think they want NOW, because people want instant gratification, and those who come after, well, it's not their problem because often they are no longer still in office. Or else they are still in office, and tenured with no limit on their term, therefore, they have nothing to lose, being they are often, in practice, above the law and rarely get prosecuted in the way someone of their status should, in the same way anyone else is subject to the judicial system.

This recession was entirely man-made, and entirely avoidable. Those who were sick, stay home, those who are vulnerable, socially distance and get aid from healthy individuals for basic needs. Those who are healthy and young have a very very low death rate, therefore, establish some level of herd immunity, and/or wait for the vaccine, and do what you can do, reasonably, in the mean time, to mitigate your own personal risk.

Most everyone was ok with social distancing especially at the beginning when it was logical, if inside in an air conditioned room, and even with isolation and quarantine for a limited time, when necessary or beneficial. The problem was it wasn't limited. It was indefinite; it was too long, unnecessarily long, only to end and have transmission rates skyrocket again around the end of the year.

Even with vaccines, being vaccinated never reduced risk of transmission, it only reduced the risk of the individual from serious infection and death from Covid, it didn't prevent them from getting it, and it didn't prevent them from spreading it. But double and triple masking, the lack of transparency from government, swapping back and forth on claims made in one direction and then in another, saying people can't even go outside, or must socially distance outside, and limiting travel, despite airplanes never being a significant cause for transmission. The government FAILED. It failed. Everyone needs to understand that, accept that, and acknowledge that, and then move forward.

The worse problem is, despite the last decade or two of terrible economic, foreign, and health care policy, except for the years of the trump administration when it comes to foreign policy regarding trade and international relations, now the government is attempting to seize even more control using the excuse of "needing preparation for THE NEXT pandemic....or THE NEXT national/international emergency" because that is just what government does; it aims to seize all control so there will be no resistance. That way they can ensure all of their agendas pass, creating a way to maintain the status quo, because these people act, and live as though they are above the law, because they know everything, they control everything, and they own everything, and they maintain conflicts of interest to ensure infinite spending for their agendas masked by scheduled/planned inflation and the devaluation of currency, at a higher rate/faster pace, than the interest on their debt.

The wall streel journal has failed in the context of journalism, and now often acts in the best interest of the governments, not the public. Journalism exists as a power for the people, but journalism is dead, because there is enough power on the side of those in power to be able to take the power away from you, the public. It's sad to see what the organization has become: a propaganda outlet for the left, big tech, and government special interests. There are some individuals within the organization that are trying to swim upstream against the current, but they are few and far between.

Reality is very few trust what they hear, read, or see in the news, media outlets, or journals anymore. (As they should question it and identify the truth for themselves, but more importantly have the access, the resources, and the tools to do so.) However, this is precisely why legacy media and propaganda outlets will soon be replaced by individual podcasts and radio shows who are not subject to ensuring their content protects their sponsors and special interests. Content like what the FST Podcast - Free to Speak and Think is attempting to do. Like the JRE, at the FST podcast, we aim to have open, civil, interesting, thought-provoking discussion where the main goal is to get to the truth, by allowing everyone a voice, and challenging opinions and perspectives to get to the root of the problem, and identify the best solution/path forward, based on having access to as much information as possible, all while never implementing any form of censorship.

Over time, when put to public scrutiny, truth logic, evidence, and history will all reveal the bad ideas but the process of thinking of many bad ideas in pursuit of one good one is not a bad thing. We need thoughts and speech to be encouraged, and truth to be identified! If not, we have a foundation that cannot withstand the storm and it will wash away, as will everything else not rooted in objective facts and absolute truth.

"The Truth Will Out." - Muggles [Arthur Weasley] (Sorry, had to quote Harry Potter as the quote was so fitting here.)

Husband, Father, Talkshow Host/Podcaster, Server. Born in 90's both Millennial and Gen-Z. I love learning and have an open mind. I'm looking forward to having my mind changed amid the process of trying to better understand people/the world.

More stories from Peter Thwing and writers in Journal and other communities.