by Malia Hebert about a year ago in addiction

A self-reflection through conversation with an owl 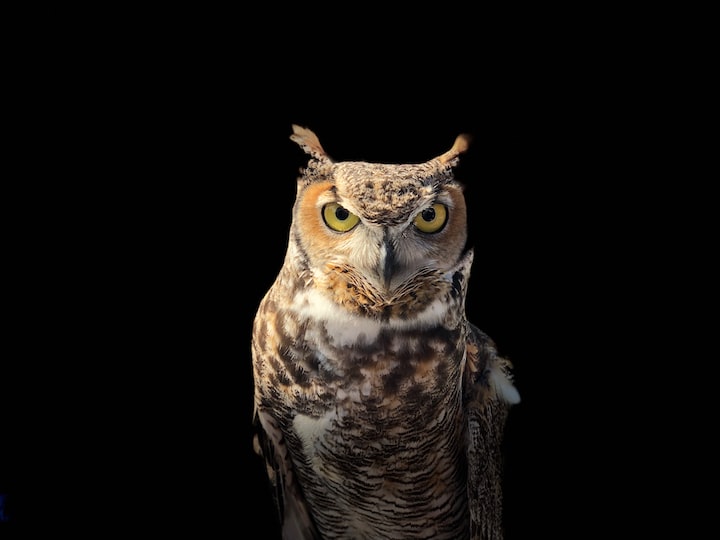 “Who? Are you asking who I am?” the young woman asked the mysterious voice. Her body trembled as her hands fumbled with the bag of powder. She knew it was poison to her body, but she also knew how it made her feel for just those few brief hours.

The woman looked around her and sighed. For just a second, she put the bag down. She thought about calling her sponsor, but then she decided against it. Just this last time, she promised herself. Tomorrow I’ll call my sponsor first thing and start from day one again. She had been in this same situation many times before, always cleaning up, always landing good jobs and being a good mother, but always just for a while. The incessant gnawing in the back of her mind was always there, no matter how hard she tried to ignore it. Her dealer’s number had been deleted from speed dial, but the memorized digits floated in her head all day and all night. And when the feelings were too much to bear, when her worries overwhelmed her to the point that she could no longer function, those digits were a welcome friend.

The woman looked across the barn and spotted the great owl up on a beam. Beneath him were empty packages, bent spoons with burn marks on the bottom, beer and liquor bottles, and used needles scattered all over the floor. She had discovered this place so long ago, she forgot which one of her “friends” had first showed it to her. A rundown barn behind an abandoned farm; the exterior screamed “stay away,” but the interior yelled, “welcome, all ye who seek escape from reality.” At least, that’s what she used to think. Now, she wasn’t sure what she thought.

Bring, Bring, Bring. The woman looked at her phone. It was the babysitter. “Has it really been two hours already?” the woman asked the owl. She had been a good mother. She made sure her baby was taken care of before she left for the “movies.” Sure, she knew she’d be longer than the couple hours she paid the sitter for, but she also knew the young girl was responsible. “She’ll figure out something,” the woman reasoned. At least my baby’s safe.

“Oh, just stop already! Sitting there with your big, judgy eyes! You think you’re better than me? Why, you’re nothing but a barn owl!” Well, actually, I don’t think barn owls hoot, the woman thought. She laughed at herself. “I know, I know, you’re a messenger of God, aren’t you? Trying to convince me to put this down?” She waved the bag in the air, showing the owl. “Although that doesn’t really make sense, does it? Because supposedly owls are bad omens. Maybe you’re an angel of death in disguise.” She had spoken the words as a joke, but the silence that followed was eerie. Maybe you really are here to collect my soul, the woman feared. But would that really be so bad? The thought scared her. She didn’t know what she wanted anymore. She didn’t want to feel sad and alone, but she didn’t want her only feelings of euphoria to come from this artificial happiness, either. There has to be something better.

“Who do I have to live for? Well, a lot of people, actually. My daughter, for starters. I want to be a better mother for her, honestly, I do! And my own mother. She has never given up on me, not once, no matter how many times I’ve let her down, no matter how many times I’ve lied to her, or worse—.” The woman thought of all the times she had stolen from her mother to fuel her addiction. She felt ashamed, she really did, but when the “itch” came she didn’t know how else to scratch it. She had tried meetings, which worked for a while. She had tried church, which also helped. She tried focusing on the perfect little features of her only daughter. But no matter how much “help” she received, she just wasn’t strong enough to fight the call of the demon living inside her, urging her towards her own destruction with the false promise of happiness. But the happiness never lasted.

“Who do I blame for this existence? Well, I used to blame everyone else. It was anyone and everyone else’s fault I turned to drugs. But now I’ve come to realize it was really me all along. Sure, different people helped lead me down this path, but ultimately the choice was mine.”

“Who can lead me away from this path? Well, the answer is the same—me. I am the only one who can choose the path I’ll take from hereon out.”

Suddenly, the woman heard a screeching sound outside. She tensed in fear, then she laughed as her shoulders relaxed. “Now that is a barn owl!” She looked up at the owl on the beam and winked, “But you are my barn owl.”

“I know, I know. I should just put this down and walk away. It’s not too late.” And she tried, she really did. But her fingers instinctively opened the bag and got to work preparing the poison. “This is the last time, I promise,” she said, both to the owl and to herself.

“The question isn’t who I am,” the woman responded, as the feeling washed over her, and she slipped into oblivion. “The question is—who will I choose to become?”

More stories from Malia Hebert and writers in Psyche and other communities.