by Malia Hebert about a year ago in dating
Report Story

A first date and a glass of Merlot 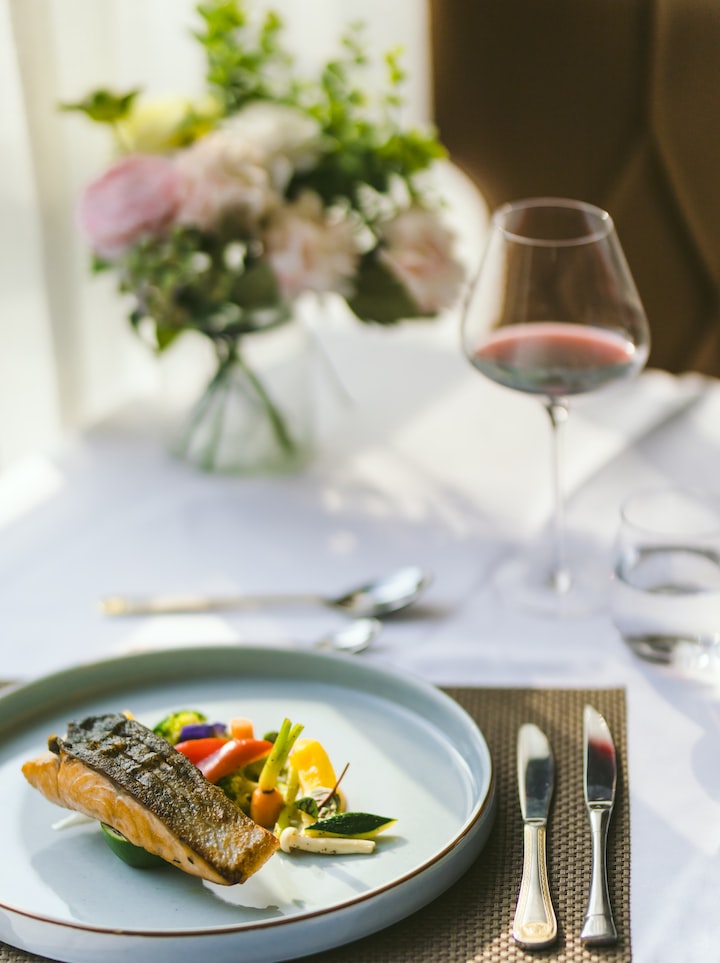 Photo by Hanxiao on Unsplash

"Sorry I'm late," Maria said as she came to the tablet.

Charlotte never would've been late, Jeremy thought to himself. In fact, she would have been ten minutes early.

"Oh, it's no problem," he said aloud, but inwardly he counted: strike one.

Maria unbuttoned her fancy coat and placed it gingerly across the back of the chair.

A coat with buttons? It's elegant to look at, but it doesn't look very functional. A hardy hand-me-down winter jacket would have been Charlotte's preference. Sensible, thrifty Charlotte. However, I won't count that against Maria, not just yet anyways. Maybe she's just dressed up for our first date. It doesn't necessarily mean she's high-maintenance.

"So, how do you know David again?" Maria asked.

"We met online playing Call of Duty one day," Jeremy responded. "We started as cyber friends, but come to find out, we live only a couple miles apart! What a small world."

"Yes, quite small," Maria responded with a smile.

Well, she has a nice, genuine smile. One point in her favor. Breaking even. Then, Jeremy thought of the way Charlotte used to smile at him.

"Is something wrong, Jeremy?"

Jeremy composed himself. "No, sorry. I just got lost in thought."

The waiter approached their table. "What would you like to drink this evening?"

"And I'll have a glass of Merlot, please."

Jeremy winced. A wine drinker. Charlotte never liked wine. She could knock down cans of beer like one of the guys though. Jeremy chuckled silently at the memory of all the parties he and Charlotte had attended in their younger years.

"And how do you know David?" Jeremy asked.

An unnatural silence followed. Jeremy had forgotten how awkward first dates could be.

"What do you like to do for fun?" Maria asked.

Another awkward silence, until he realized he should probably ask her about herself.

"Oh, I like to just curl up some place comfortable and read."

Charlotte liked reading too. Another point for Maria.

Maria sipped her Merlot. For the first time since they'd sat down, Jeremy really looked at her. She was tall and thin, with her chestnut hair tied up in some sort of modern twisty thing (the only term Jeremy knew was "ponytail," which had always been Charlotte's hairdo of choice.) He looked at her face, which was just the right amount of round. And her eyes...her eyes stared back as if they had known him for their entire existence. They were the brightest green he had ever seen (not dark brown like Charlotte's, he added almost as an afterthought during his assessment). The comparisons between her and Charlotte in his mind were starting to dwindle, and he started really seeing Maria for who she was. As he got lost in Maria's entrancing eyes, he almost forgot to breathe.

"You know," Maria said, shifting uncomfortably. "David talks about you a lot. He has for years. I feel like I've known you forever just from all the stories he tells."

Jeremy smiled. David was a good guy. He felt embarrassed, however, that David had never mentioned Maria before he set up the blind date.

Maria reached across the table and took Jeremy's hand. Her hand was soft and made him feel a way he hadn't in over a year.

"I feel like I know Charlotte, too," Maria said quietly. Hearing the name come out of this other woman's mouth felt like a stab to his heart. Jeremy flinched, but then calmed his racing heart. Maria could sense his uneasiness but never recoiled.

"It's okay..." Maria reassured him, "if you aren't ready. David wasn't sure if you were yet or not."

Jeremy felt the tears brimming in his eyes but he didn't respond.

"A little more than a year," Jeremy answered.

"Cancer sucks," is all Maria could say.

There was a moment of silence, and then Jeremy started laughing. "Yeah...cancer sucks."

It had been a simple statement, but it had been effective. He didn't want to forget Charlotte or pretend she had never existed. But he knew she would want him to be happy. He needed to stop feeling guilty for being on a date, his first date, since her death. He trusted David, so he should give Maria a chance.

"David loved her, too, you know," Maria continued. "She was 'one of the guys.' I used to love hearing about all the shenanigans you all got into!" Maria laughed, a welcome sound to Jeremy's ears. It was a cute little laugh, not loud and boisterous like Charlotte's had been.

Dinner arrived, and they enjoyed a nice meal full of story-sharing and laughter. As the plates were being cleared, and before dessert was delivered, Maria looked into Jeremy's eyes again. This time, her eyes spoke of a possible future...if he just gave her the chance. She wasn't Charlotte at all, but she was Maria. She was cute, she was funny, she was intelligent. He wouldn't mind a second date. Maybe even a third and a fourth!

"I know I'll never be her," Maria whispered. "Nor do I expect you to forget her. All I'm asking is that you give me a chance. Maybe I'll be able to make you as happy as she did...in my own ways."

All he could do was nod his head. As she daintily sipped the last of her Merlot, he refrained from comparing it to the way Charlotte chugged beer. He smiled.

More stories from Malia Hebert and writers in Humans and other communities.