Abuse has its own demons!

by Teresa Hurley 2 years ago in trauma
Report Story

Child abuse has abundance of changing who that child is through adulthood. Mask through times. 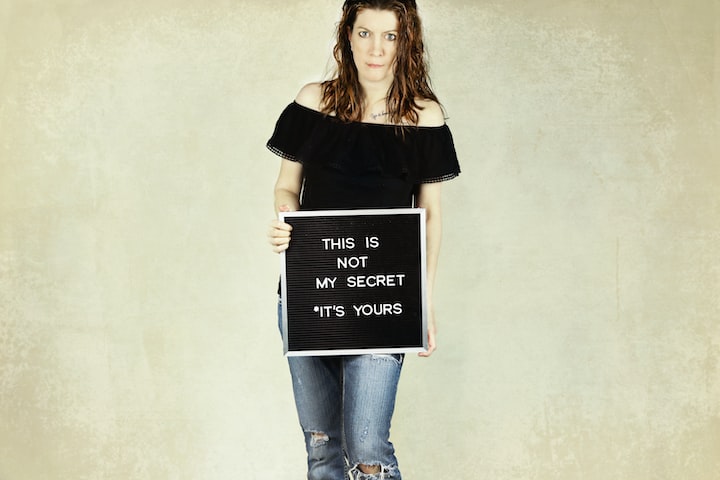 Being in a childhood full of distress and dismay, hurts and is painful growing up. Trying to adult with the toxic life that was given to you is hard in itself. There is either failure or success. Unfortunately it is rarely in between. Some days I feel like I am just surviving this life. Some days I feel like I am a failure to my own children. My children will always be number one in my life, because of the trust I seem to not have in other people. It gets hard to question their existence and actually feel like they are safe with any human being. My life was just like everyone's life. If you really just peaked in for once, you would think that my life was wonderful. My life was less than normal and defiantly something people can relate to. My story starts truly when I was four years old when my parents decided to divorce and my mom running off with other men, all the time. There would be weeks upon weeks until we seen her. It was the worst. As a child, emotions ran through me wondering why I was never good enough for her. Why she was always leaving. My dad was around and had to work full time to keep food in our mouths, so I understood that part. He always provided no matter and made sure we had what we needed. I did lack on some emotions with him for being my dad. I really felt disconnected from him where I needed a parent in my life to stay. When my parents divorced, it was the worst. I remember my mom saying stuff to me about my dad. She would share bad stories of my dad. I remember it making me so mad and actually start hating him at some point. When I was five, my dad met my stepmom. They ended up marrying when I was six years old. I really hated my step mom. I remember being so mean to her and always wanted my dad and mom back together. I was deceived as a brat, but honestly, I wanted my dad and mom back together and it had nothing to do with her. When people marry in with other children, it is good to remember that it is not always about you, but emotions behind it, because they are still trying to process what really is going on. Many children can't grasp that until it can be clear to them, or even explained to them better. My step mom has three children. Two girls and a boy. It was five kids all together. I was the oldest. The ages was from six, five, four, three, and two (the two youngest were like the same age for a couple months). All I could think about was Cinderella. How they took my dad from me. It was not the same anymore. My dad was different from my step mom, my feelings were that he was more with us until he was married. I really never felt any love off of him. I remember following him around when I was younger because I wanted his attention. I remember the feelings I had when I figured out that I was a girl so it was not really good to teach me guy things. Little did he actually know, I am so much like him. I learn quickly and only need to be shown how to do it once. I felt angry for that. I remember living with my mom and my dad only taking my brother and leaving me. It made me furious. I did take it out on my mom. It broke my heart. I don’t even think he knows that from this day. I really don’t even know his family either. That really bothered me my whole life. I always doubted if I was actually his daughter or not. I always questioned why I never looked like him or my brother. Children's mind wonder when they are younger and if we are not careful for what is said, then it can be blown out of proportion. One thing I learned about being a parent to my children, is catching myself do the same thing my parents did. I don’t know if it is from habit or because it was done to me in the long run. How I process things to understand it.

As time passed, my mom was always in and out of my life. She would be chasing other guys and really not caring where we were. She honestly left for months and then came back when she felt a way. I learned later in my life that I basically was a throw away child that no one clearly wanted. Actual words from my stepmom. It was really horrible to hear, but it really made sense to me after there. I understood what she met. Why did my parents let me go back and forth? Why was the abuse I was going through not stopping. Did my dad really know what was going on with me or us? It was bad with my mom. Her many boyfriends of abuse really took a toll on all of us kids that lived with her. It was like a horror movie wondering what their attention was going to be like and how they were going to do it. One guy my mom dated took one of my brothers in a pillow case and swirled it around and almost suffocated him. That man that did that to my brother found it to be hilarious. My mom didn’t even care. They used to lock me in my room for 8 hours a day. It was bad. She never really stopped to care, because it didn’t effect her yet. When it actually effected her because maybe an argument, then we would leave. It was exhausting. So many things happened behind the scenes. I lost track of places we moved and the kids I actually had to try and make friends with when we were there. To be honest though, I was made fun of. I was called so many names in the book. I was always the odd person in the back. I so did grow up not knowing myself and feeling worthless as a child. Understanding this, this actually hurts a child self worth. It hurts their well being and hurts who that person is. You will just fall in a same position like your parents, unless you want to do better then the next.

As time carried on my mom was involved with a real charmer who endangered our whole family. He was what we called the living demon of time. This is what you would call a story that would never be able to unrest without any justice to it. Not a story for the weak minded. That will be told more in my other story.

More stories from Teresa Hurley and writers in Psyche and other communities.