Beware, When The Shadows Call

The Goblin's Will Get You, If You Don't Watch Out 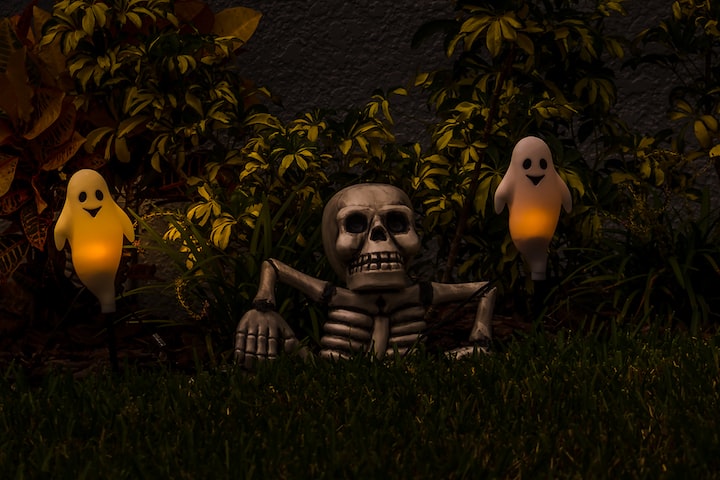 Photo by Dawn McDonald on Unsplash

The cabin in the woods had been abandoned for years,

but one night, a candle burned in the window.

Even after all these years, no one dare mention his name,

or how eerily that flame again, began to glow.

It wasn't the first time that candle was burned,

they paid a steep price to be rid of his games.

But when dealing with the devil, and the trading of some souls,

the lives you knew, well, will never be the same.

They constructed a wall to keep the cabin out of sight,

to stop him luring victims to his lair.

Disappearing bodies, leaving nothing but their screams,

some sleeping bags, tennis shoes and strands of hair.

But, like a scary story at a campfire late at night,

And the moon peeks through the clouds, like an eye up in the sky,

casting shadows, bringing it all back to life.

If you listen closely, you'll hear whispering in the dark

Leaves rustling in the trees, telling secrets that were kept,

as the wind gently calls out the name, "Dw-wight."

Now, Dwight once lived here in this town, in fact, up in that little cabin,

he was mean and vile, and full of ill intent.

He terrorized the neighborhood with his crazy games and magic,

until they did the deed that forever will torment.

The scene was set, as they paid their debt,

but two wrongs rarely ever make a right.

They had no idea the kind of evil they invited,

until events that led up to that night.

Many heard him cry for help, though no -one even thought to check,

they made up their minds to no longer be his fool.

The screams went long into the night, he begged them, "help me please",

they had no sympathy for one who'd been so cruel.

No one speaks about him or the day that he went missing.

In fact, there were new rules about games to play.

Nothing to scare or make nervous the few,

who remembered life before Dwight was betrayed.

Ring around the rosy hide and seek and kick the cans,

Games we played, to maintain the innocence of life,

oblivious to the monster lurking there.

He appeared from out of nowhere, offering to bring us to his cabin,

with the promise to do things we'd not done before.

Little did we know exactly what he had in mind,

or the terrifying horror he had in store.

The days were filled with swimming, riding bikes and hanging out,

a picnic on the beach, down by the lake.

We played so many games, come dusk, when the campfire began to glow,

tucked in our sleeping bags, we could barely stay awake.

He told us funny stories bout' some clowns and jumping beans,

Then, he told us how they killed him, and he'd come to make it right,

our laughter turned to screams, as the light lit up his chin!

stirring fear we didn’t know we held inside.

Escaping our from our lungs, out into the midnight air,

we all shivered as he told us how he died.

A smile crossed his face as the laughter left his lips,

he said, “no one will answer when you scream“!

They will leave you as they left me, all alone, out in the dark,

to be devoured by the monsters in your dreams!

He zipped and tied us tightly, so we couldn't move or shout,

he whispered something in a growl that haunts me still.

“And the goblins will get you, if you don’t watch out!!”

Thank you for your time in reading my twist on the campfire story.

The line at the end is borrowed gratefully from an 1885 poem written by James Whitcomb Riley. Read to us by my father, with a flashlight under his chin.

Telling stories my heart needs to tell <3 life is a journey, not a competition

If you like what you read, feel free to leave a tip, I would love some feedback

More stories from Kelli Sheckler-Amsden and writers in Poets and other communities.