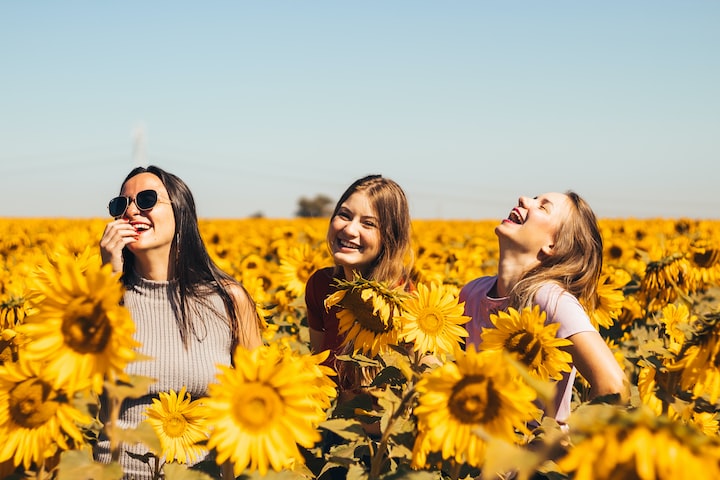 When I was younger I was a ball of fire, always ready to get into the argument and state my opinion, even if it wasn't popular. In my relationships, I would get upset and state my mind, in detail, and one time I got so mad at my husband I slammed the cupboard door until it banged closed, open, and closed again. I was angry and everybody knew it.

The years went by and I had a hard time making and keeping friends, especially women. They never seemed to like me, and that didn't bother me. I got along with men better anyhow. Unless I married them, that is.

After four failed marriages I found myself living in a subsidized apartment in southern Colorado. The car I drove was a real piece of crap. It was a Toyota sedan, and every time I pulled away from a light I left everyone behind me in a cloud of thick, gray smoke. I was in my fifties, and surrounded by those in their seventies and older. My dog was my only real friend. I was slowly learning what I kept giving up, and what the consequences were, and why was that? I couldn't shut-up.

I decided to take a break from men, and from life in general. I was collecting disability for a bad heart, and had time to think and figure life out. I grew calmer, more focused and really began getting into my art and writing. I self-published a book on Amazon with the help of my youngest son; a book I had been trying to write for twelve years. A story about a lodge where I'd lived in one of my failed marriages, and the lodge was haunted! Pictures on the wall would be crooked in the morning, and the speakers in the kitchen, great big speakers, went flying across the room and were destroyed when they hit the wall. Definitely, this book was on my bucket list!

I have an active creative life, I always have, and spent time making vacuum cleaner covers and selling them on the local selling site. I made snowmen and sold those, as well as pictures I drew of fairies that I sold on ebay. One man bought every fairy picture I drew for almost two years, and he sent me a photo of all of them hanging on his wall, framed. My time has always been busy, and when I wasn't creating, I was walking with my dog or catching up with a friend on my computer.

The biggest thing I discovered during the eight years I spent without men and outside influences, was that I liked myself. Once you finally like yourself, know yourself and still feel good, it changes your entire outlook on life. You laugh more and easier, you realize others are on their own journey, and you let them walk their path without interfering. You learn to stop arguing; mostly because anger is an emotion that very rarely shows up anymore. I have found I am happy from the inside and have more friends. I have a relationship with a difficult man that I have turned around into an enjoyable relationship, just from knowing when to shut-up and when to stand my ground, and how to stand my ground; with few words that are filled with logic and not anger or accusation. It's amazing how changing my attitude changed my life.

I find happiness in the sun shinning in the windows in the early morning, listening to the birds sing, working on my paintings, and playing with my dog. It all holds such beauty!

More stories from Denise Willis and writers in Humans and other communities.