In The Middle Of A Long Cold Winter 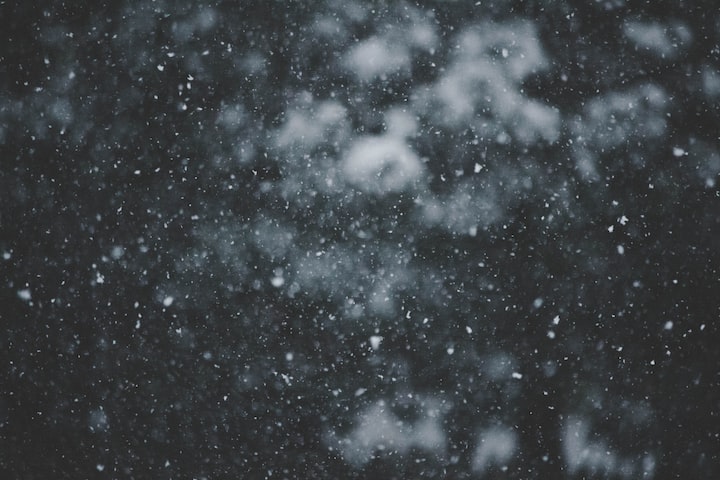 Music echoed down the hall of the shotgun cabin as the wind picked up speed outside. A choir of trees rustling harmonized with the constant low roar of the wind itself. The record player skipped over its usual spot- pulling Peter from his stupor for a single moment. The feminine voice carried on like nothing had happened, like the vinyl she was permanently attached to wasn't damaged at all, and the only thing that mattered at that moment was finishing her song. It some opera piece from the fifties Peter's brother would play to feel like an intellectual again, even though the man had not set foot in a university since leaving Home.

He stood in his bathroom, the overhead light casting elongated shadows over his face. In his own opinion, he looked far too old for his actual age. However, in his thirty-six years of life, he had lived more than enough of life's events. It was time for him to settle down. Whatever that meant. He laughed to himself at that line of thinking. He had settled down once, and then it didn't work out, and then he did it again, and it didn't work out, and again and again and again, like his life was a hook to begin and end as a marker. Sometimes he wondered if this time here at the cabin wasn't some sort of test for him, an audition that he never signed up for and he never would know the results of. He put his hands on the side of the porcelain sink in an attempt to ground himself.

Peter took a sharp breath in, forcing his lungs to expand to full capacity before relaxing and venting through his mouth. Something was off. It was as if he were tuning a violin that couldn't quite hit the right pitch. Something was off something had to be wrong in his tiny home, in his tiny life, in his tiny world. He knocked over a blue container with a gold lid, spilling baby powder onto the tile floor. The subtly overwhelming scent of cornstarch leaped into the air as he met it halfway to try and contain the mess.

It was one of Katya's old things that he had knocked over. He refused to own something so delicate, much less impractical. If it were up to Peter, the powder would have stayed in the plastic tube they bought it with in the first place. But Katya was like that. Everything had its place with her, and everything needed to be in its place. Peter wondered if that was part of the Old World in her, some part that he could never have. She was born there, after all, while he was the first generation in his family to live so far east it became the West. They had gotten married in her home, and he brought her here the moment the paperwork was sorted out. Those early days were so happy in his mind. Yes, there were frustrating moments. Times where immigration and moving and building their own place seemed like an impossible piece to finish. But ultimately, they learned to go at life as a duet rather than soloists in those early days.

That was until they couldn't. They had a third coming along. In that moment of knowing for certain, yes, there was a third in the picture, their shared harmony shattered into a million fractiles of individual transactions. Sure, contributing his share had been fun, but Peter had no idea how to be a father. Katya had no idea how she could be a mother. It had always been just the two of them. They had always relied on a system of what can I do for you, what can you do for me. And it had worked. But as the months wore on, winter and Katya's delivery date drew closer and closer, and the couple soon felt more and more like two neighbors and a fence between them. Winter pulled Peter more and more outside, ensuring the house was warm and secure. There was always some kind of off-season project that needed doing. The house always needed some repair or maintenance, there was always some kind of work in the little village five miles south.

In those days, Peter felt like a businessman in the city. He would go to work in the morning with his lunch packed and coffee in the cupholder of his snowmobile. In the evenings he would come home to his wife and unborn child and they would eat dinner together. Katya had taken up cooking recipes out of the collection of family cookbooks during her pregnancy. Her relatives back home didn't believe her when she told them in a letter. After they ate, Katya would gather the dishes and wash them before placing them back in the cabinet where they belonged. Then they would put on a record or listen to the radio on the rare days when they could get a signal. Katya liked to listen to a talk show hosted out of Fairbanks. Peter never said anything, but he knew Katya liked the sound of the other man's voice more than his own. It made a pang of jealousy fill his heart, but that was shaken off when the wind shifted the trees around them and the signal was lost. They talked to each other, but they didn't say much.

But those days could not last long. The baby was born in their home right on time at two in the morning. The doctor delivering him, a greying man that had delivered every child born within a fifty-mile radius of where they were standing, claimed he would be a healthy toddler before the two of them could blink. The man left in the dark of the morning hours and the two of them were left to pick up the pieces of bringing their son into the world. He was healthy, he was eating, he was extremely vocal. There was no way that aspect came from Peter's side of the family.

Peter went into town less and less as winter drew in. He wanted to make sure that he would be home whenever the inevitable blizzard hit that would snow in the town for a few days. One part of him couldn't help but wonder if Katya would want another child to be brought into the world nine months after this year's snow in. The other part of him hoped it would be true. Maybe then she would want him again, not the man on the radio, or use the baby as an excuse to constantly be in another room as him.

But one day he was called into town by an old friend. He needed help on a project that he knew Peter would be good at, and they could be done in less than six hours including traveling time. Katya encouraged him to go, as he had stayed with her for the last three days, and "surely you miss seeing the villagers every day as you used to." He had left with the feeling that maybe he should stay but ignored the feeling for the opportunity to maybe have something different.

He came home to a silent house that afternoon. He found the note in the empty crib. Katya was gone, taking the first flight back to her home and taking their son with her. She hadn't taken much with her, including the baby powder in the bathroom and the money Peter kept in the safe. He wondered how far she had gotten before the baby started crying again. He always let the rest of the world know when he didn't like something. Then again, it wouldn't benefit her long term to take either, where she was going. In the days after she left, he thought about following her. Of getting the police involved. Of chasing her across the world and bringing her back to this place and keeping her here permanently, one way or another.

That was last winter, and the first snowstorm of the next season was well underway. Peter noticed the record had stopped playing, needing the disc to be flipped over and started on the B side. He finished cleaning up the powder off of the floor and picked up his razor from the other side of the sink. It was going to be a long winter, but he could stick to his routine.

Hello! I am a novice writer looking to give voice to some of my underdeveloped writing styles/genres. If you like what you read, please consider tipping as it would help me out a lot!

More stories from Lee Andrew Butler and writers in Humans and other communities.