What I've Learned from Working as a Lesbian Escort

Straight women who've never had gay sex often want to try everything at once. One second they want to eat you out, the next they're standing there with a strap-on. 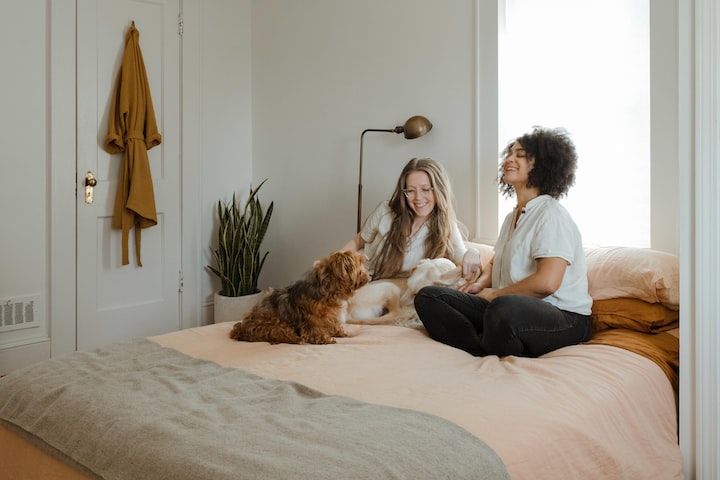 Photo by Chewy on Unsplash

I was still in college when I lost my part-time job in a nursing home. I knew that whatever my next job would be, it had to be flexible and it had to make me lots of money within a short space of time. That's how I ended up working as an escort. I'd worked as a burlesque dancer in Amsterdam before, so I wasn't a stranger to the sex industry and had always been attracted to the world that surrounds it.

Being gay, I wanted to work for an agency where I'd only have sex with women. But at the time, I honestly didn't know if lesbian-only escort agencies existed. I wouldn't have minded working for a regular agency, but I knew that I didn't have much to offer a man. I'm not attracted to men and I've never had sex with one, so making them pay to have sex with me seemed a bit unfair, and I'm pretty sure I wouldn't have felt that comfortable either.

It proved very difficult finding a women-only agency in the Netherlands, but I eventually stumbled upon "Audrey Segal," a firm founded by two lesbians. When I arrived at their offices, we talked about my feelings toward the sex industry, about protecting both my boundaries and those of a client, and they asked whether I knew how a strap-on works. Before I knew it, I had a new job.

The most persistent myth is the idea that scissoring is the main activity during lesbian sex; that's definitely not always the case. Besides that, lesbian sex often follows a different pattern to heterosexual sex—it's usually slower, starting off with a massage and a bit of kissing before you gradually take some clothes off. Most importantly, nothing is mandatory. If you change your mind halfway through us making out, that's fine. Working as an escort, I quickly learned the importance of communication, both before and during sex. I want my clients to feel as comfortable as they can be. That's actually what makes sex work so appealing to me—you help someone discover a new form of intimacy from their position of control.

Interestingly, I've also had clients who've never had sex at all but want to practice before they end up in bed with someone with expectations. My youngest client, for example, had known for a long time that she was a lesbian, but was still a virgin, simply because she didn't know how to go about having sex. My oldest client had a similar story. She didn't come out until she was 89 years old, so came to see me because she wanted to finally know what it's like to have sex with a woman.

There is another client I'll never forget. She had previously been raped, and after she told me what had happened we gently discovered each other's bodies. I tried to make her comfortable and explain that she shouldn't feel as if she had to do anything that she didn't want to do. At first, I noticed that she found it difficult to set boundaries, but after talking her through it she started to respond to my questions, which allowed us to find out what she liked and what she didn't want. I really saw her opening up during our session, turning it into a lovely experience for the both of us.

Being a part of such a sensitive and special moment in a person's life is an incredible honor. You might not expect it, but those few hours can be a really intense experience for both parties, as people's true emotions tend to come out during sex. It can be a very profound experience.

Compared to what I hear from escorts with male clients, women don't seem to have very strong demands when it comes to the way I look. They usually just have a quick look at the short introductory text next to our names on the website, but if they want they can always ask us to send them a photo or to wear something specific at our session, such as red lipstick or black lace lingerie.

I love my job for its intimacy, but I still deal with a lot of lingering prejudice. My friends and relatives all know what I do for a living and are absolutely fine with it, but occasionally I'll have an acquaintance who thinks it's cool to bombard me with tons of incredibly personal questions. As a lesbian woman, though, I'm used to that to a certain extent, but the fact that I'm also an escort often makes people think they can literally ask me anything they want, like how I get women to orgasm, if I use sex toys, and what my hourly rate is.

On the other hand, I can't really blame them—female sexuality still seems to scare us as a society. Neither does it surprise me that many women are hesitant to visit the red-light district looking to pay for sex, as they'll be regularly approached by men asking them whether they can film or watch them having sex. Unfortunately, some people still see lesbian sex as something exotic and odd. It's important for us to shed that stigma without losing the excitement that comes with it.

For quite a while I tried to distinguish between "Velvet"—my sex worker persona—and the person I am in my private life. But the more I thought about it, the more it became clear to me that these two different characters have merged into the same person. That used to bother me sometimes, and I wondered if maybe I was showing too much of myself to my clients. But in the end, I realized that I don't have to keep these two worlds apart. I am who I am, and Velvet is a part of that.

More stories from Audrey Segal and writers in Filthy and other communities.