SS
by Secretly Seductive 23 days ago in fetishes 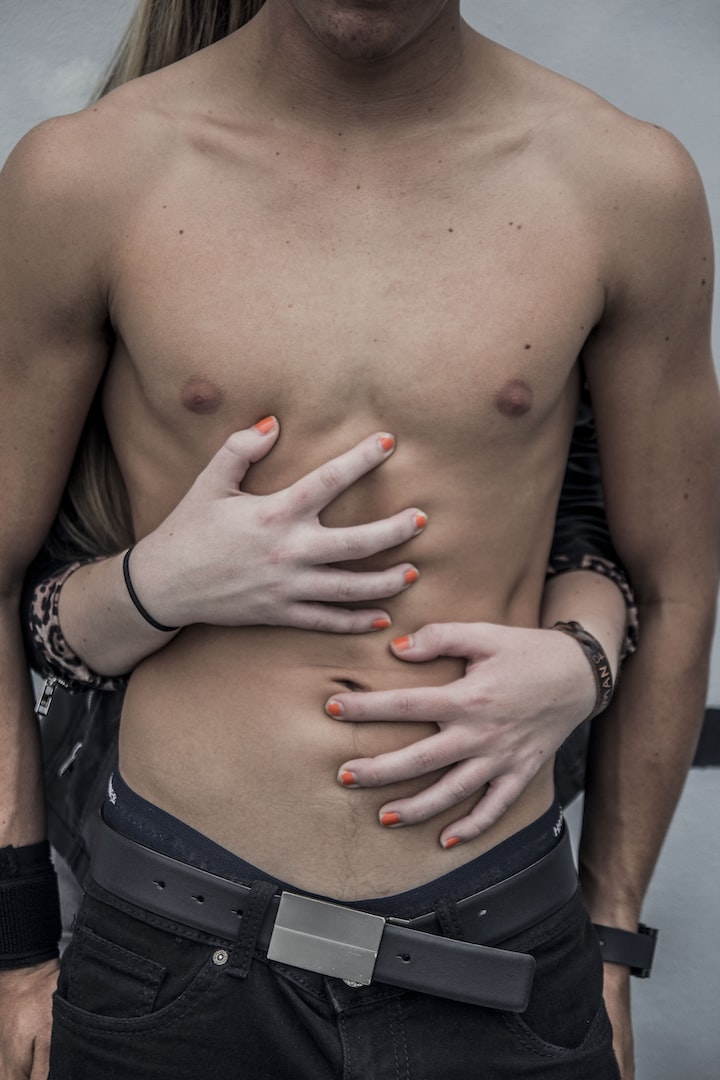 Photo by Erik Lucatero on Unsplash

James hovered over Annabelle who lay in the long grass, threatening her.

‘I have a knife’ Annabelle warned. ‘Oh yeah? Let me see it’ James smirked, knowing she didn’t have one. ‘You’ll only see it when it’s lodged into your spine.’ He stared into the eyes of Annabelle...he had never seen so much insanity in anyone's eyes before. They were fiery and wild ‘Even then you will not see it, but you will feel it~oh you will feel it.’ Annabelle laughed wickedly.

He was afraid, but only for a moment; then he pulled his knife out of his pocket and waved it in front of her face. ‘You mean like this knife here?’ he taunted. Annabelle looked at the blade, then she looked James in the eyes.

She maneuvered so quickly, he didn’t know what had happened. She grabbed the knife out of his hand and wrestled him to the ground, pinning him between the soft grass and her body. She looked down at him and smiled, rolling the blade between her fingers. She moved the blade across his lips ‘Wanna know how I got these scars?’ She said, in the most seductive voice he had ever heard. She brought the blade up to her own lips, and slowly licked it from the bottom to the top. ‘Nobody is going to get cut today’ she said as she threw the knife into a tree in the distance.

She took the twine out of her bag and tied his hands together above his head. She could feel his manhood become hard beneath her. She started to undress him, pulling his pants down to his ankles and restraining them with his belt. She pulled his shirt up over his head and placed it behind his neck. He became even harder and he started to sweat. She picked up a switch from the ground and struck him in the side with it. He let out a yelp. Still sitting on top of him, she bent down until her face was directly above his and put her lips right by his ear ‘Don’t ever threaten me again’ she whispered. James gulped. Anabelle looked him in the eyes and narrowed her eyes, ‘Do you want it?’ James was breathing heavily and sweating profusely. Annabelle slapped him in the face causing him to cry out. ‘I asked you a question!’ her voice full of authority as she grabbed his hair and pulled it, forcing him to look at her. If he had said no, she simply would have gotten up and walked away, leaving him there to think about his transgressions. ‘Yes’ he said. Annabelle wasn’t surprised by his answer. She got up, and undressed herself before getting back on top of him. ‘You will make no sound unless you are told to’ Annabelle told him. ‘Is that understood?’ James nodded his head. She struck him with the switch again. ‘Speak!’ she demanded. He cried out in pain again. ‘Yes ma’am!’ James exclaimed. Annabelle bent down and kissed him where she had struck him. His penis throbbing, anticipating the moment of impact. She teased him, setting on top of him directly above his manhood, giving him a taste of what he was about to receive. Annabelle looked him in the eyes again. Her eyes were even more crazy than before. She placed her fingers inside of her pussy to wet them. Then she grabbed his nipples and squeezed them, twisting them before placing her mouth around them and flicking them with her tongue. He moaned.

Annabelle put her hand around his throat redistricting his airway. ‘I told you not to make any noise!’ James gasped for air, his manhood was going wild. She released her grip from around his neck, and slapped his manhood with the switch. He held back his scream. ‘You’re learning’ Annabelle smirked. She kissed his manhood, giving him some relief. He was breathing and perspiring even harder now. She looked him in the eyes dead serious. She grabbed him by his hair and said ‘you will not finish until I tell you to, do you understand me?’ She slapped him in the face again. ‘Answer me!’ she yelled. ‘YES!’ His voice was trembling as he spoke. She slapped him again ‘Yes what?’ ‘Yes ma’am!’ he cried. ‘That’s better’ she said as she teased the tip of his penis with the outside of her pussy. Suddenly, she slammed herself down onto him, wrapping her pussy around his manhood. Her up and down movements were slow and powerful. James moaned again. This time she squeezed her pussy, tightening it around him until he pleaded with her to stop. He wanted to finish so bad. ‘Don’t cum until I tell you to’ she said, bending down and biting his chest. She swirled her tongue over the bite marks. She loved the way he looked when he was vulnerable… she had complete control over him and she knew he loved it. She placed her lips on his and started kissing them, biting his bottom lip as she backed away. He took a deep breath in order to hold back his moan. She kept moving, up and down, up and down; soft and slow, and then slamming herself down onto him. She loved watching him try to control himself. She loved how hard he was, and she loved seeing him sweat. She knew it would be impossible for him to hold back much longer. She pulled herself up and started teasing him again. Rubbing her pussy back and forth over his tip until he was at her cliterous. She moved her clit all around his penis moaning each time it touched her. She looked down at him, he had tears coming out of his eyes. As if he were begging her to let him finish. ‘What?’ She asked him. ‘Are you ready to finish?’ ‘ Please’ he begged. She pitied him, but she slammed herself back onto him and started riding him again. ‘I should just stop until you can learn to calm down’ she scolded him. His lips started trembling. ‘Please don’t stop’ he begged her. She grabbed his nipples again, squeezing them and twisting them. He screamed out. She continued riding him, up and down, back and forth. Softly and slowly, and then hard and swift. ‘ Oh, YES!’ she screamed as she slammed down onto him again. She moaned as she looked into his pleading eyes.

‘If you think you have learned your lesson, you can finish now’ she said.

Before she had even finished the sentence, he had already started to fill her up with his semen. She screamed out with him as she orgasmed too. ‘Thank you’ James said to her in a voice full of relief. Annabelle playfully slapped him before she leaned down and kissed him. She got up and dressed herself, then she walked over to the tree where she had thrown the knife. She took the knife, and cut the twine from James’ wrists. Then she threw the blade into the ground directly between his legs, barely missing is manhood.

‘Now get back to work; I’ll see you at home’ she said as she walked away, leaving him to fend for himself in the empty meadow.

James began dressing himself as he watched her walk away. ‘Crazy bitch’ he said to himself, shaking his head back and forth. ‘She knows exactly how to turn me on’.

thank you to @forthewriters for the writing prompt