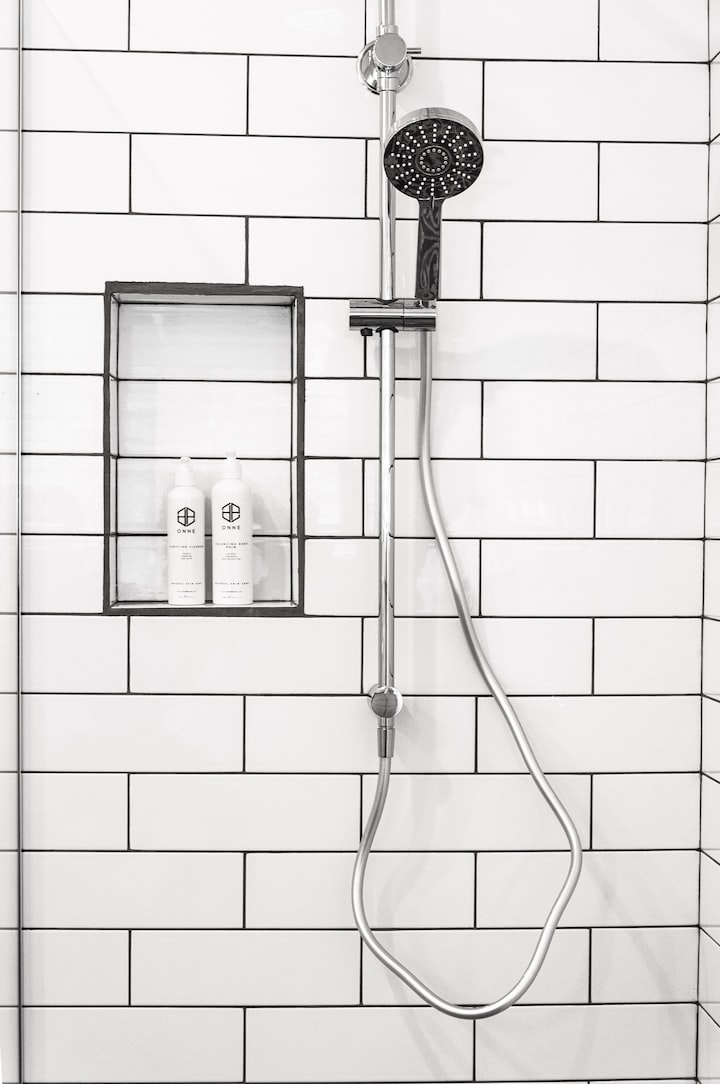 Photo by ONNE Beauty on Unsplash

"Not Happening Tonight!" I tell myself as I lock the doors and secure the windows to my home. I don't know who I am trying to convince...myself or the invisible person I seem to be talking to. "It's an addiction and it's bad for you!" I say out loud, again to nobody. As I walk up the stairs to my room, I feel the slow sinking sensation of loneliness set in, the deep fear creeping up my spine like a slow slithering centipede with its millions of itchy tiny sharp legs. It's over. I am the one that said no more so why do I feel so wrong. As if on cue I feel a purr between my legs. "Oh, Hell No!" I shout as I throw on the hot water in the shower. "I can do this; I can cut off any man because I am a strong independent woman." I lie to the water, as I slowly slide off my night gown and step into the hot steaming stream that would hopefully carry away my sorrows. Yet knowing deep down inside, that I was in for the ride of my life. Telling myself that no matter if he listened and stayed away or if he came for me like he usually did, I'd be ok. It was horrible and unhealthy but omg the sex was incredible. It didn't matter what happened between us, our bodies knew exactly what they wanted and weren't taking no for an answer. Addiction and yet.... I loved it. I've loved a man before, by my age most of us have. Rob was different. His body was molded from my fantasies of teenage years. His smile made the rest of the room disappear and the sound of his voice set my skin on fire.

As I stand under the water, I can't help but allow my thoughts to him. My sin, my addiction. All 6'2 inches of solid man that he was. My Rob, and he has been everything right for the lady between my legs and everything wrong for the woman that I am.....and I couldn't get enough of him, even when I'd had enough of him! We had been playing ring around the rosy

for years. Him, in and out of prison, trying to get his life right and be a better man. Me, in and out of relationships, trying to find someone that could deal with me and my mental illness. It was always a disaster. No matter how many times we tried with all pure intention of getting it right, it went wrong. Not just a little wrong, oh no, catastrophically wrong. Really early on we learned that we were each other's greatest poison and yet somehow, we kept coming back together to see if we would really die.

I gasp and my back goes completely rigid as I think I hear a sound, a click. The hair on the back of my neck stands up as my entire body listens for a sound I know realize I'm dying to hear. In this moment, a world between worlds, I realize that at the core of my person I don't care how the world burns as long as that man's skin touches mine. The pain in my gut is slowly silenced by the purr thru my body. The addiction calling out, yearning for a taste of the juices of your soul. My therapist voice rings in my head "Every time you let him come back Christina, you will need to start over. Are you sure this is really the time that you're going to lock that door and throw away the key?" she beckoned in our last session. War a complete and utter war was brewing between my heart and head. It was overwhelming.

"Yeaaaaa" I squeak out, trying to hide the utter excitement in my voice. "Just stopped in to grab my bag" he says to me in that raspy deep tone that tells me he hopes I playing friendly. I hear him let the door almost shut as he goes to grab his bag. As I stand there a million scenes play thru my head. Of him busting thru the door and climbing in the shower fully clothed but so full of need he doesn't even care. Rob would and had done that before so it could happen. I hear the door open again. "Hey, uh, it's kinda late and since the shower is going anyway, mind if I join? In an instant the shower wasn't the only thing making me wet. The shower door slowly opened, he was standing there only in his jeans, leaning one arm on the top of the stall door. "Is that a problem?" He says while looking directly and intently at the curve of my breast, which swelled with desire from the feel of his gaze. "Is the shower the only thing you want?" I sneer while watching his pants jump. "We have been fighting all week, isn't it time to make up now" He smirks and instantly he knows he wins. He smiles and I am ready to be his.

Off come the pants and just like that he starts carefully moving behind me in the shower. I feel his presence now like the heat of a volcano. His energy singing off his skin of a man that just spent all day working in the hot sun. His body smells of sweat and wood. Framing has kept him in wonderful shape. Meanwhile here I am eating every fattening food I can get my hands on trying to forget about this man. "My turn?" He says coyly, as if he was just an innocent boy that was hoping for some hot water. I move out the way and as he brushes by, his chest brushes my nipples sending my body into a deep ache. I wonder if he can feel the shift in my energy, the way his slightest touch turns my body into a red aura of desire. The water flows over his head and down his back causing steam to rise. "where is your soap?" I ask while taking the loofah off the shelf. "In my bag of course" Rob replies. I look out the shower and roll my eyes, of course the bag is all the way by the door. I hop out moving quickly as the cold tempature starts to settle in. I grab the soap and jump back in the shower, "I bet that got them nipples hard" He said with an evil grin. Annoyingly, he wasn't wrong. As the old saying goes, I could cut glass quite easily. Before I could respond, His thick muscular arms begin to wrap around me. "You may hate me but you know you love my warmth" he said with a full smile. Again, he wasnt wrong. I will never understand the pull that this man has on me. The way that my entire being gives to his every whim. Two souls destined to destroy each other over and over for the rest of eternity. As Robs heat soaked into my body, I was quicky reminded of one of his best qualities. Feeling him grow to full length, I cant help but utter a moan. "yea, I cant help it, you have that effect on me" Rob said with a tone of yearning. Feeling brave I reach down and take his head with my hand and give the gentalist of pulsing squeezes. "Guess I havent lost my touch then huh?" I say ready to find out exactly waht he has in mind for this shower. He slowly places one hand on each side of my face. He kisses me first on the forhead and then on the nose. "Babycakes, I know your still mad about the other day and i dont want sex to be used as a way to ignore how we both feel." Rob was always trying to think ahead. I did have a habit of regretting my decisions and leaving them on his plate as if they were his. It wasn't intentional. It did happen more frequently than I would care to admit. "Do you want to feel the back of my throat or not?? I ask as i slowly begin to kneel, locking eyes with his. He smiles that wonderful sexy grin and coos "Ill never say no to my dick in your mouth Christina and you know that" I did know that. The fact is that when it came to sex, Rob and I always got that right. Location didnt matter. Weather didnt matter. If we were alone didnt matter. Rob would deliver in any form of currency that I desired. It made my addiction to him that much more tempting. Have you ever had a man desire you so much he would risk his freedom? His sanity? Just to get a taste.

Rob wasnt like other men. Too many years in different prisons. Too much damage and trauma to ever be able to trust anyone again. He tried to make friends, to bring people into his life. He was a simple man, break his trust once in any way and he was done with you. It wasnt easy loving a man that didnt believe in second chances at all. You hear the stories of men that went to prison when all they needed was someone to care. He was a product of a broken system. One that just wanted to lock him up and throw away the key. Until of course, he met me. I was his moon, his earth and everything in between. He knows what he gets with me which makes him feel safe. Im also his greatest weakness. I am the thing that his mind refuses to let go of when he should be focused. I am the air he needs to keep going. I am his obsession, his replacement for drugs and crime. His greatest need and deepest desire and yet he couldnt stand me. I was everything he wanted to be and couldnt. His past meant that he would never truly believe that i loved him or that he is worthy of my love. We were a tradegedy at best. A wicked love story of sex and emotion. A ballad with highs and lows, always changings its pitch to keep up with the crescendo. Sounds crazy and dramatic huh....it was.

More stories from Ambrosia Vibes and writers in Filthy and other communities.