by Mel E. Furnish 6 months ago in Series · updated 4 months ago 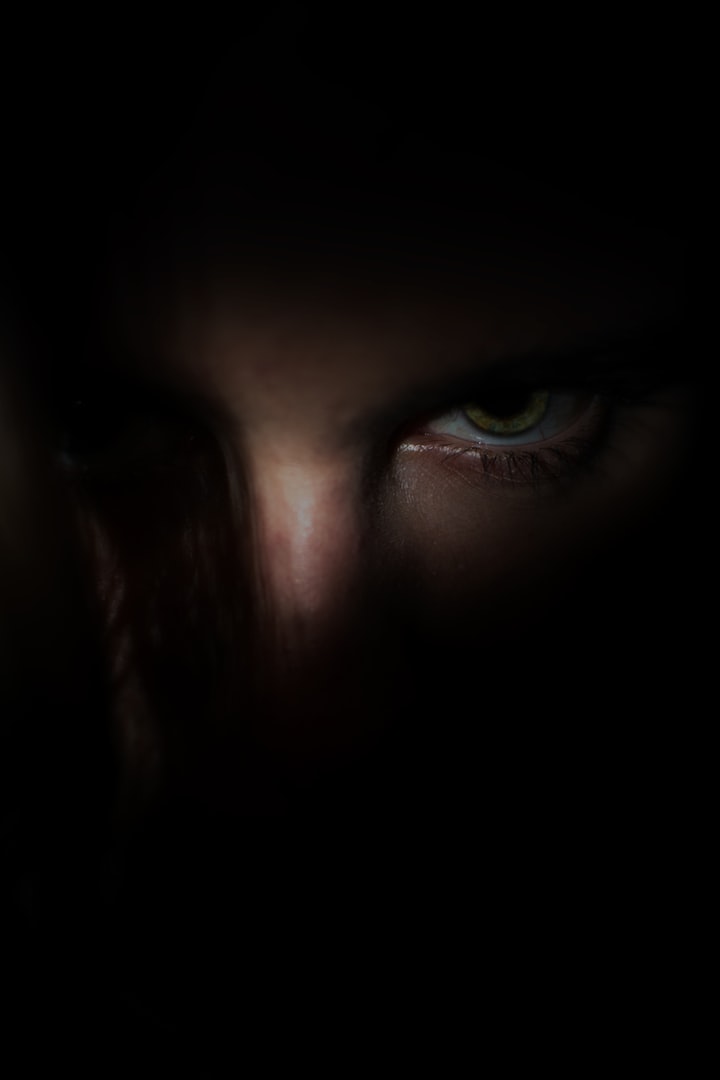 Photo by Peter Forster on Unsplash

* This short story mini-series features a crossover with another mini-series, Suam Novam Vitam. Based shortly after The Sacrifice of a Guardian Angel, this follows Cythia's life; from the present, glimpses of her past, to glances of what the future holds.

> Previous < (The Sacrifice of a Guardian Angel)

Soot and the reek of dark blood hung heavily in the musty, toxic environment. Cythia gasped for air as she struggled to breathe. Her lungs scorched as she slowly wiped some blood from her lip. Dark wings towered over her crippled body as she shrunk into the stone-cold corner.

"Do you not remember my name from before?" His dark eyes abruptly seeped a strange smoke as his hands balled into fists. "You warned my father not to come for me. You manipulated him to betray our cause and neglect his children. We needed him, and you convinced him to abandon us and raise the enemy's child!"

Cythia slowly turned to look at him, her expression twisted in confusion. "No, you can't be," she breathed as she shook her head.

Archyvis laughed as he glared at her. "The horror on your face tells me you just finally pieced together who I am." He grinned darkly.

"Trinth knew and witnessed with his own eyes the atrocities you committed... he was aware of your sick choices," Cythia retorted sharply.

"The actions my sister and I both were forced to commit in order to survive; I have no shame for what I did to endure-"

"What you did then to get you to where you are now? That's cute," Cythia chuckled. "Look, I've seen what they do to children. I know they messed you both up badly. I also did horrible things to survive. However, both of us are here for different motivations. I risked my life for revenge and was killed in combat. You were brainwashed to believe what they considered "ideals" but not consider how others perceived them. They tried to do the same to me, and I got out... I know many are not so... lucky..." she trailed off into a low grumble.

"Silence!" he snapped as an abrupt surge of agony ripped through her. Cythia recoiled as his eyes remained locked on her, his dark powers radiating a painful, searing sensation as it cut through her skin like a knife. Blood trickled from random segments of her body as she trembled. Spontaneous tears in her already rotting and grotesque flesh appeared as fresh dark blood dripped to the ground.

"We knew what they were doing to you. They pushed your sister to murder her own mother brutally! It was too late-!"

"Be silent!" he growled as another wave erupted, another series of lesions forming throughout her beaten body. Cythia unleashed an ear-splitting scream as her blood burned from the agony. Cythia closed her eyes and found herself walking into a memory in an attempt to escape the torment.

The sunset glistened brilliant orange and red colors throughout the sky, the beauty reflected off the churning water's surface by the lake's southern shore. Rymia Forest buzzed with life as the choir of nature unleashed its song. The noises echoed around a young couple standing together with a man holding a small book in his wrinkled hands. He grinned as he dipped his head to the couple. The dunes of the desert to the west stretched out beyond Cythia's long, wavy crimson curls. Her hair draped over her shoulders and chest like a waterfall.

Cythia stepped closer and draped a small woven cloth around the young man’s hand standing before her. "Fitin," she breathed as she gently touched his slick black hair and glanced into his blue eyes. "I vow to love you with all my heart; in this life, and the next, until there is nothing, I am with you." She declared with a bright grin. Her emerald eyes shimmered with excitement as she watched Fitin smile back at her.

Just as he parted his jaws to give his vow and present his cloth over her hand, Cythia was ripped back to the present. Tears of blood streamed down her cheeks as she cried.

Archyvis grasped his spiked whip. Cythia's eyes widened in fear as she braced for the impact. Rapidly, a flash of lightning exploded within the small dungeon. A bomb of electricity erupted in multiple waves. A loud boom followed by a stream of blue and purple lights sent Cythia's head spinning and ears-ringing. A man's outraged roar echoed in Cythia's head as she became unconscious.

"Cythia! Cythia, please! Wake up!" begged a man's smooth voice. Cythia gradually blinked open her green eyes. Her vision remained blurry as she struggled to recover. Her heart pounded against her chest as her mind raced and throbbed with relentless fury. She grumbled as the extreme luminance burned her eyes. Her body ached as she felt blood seeping from her wounds.

Suddenly her heart soared when her sight cleared and her gaze locked on her husband, Fitin. Cythia's lips curled in a weak smile as she struggled to lean toward him. She rested on a fluffy, vast purple bed. Her eyes scanned her surroundings to locate her son, Cytin, resting on a smaller bed nearby. Abruptly she lurched forward to reach out for him, forgetting about her injuries. As she crumbled to the side, Fitin quickly helped ease her back against pillows.

"You need to rest; he will be awake soon. He was up for a while earlier, waiting for you," Fitin grinned. Cythia smiled as she closed her eyes.

"It's good to see you... I don't know where to begin," Cythia grumbled. Fitin shook his head as he gently stroked her hair and kissed her forehead.

"Take it easy, my love. Everything is going to be okay now," Fitin assured.

Cythia promptly froze. Her eyes flashed open as blood roared in her ears. "Where are we? How is this possible?"

Fitin frowned as he hesitated to explain.

Suddenly a newcomer stepped in the doorway and strolled to Cythia's bedside. Approaching her was a goddess wearing a long purple dress with blue bolts sparking with every move she took. The elegant fabric sparkled in the light as her long silver hair streamed over her shoulders. The dress's shoulder braces had a strip of pulsing plasma bolts connecting them to her armor chest plate. Her thighs slipped through the slits in the skirt and revealed her strange veins as they glowed blue and purple. Her cat-like pupils expanded as she smirked at Cythia.

"Flare," Cythia gasped. Her emerald eyes shook with fear as she stared at Fitin. "What did you agree to?" she demanded.

Flare chuckled as she rested a hand on her hip.

"Greetings to you as well," Flare shrugged as she frowned. "I'm only helping your little family; no need to be hostile."

Cythia narrowed her green glare as blood seeped from her forehead. "What did you do to get me here?" she pressed.

Flare turned as she snapped her fingers. "You'll know when the time comes. Before you deteriorate, you must be taken to Vitality to be converted."

Cythia opened her mouth to protest before she was suddenly lifted up off the bed. Her eyes darted around as she was carried out and floated behind Flare in a cloud of electricity. Flare clasped her hands behind her back as she led the way down peculiar corridors. Cythia glimpsed around as she realized they were inside one of Flare's hidden domains. A long stretch of glass revealed many levels of rooms under a large dome-ceiling to her right. To her left, the long hall had several doors with unique symbols carved into the frames.

"Did you require Fitin to swear an oath to you to get me?" Cythia calmly questioned.

Flare didn't turn to face Cythia, only continued walking. "You were running out of time. I simply presented an offer that was ideal for you and your family. If I grant your son a bright future, I need you and your husband to cooperate with me. He has great potential; he needs guidance to prepare him for what is coming."

"What did you offer to Demise to get me converted?" Cythia asked curiously. "Surely, if Vitality is involved in this deal, it wasn't anything that could damage our chances of protecting Trindavin from Demise, right?"

Flare chuckled. "Demise unleashing Hell on Trindavin within the next few years is inevitable; he will want more. So, I am preparing your son for a war that will determine what happens to the world."

Cythia's body shook with fear as scenarios played through her mind. "Well, if we help Eva and Torrick, we can all stand a better--"

Cythia's words abruptly were cut short by the air taken from her as her jaw dropped. Beyond an open door revealed a strange room glowing with powerful surges of electricity. Massive glass containers withheld weird beings, some human. Her heart stopped when she caught sight of a group in the center, all similar in appearance. Her blood ran cold as her eyes traced their short white hair and light tan skin. They were small children, each about two years old. Their veins glowed with brilliant blue hues to a rhythmic beat that pulsed with the bolts of plasma encompassing the containers.

Flare turned with her glare ignited in intense blue flames, veins glowing, hand rising as she pointed a finger toward Cythia. Before Cythia could demand answers from the sight she remained entranced by, she was zapped with Flare's electrical energy. A bright luminance surrounded Cythia within a heartbeat, soon followed by her consciousness slipping away.

> Prior < (The Sacrifice of a Guardian Angel)

~ Part One, The Prophecy

The Prophecy of Elements (coming soon)