Do Not Eat This Book

by JD Clair 8 months ago in satire

Warning for the cognitively challenged 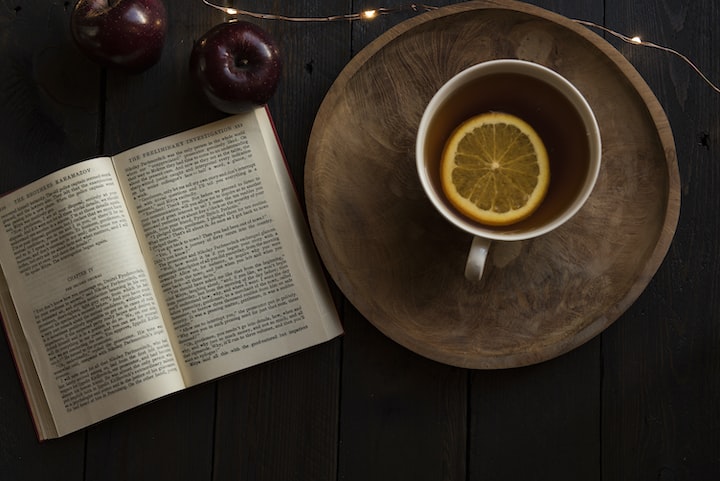 Please forgive my forwardness. It has been a long and difficult recovery, one in which I almost did not endure. My bones are weak. My muscles tight from atrophy. Every nerve ending surging with endless sparks of painful energy. And I have no one to blame but myself. Except, maybe Aubrey.

It was supposed to be a first date. We met online, as you do nowadays, and began talking about our interests. I like toys. Not the manliest of hobbies, but it was something I was crazy about. Action figures, models, weapons, and anything else crafted in plastic or resin. The best ones were old. They had a smell to them. Reminded me of when I was a kid and would use the toys as a pacifier. Sure, it was a bit silly for a 28 year old to keep a Boba Fett toy in his pocket all the time just to sneak a suck or two every once in a while, but the point is I like toys. Aubrey not so much.

Aubrey liked books of all kinds. Horror. Romance. Adventure. She was into anything and everything as long as it was in print. She had to have a book in her hand at all times. So when we matched on VintageOnly.com I thought our combined hoarding interests would amalgamate into one beautiful mold of plastic and paper. Silly... I know. But I'm romantic like that.

So we met at a coffee shop nearby. Well, nearby her. It was about 40 miles from my auntie Cate's house. Oh, yeah, I live with my auntie Cate. But that's not important. Anyway, we met at this coffee shop. It was a little nook off the art district of her college campus and of course, she showed up with a bag full of books she picked up while waiting for me. I was a little late too because it was so far away. The whole drive over I couldn't escape the endless signs for each fast food exit. By the time I arrived I was starving. We sat down and sipped our little cups while she went on about how excited she was. Apparently, while she was waiting for me she found a super rare pre-published copy of Charlie and the Chocolate Factory. before the Oompa Loompas were Oompa Loompas or something. She went on and on about it saying that it was the only surviving copy where Charlie Bucket was black. I don't know.

I couldn't focus on the details because I was starving. And the more she talked about little Charlie and his Chocolate, the more my mouth watered at the dry cloth covered little black book she waved around so emphatically. It was a big, thick, chocolate bar waiting for a big bite. Before I knew it, I couldn't even reply back. Soft grunts of "Uh huh" and "yeah" were the only noises I could utter through my watering mouth. I could smell that old chalky fragrance of the old book; the same smell my old toys used to have. I needed to taste it. I sat there, nodding along, waiting for my moment.

"And so, really Charlie was supposed to black all along but the publishers thought the readers wouldn't like it" she noted

"Mhm" my clenched lips echoed the rubles of my tummy.

"Oh my goodness. It's been 2 hours and here I am talking your ear off. Excuse me for a moment while I use the restroom."

Here was my chance. She hardly rounded the corner before I was teeth deep into the corner of the book. It didn't taste like chocolate, nor did I want it to. Robust flavors of dust infused cotton, liquified into a thick syrup. I felt as though my whole life was leading to this moment. Flashbacks of my childhood, sucking on the corners of my grandma's smoky couch cushions flooded into my brain with a sudden rush of dopamine. I gnawed. I tore. I swallowed bit by bit, bite by bite, chunks of the corners as though it were a sandwich cut into squares. It was there for me. Only me. Aubrey had her moment with it, but now it was mine.

I was certain I wouldn't be able to finish the entire thing but hurried to have as much of it as I could. Large chunks would stab my burning throat and I'd squeeze it down. I had to power through.

She was only gone for a few minutes, but by the time she returned all that remained was a bite of the bottom spine. Quickly, I shoved the whole piece in my mouth. The spine was the tastiest part. The glue gelled like fatty meat along the bone of a ribeye steak.

"Sorry about that" Aubrey was quick to sit back down into the conversation.

"Ift ohkay" I mumbled with the book fragments hidden behind my teeth.

I shrugged. Dare I bring up the book? How long before she noticed it was missing? These were questions that darted in my mind as I swallowed the last bite. Not a moment too soon.

"The one I was showing you. The Charlie one. It was right here."

"I think you took it into the bathroom with you."

"Ew. No. I remember leaving it on the table." She rummaged through her bag frantically before looking at me. I mean, really looking at me. You know the look. The stare of death your mother gives you when you eat her towels.

"I really have no idea."

"You took it," she accused me.

"How dare you" I shot back. "I wont be called a criminal. I'm leaving." I stood and made my way towards the door.

"Not with my book." She stood up fast, knocking her chair to the ground. With one hand she took hold of my collar and with the other she grabbed the table. She began to smash my face into the hardwood over and over. Could you believe her? The incivility of it all. I would have fought back but she caught me by surprise. Anyway, as I lay on the ground bleeding from my eyes and nose, she rummaged through my coat and pockets. She patted me down, finding nothing but the shame of her misplaced blame. The entire café was watching now.

"That's absurd. Who would eat a book?" Fortunately the blood hid the humiliation on my face.

"Well, I want a police officer. You just assaulted me."

The police were called, of course. She admitted to hitting and accusing me of stealing. After the police searched my body and possessions I was declared innocent. Vindicated from the absurdity of stealing. I'm no thief. I turned my nose up at her and left.

Soon after there was a rumbling. A terrible tremble within my literature rich stomach. The black book was burning my tummy. I collapsed right there on the street in front of the police and Aubrey. A sweep of red lights and sirens approached and then I was out.

When I awoke, I was here... in the hospital. They couldn't say if it was the concussion from Aubrey's aggressive head trauma or the 60 year old lead inked book that put me in a coma for 3 months, but my auntie Cate was there. Apparently, I missed a huge legal dispute between my auntie and Aubrey's family. There was some nonsense with the insurance and other boring details but supposedly they settled out of court. The deal was that they pay for all the major surgeries and hospital costs, in addition to a lump sum of $20,000 for pain and suffering.

Suffering... HA! For the last few months I had no pain or suffering. I was in black Charlie's Chocolate Factory eating anything and everything just like all those other wonderful children. Sure, I can't walk yet, and I need to pee out of a tube but I know the first place I'm going to go with my $20,000 when I get out of here; The nearest book store.

Receive stories by JD Clair in your feed
JD Clair
Read next: Delicious Gluten-Free Foods You Can Buy Online