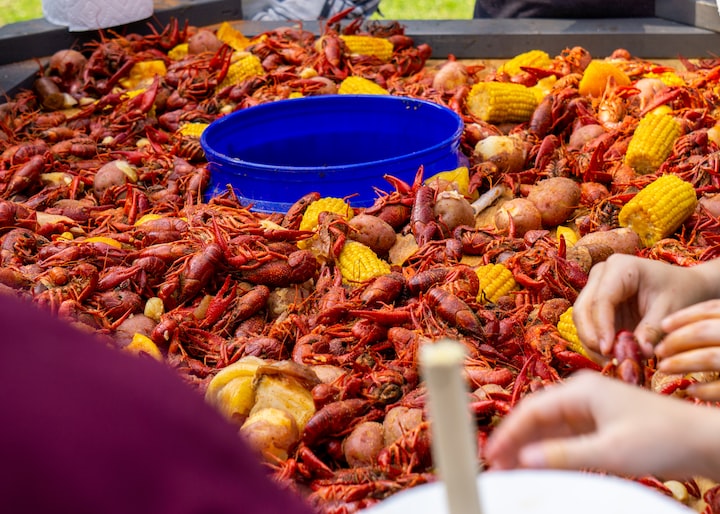 Photo by Logan Ellzey on Unsplash

Those who know, kneaux. For the rest of my readers, strap your taste buds in for the ride of their lives. Here we geaux.

I may not have travelled the world, but I've been around the eastern United States, from Pennsylvania to Georgia to Florida, and Texas, and all the places in-between. I've had crawfish from Tennessee, Alabama, Mississippi, and even Colorado, and there's only one place that knows how to cook them up right. Who Dat? You might ask. Well, I'll tell you. It's a place where the air is as thick as a blanket, and the winters are as hot as the summers. Some call it The Boot because of the distinct shape of its borders. It's the state where the Mississippi River meets the Gulf of Mexico, and where their French heritage is celebrated throughout all the Parishes. They may not get everything right, but it's the only place in the world to get genuine Cajun cuisine, Louisiana.

Humid is a word many people know, but to truly know what humid is, you have to stand outside on a hot Louisiana summer after a nice warm rainfall, trying to guess if the water on your skin is sweat or condensation. And if you feel you still aren't sweating enough, grab yourself an 80 quart stock pot, a jet style propane burner, and a bag of live crawfish. Gather your family around a table placed outside, throw a tarp over it, and get yourself ready for a real spicy treat. The only way to beat the heat is to become the heat, and since you are what you eat, you gotta eat the heat.

The crawfish boil has been such a staple of Louisiana tradition that they adopted the creature as their official state crustacean (some joke that the state bird is really the mosquito). Boiling crawfish is a family affair, so make sure to invite and bring everyone from great-grandmas to your step-uncle's third cousin. You can never have too many people (as long as you bring enough crawfish, of course). The recipes at a crawfish boil can vary as wildly as the personalities of the people cooking. There's as many ways to cook them as there are crawfish in a bag. And there's really only one wrong way to cook them, and that's to not use Zatarain's Crab Boil. That's the good stuff y'all, and a crawfish boil without Zatarain's is like a BBQ without beef. It can be done, but it shouldn't be.

The best part of cooking up some good crawfish is that once you have the crawfish and the Zatarain's, the other ingredients are all up to you. Traditional favorites are small red potatoes, small white onions, whole garlic cloves, mushrooms, lemons, and ears of corn. Some people like to leave the vegetables in their mesh bags when boiling, some people like to substitute ears of corn with a can, punch a couple holes in it, remove the label, and toss the whole can into the mix. There really is no wrong way to boil crawfish (well, there is one, but we've been over that). Once you know what you're doing, it's as easy as 1-2-3.

This is the recipe pulled straight from the horse's mouth.

Fill an 80-quart crawfish boiling pot with a basket 1/3 to 1/2 with water. Place pot on a jet-style propane burner on high heat. Add onions, garlic and lemon halves. (You can use a small laundry bag for lemons and garlic. Or just leave the onions in the mesh bag they come in from the grocery with tags removed.)

Bring to full rolling boil. Stir in Crab Boil Complete. Add potatoes (in their mesh bag from the grocery or a laundry bag). Reduce heat to medium-low. Boil 20 minutes or until potatoes are fork-tender. Remove potatoes.

(make sure to remove any dead ones before boiling)

The cooking part is easy, it's the eating where beginners may struggle, but once you get the hang of it, you'll be tearing through pound after pound in no time. They might look like tiny lobsters, but they are far from fine dining. Eating crawfish is a messy affair, so bring plenty of paper towels, and roll your sleeves up, because the juices will be dripping down to your elbows (if you're doing it right).

Now, we've established that to do this properly, you'll need a big enough table placed outside and covered with a tarp. Once the food is cooked, you just dump it all on the table. You don't need plates or silverware, you just need plenty of napkins, plenty of drinks, and buckets or bags to dispose of the shells.

Step one to eating crawfish is to pull the tail from the head. That seems obvious to most. Now, the uninitiated will likely try to peel the tail away in pieces to get to the succulent meat. While this does work, you'll never be able to keep up with the more experienced consumers of this delightful delicacy. The masters of crawfish consumption know that once the tail has been removed from the head, you simply pinch the bottom of the tail, and pull the meat out in one motion with your teeth. With practice, this becomes second nature to the crawfish lover. For an extra burst of flavor, the juices can be sucked from the head (not for everyone, but always worth a try. Personally, I love it), and the big claws can be broken open for meat. If you're lucky, you can pull on the hinged pincer and have all the meat come out with it, yum. The small claws are hardly worth the effort, but hey, waste not want not, as they say.

The remains should be discarded and, once all the eating is done, placed in a tightly sealed bag and dumped in your trash can outside. Trust me, you do not want those shells sitting in your kitchen trash can. The leftovers can be saved in Ziploc bags in the fridge. The tarp can be rinsed off, and the table can be moved back to wherever it came from. You know you're done eating when your belly is full, your sinuses are clear, and your mouth has grown fond of the furnace of flavors burning within.

Typical conversations around a crawfish boil include phrases like,

"This is some good crawfish."

"Have you tried the corn yet?"

"These potatoes are bangin'!"

"The mushrooms just soaked up the flavors so well."

Once the consuming is complete, take some time to enjoy the company of your family, or just take a nap, since you'll likely be more stuffed than a turkey at Thanksgiving. The best part of every crawfish boil is being able to share it with your loved ones. So, go grab your ingredients, gather your friends and family, and gorge yourselves on some Cajun cuisine!