My Road Through 2 Chronic Illnesses

KH
by Kimberly Hildreth 3 days ago in humanity 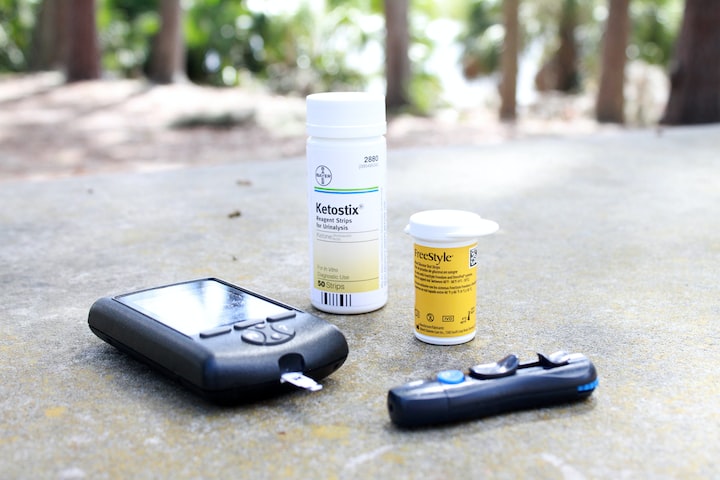 Photo by Mykenzie Johnson on Unsplash

My life has always been a bit different. At 8 I was diagnosed with type 1 Diabetes, although my only question to the doctor at the hospital was "Will I ever get to eat oreos again". Wish 8 year old me knew was how life changing this disease would be if I took it seriously from the beginning. Through my teens years I would take my insulin pump out while hanging with friends to feel more normal, more like them. With no care in the world of how those silly decisions may affect me so many years later. I thumbed my nose up at my Doctors who told me "You need to take this seriously" or "This could affect you later on". At 15 years old I started cutting myself, not knowing the deep down reason was I was tired of being different, of being the girl with diabetes, of being the girl that couldn't take part in any fun festivities because my diet wouldn't allow it. At 17 years old I was admitted to the hospital with a bloodsugar of 17 after leaving my insulin pump on while being sick and not eating. My doctor made the decision to remove me from my pump as I was not mature and responsible enough to have one. She put my on a long acting insulin which would cause me to have ketoacidosis 6 months later. After another 5 day stay in the hospital I was just over it. Over the diabetes, over the restrictions, over the shots, over the lectures. I just didn't want to care about any of it anymore. It was all so overwhelming. I luckily had great insurance until 21 when I decided to move across the country. I went 6 years without insurance so without the correct insulin, without a doctor to oversee my care, without enough supplies. I would buy the cheapest bottle of insulin I could get without a prescription ($74 bottle or NPH). This insulin was not what I needed and really had no idea where my bloodsugar was at at any given time. When I was 28 I got pregnant with my daughter. Immediately I was sent to the high risk doctor. The high risk doctor was quick to put me on an insulin pump, quick to get me on a continuous glucose monitor and even quicker to require me to send in my bloodsugar results everyday or risk losing her as my doctor. Under her I was able to get my bloodsugar to levels I have NEVER been at before. My last a1c test right after I gave birth was a 6.1, a prediabetic level. After having my daughter and wanting a healthier and longer life I tried to keep my bloodsugar under control but little did I know the damage from my teenage years had already been done. Fast forward 2 years. I go to the doctor with some shoulder pain. After 1 year it is detemined that my shoulder pain is from scar tissue that has stayed in my shoulder due to the diabetes. 3 weeks after the surgery I am hospitalized and diagnosed with MS. My know it all attitude about my diabetes changed immediately to feeling lost and confused. MS is scary but I can handle the diabetes. I was set up with a neurologist who would quickly put me in my place. I went to see him because I was having some eye issues, my vision was tinted red and I had the most annoying floaters. Absolutely convinced this was due to my new illness I went right in and he broke my heart telling me that this was not due to MS but a complication of years of diabetes. After a rush to the doctor I was scheduled for eye surgery. Now 30 years olf and have been through a c-section, shoulder surgery and double eye surgery. All 3 caused from the diabetes (not that I may not have needed a c-section if I was completely healthy but it was determined early on in my pregnancy that I run the risk of a heavier baby and c-section was the safest delivery method).

I have struggled now over the past 3 years to really understand the MS and figure out how to deal with the diabetes. Unfortunately the only real medication to deal with a MS relapse is steriods which causes extremely high bloodsugar and weight gain. So tying to navigate all of this while keeping the sanity and keeping myself as healthy as I possibly can because at the end of the day there is now a 5 year old watching, and now asking questions and I want to be the best mom I can for her.