by Rachel M.J 9 months ago in love · updated 7 months ago

and a dash of wine 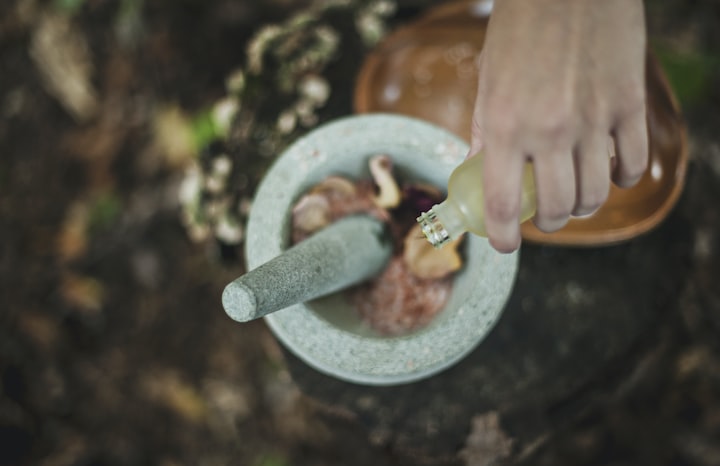 The Witch had heard rumours of a University just past the grove. Apparently it's were topography liked to roam, but she was more intrigued by the limestone walls, which were said to stretch high enough to draw a silhouette against the moon. It was a fair cry from her quaint barn in the thicket, which she very much wished to leave. She had all the company she needed in the form of a stray cat that liked to let itself inside without invitation. But, on a particularly lonesome morning she found a gentle tug of curious yearning pulling at her like a string in the belly. She had let the string guide her, and when she coiled up that loose thread it lead her directly to were the grove met the city.

Moments later she was slinking through the city's stony streets, eyes darting from one thing to the next. A dirty building with broken glass windows, stairs leading underneath a dusty book shop, and a bustling of people sweeping through alleyways. They omitted the pungent aroma of impatience. The Witch pinched her nose. She rounded a corner, and almost collided with a tall man in a grey suit. She sucked in a breath and withdrew behind a wall. Peaking a beady yellow eye, she watched him as he looked over his shoulder and frowned.

"Mental" he said, into his phone, "Anyway", he shook his head. "I'll be at the University tomorrow... yes, a presentation on invasive toad's and green tree-..." His voice wafted down the street.

Invasive toads, and green tree-frogs, she thought to herself. The phrase mulled over in her mind. She'd never known a toad to be invasive before. Sure, she'd shoed one away from her windowsill once or twice, but they'd never overstayed their welcome. She'd thought she'd better attend this presentation, and let the man know.

When the Witch arrived at the University she was pleased to find that the grass did indeed smell of fresh clippings. She bent to the ground and sifted the blades into a glass vial she'd she'd kept in her coat. A young man passed by and watched her with curiosity. He wore a black tie around his neck and the Witch felt very pleased that she'd had the forethought to pluck a tie from a mannequin yesterday when no one had been looking. "He won't be needing it anyway" she'd cackled.

She wandered the grounds until she came across the smell of sandalwood and nervous anticipation wafting from a quaint café. Inside was the man she'd heared at the city. Once finished his drink, he unwittingly lead the way to a large conference room. It was absurdly bright compared to her barn, so she procured a black parasol from her cloak and stood watching as people congregated by a table laden with food. She plucked a tiny sandwich's from the table, and was met with a grin from the woman next to her.

"They're good" she said, piling four onto a plate.

"Here, take mine" insisted the woman, meeting her gaze with soft-green eyes. The Witch eyed the sandwiches suspiciously, but nodded her appreciation.

The crowd took their seats as the presentation began. The Witch listened intently, until she was lulled to sleep at the incantation of "The Rhinella marina is thought to originate from La Venta fauna". Her head drooped to her chest.

She awoke perhaps an hour later to the sound of chairs scrapping across wooden floors.

"Now, if anyone would like to stay for conversations and wine, we'll move the party to the back" said the man in the grey suit. The guests congregated to the back of the room, and a woman with a severe face approached her,

"Glass of wine?" She asked.

The Witch had never heard of wine before, but the burgundy liquid lapsing around the glass fascinated her. She watched as others sipped their wine delicately. She touched the glass to her lips. The sweet taste of cherry filled her mouth, and she took another sip in appreciation. This time vanilla. She sipped again. Cacao. A giddy laugh rippled from the Witch's throat. She ignored the stupefied glances thrown her way, and gulped the rest of the wine in one go.

"Do you like the wine?" The woman who had offered her sandwiches was standing beside her.

"Why yes" replied the Witch, brandishing the empty glass. The woman giggled.

"It's better with food", she suggested, passing her another plate of sandwiches.

"Delicious!" She said to the woman, closing her eyes in pleasure.

"I'm glad you like it". The woman opened her mouth to say more, but was whisked away by another student.

The Witch licked her fingers, and sat with the comfortable feeling of a full belly. As she meandered out of the room, she grabbed the arm of a happily chatting man, "Where can I get more of this?" She demanded, pointing to his glass of wine.

"Umm... at the liqueur store" he stuttered. When she looked back at him blankly he gave her a list of directions.

"Excellent" she said, turning vacantly away.

And a Dash of Wine

The grocery bag that had carried the Merlot looked absurd in the Witch’s living room, so she stuffed it up the chimney to hide it as best she could. “Remember to remind me next time I light the fireplace” she told the cat standing in her doorway.

“Meow” it said, staring back at her with yellow eyes.

“Very good” she muttered, pushing back clutter on her dining table to make space for the bottle of wine. She eyed it, as if not quite knowing what to make of it. The cat, who had let itself inside, leapt onto the chair beside her and eyed it as well.

“Not so sure about it now” she said, glancing sideward. The cat glanced back as if to say, “you’re asking me?”.

“No no, you’re quite right” the Witch said, “what’s a cat to know about Merlot… not much I’d presume”. She cleared away more clutter, carrying glass bottles and heaped sprigs of thyme away to the kitchen, as though to make more room for her bubbling thoughts to spill onto the dining room table.

An hour or so had past and the bottle of Merlot sat condensating where the Witch had left it. The Witch sat as well, opposite, and condensating from her brow, as she grew more and more infuriated at her tin-can empty mind.

Impatient for inspiration, she pulled out a number of ingredients at random and began crafting various brews. She added her vial of grass clippings to one of them, and when she tasted it she spat it back out, "Pah!". The black cat hissed at her,

"Oh, go on back home then if you don't like it!" She yelled back.

The cat ignored her and sat with it's back turned as she continued to work through the night. She noticed it peak over it's shoulder when she'd made a brew that smelt of sweet coconut cream, but it played at disinterest when she'd tried to catch it's eye. "Oh, come on you silly git", she said, bringing a spoon over. The cat pretended not to notice her, but reached it's tongue to lap up the sweet cream. It drank it in one go, and within the hour was happily lolling on it's back and batting at moths as they tumbled by.

The Witch had drunk a concoction of her own; vanilla, honey, crushed nettles and a dash of Merlot. She sat with the cat now languid on her lap, and laughed as it blinked it's tired eyes. "Not bad for my first time using it" she mused. The cat purred it's agreement. They fell asleep like that, the Witch's head resting against the wooden chair, and the cat nestled like a croissant in her cloak.

The Witch came in and out of sleep as pale sunlight let itself through the open windows. She lifted a hand to block it from view, but fell straight back to sleep, her hand falling into her lap. The cat no longer laid there, but sat on the front porch, licking it's paws. The Witch thought she heard a voice, or maybe she dreamed it.

"So this is where you've been running off to".

The Witch lifted her groggy head. A splitting pain shot through her skull. She let her head sag back to her chest, but in the brief moment she'd looked up, she thought she saw the figure of a woman standing in her doorway.

"Oh", she heard the figure say, followed by a giggle. .

Morning songs turned quiet as early afternoon approached, and the Witch realised that sipping so many concoctions the night before had not been a good idea. She pulled herself off the ground, and nursed her aching head.

"You're up" came a voice from behind her. The Witch jumped. Standing in her doorway was a young woman. It was the woman from the university, the one who had offered her the sandwiches. Nestled in her arms was the black cat, and in her hand, a store bought coffee.

"Oh, I'm sorry for intruding... I came by this morning looking for Smittens. I'll go..." The woman turned.

"Don't go!" The Witch called back, stumbling over the dining chair. The woman turned back, just in time to see her catch it. The Witch laughed, "Come in!" she said, pulling the chair out in invitation.

"Are you sure?" Asked the woman.

The Witch gestured to the cat in her arms. "Your cat's already made itself at home". The woman blushed in response.

"Smittens!" she chastised, bonking it on the nose. The cat leapt out of her arms and sauntered into the dining room. "I apologise for her audacity" she said, following the cat inside. On the dining room table, and strewn across the floor, the woman noticed pots, pans, and ceramic bowls filled with different coloured liquids.

"Amazing" she gasped. "I knew there was something different about you. You know, when you popped an umbrella open inside". The comment drifted over the Witch's head unnoticed, like steam from the coffee out an open window. "Are all of these..." she saw the empty bottle of wine. "Are all of these made from Merlot?" She asked.

"Just a dash" the Witch said, a twinkle in her eye. "I'd offer you some but... it seems I left them to spoil over-night". She surveyed the mess she'd caused, and grimaced inwardly.

"That's okay" the woman replied. "I actually came by to offer you a drink".

The woman pushed toward her the steaming cup of coffee. "Have you tried a latte before?" The woman asked.

"It's steamed milk brewed with coffee" she explained. The Witch's nose crinkled in disgust, but the woman quickly interjected "It's great for hangovers". The Witch blushed, and turned her head to hide the pink in her cheeks.

"It's okay!" The woman laughed, "I don't know what you did, but I think Smittens has a hangover, too".

The Witch cackled, "oh yes, he was quite the little drinker" she said. "I can show you how to make it if you like, his favourite drink".

There was a lull in the conversation, so the Witch took the coffee in her bony hands. She breathed it in and allowed herself a very small sip. Her eyes widened.

"This is amazing!" She said. "I wonder what would happen if we combined it with the Merlot".

The woman looked up at her, mortified.

"I'm only joking," she said, quickly. The woman let out an appreciative laugh. The Witch smiled, satisfied, and began concocting her next recipe in her mind. She'll like it, she thought, taking another sip of hot coffee.