In a moment, the sea changes 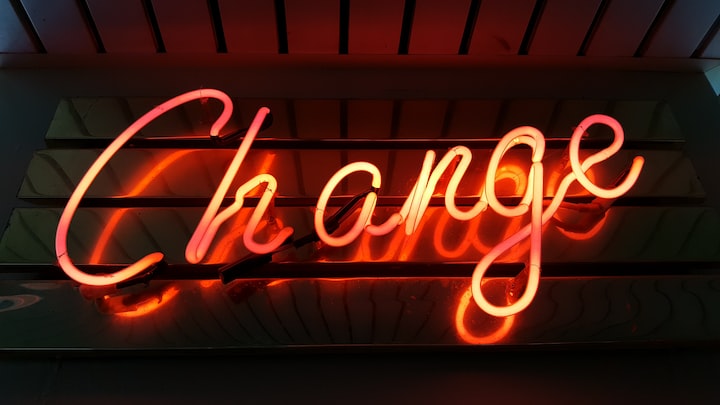 Photo by Ross Findon on Unsplash

In a moment, the sea changes

You have to be your own master. Don't worry about talking more or less than your neighbors.

I remember what one of my brothers said not long ago: remember: you are no longer a sister-in-law

To learn to bear, even if there is a grievance, don't put it all on the surface.

You don't have to show that the world has hurt you. You have to try to change.

Nothing can't go, just like nothing can go back.

The same reason, but sometimes, I always get stuck in the slit and can't get rid of it

Open Life is used to using mean and cruel means to let us know: either survive in change, we should

It fades away in silence.

Since you can't change the environment, change yourself.

This is the philosophy of change, and this is the truth of survival.

I've seen such a sentence on the Internet before: I'm such a person.

Others go the same way to the dark,

Hit the south wall and turn around.

I admire this kind of character, brave and tenacious.

But now, when you think about it carefully, everything is spiritual. Where is all black or white

I like reading very much. I clearly remember reading the stories of Liu Bang and Xiang Yu at the end of the Qin Dynasty.

One is the descendant of nobility and the overlord of Western Chu who can carry the tripod; One is a small gangster in Peixian County, a common people

It turned out that the latter Liu banglian and many excellent generals defeated the former Xiang Yu, which was really amazing

According to the historical records of Xiang Yu, after Xiang Yu was defeated by Liu Bang in the Chu Han war, Xiang Yu led 800 people

Ma broke through the siege and came to the Bank of the Wujiang River.

At this time, the head of the Wujiang Pavilion advised Xiang Yu to cross the river quickly in order to make a comeback and report

Qiu Xue hated, but Xiang Yu said with a smile: When heaven dies, why should I cross! He crossed the river with 8000 children from Jiangdong

West, no one is back now. My father and brother have pity on me in the east of the river. How can I see it! Even if he doesn't speak, he is worthy of his own heart

Oh! So he pulled out his sword and killed himself.

If he chose to return to Jiangdong, or now the overlord of Western Chu has long been a famous emperor;

We don't know what history looks like and whether it should be rewritten.

However, the fact has become a foregone conclusion, and too many regrets have gone with the wind.

And I also clearly understand that everything can't be too rigid and inflexible. If this road is blocked, we should go

Another way, try, there is always a right truth.

If you want to do something, don't show off or publicize it.

Just do it quietly.

Because it's your own business, others don't understand your situation, and it's impossible to help you realize your dream.

Never show off because of vanity.

Don't give up your dream because of a comment from others.

In fact, the best state is to stick to your dreams and try more. Whether it is worth it or not, time is the best proof.

Selected Essays on philosophy of life (8):

The lamp waiting for you to go home.

In midsummer, the scorching sun was burning. He took a car for two hours and hurried to the lighting city of the provincial capital. See your wife

At that moment, he was distressed and wanted to get angry.

His wife was wearing a long pink dress and pale. She held a packing box with a lotus lamp inside.

Seeing him coming, she waved to him weakly, like Hibiscus wilting in the fire.

The wallet was stolen and the car was empty. She said sadly.

On the way back, he couldn't help criticizing her: you're not in good health and don't stay in the hospital! Just for

Buy a desk lamp and come all the way to the provincial capital.

How can I say hello

She hugged the lamp box and said like a baby: this kind of lamp is very unique. We don't have it there.

It's just an ordinary desk lamp! He thought she was making a fuss.

She did not explain, but said: the demolition of the old house has started. It is estimated that we will move to a new house in a year. That's right

When you need a desk lamp.

He was speechless, and his heart suddenly sank to the abyss. The doctor said that she was in an advanced stage of the disease and might not live

He kept it from her for a year.

In order to earn money to see her doctor, he worked very hard.

He often worked late into the night and did some part-time jobs on holidays.

After the night shift every day, he walked home under the faint moonlight. From a distance, he saw the light on his window

The dim yellow light lit up his tired body and mind and brought him warm warmth.

When she opened the door, there was her thin smiling face of joy. She was waiting for him under the lamp. Seeing him back, she went to the kitchen immediately

How many times he cried secretly.

He couldn't live without her and the lamp waiting for him to go home. marry

Before, when she was not ill, she once went back to her mother's house for more than a month. Every night, he ends his night shift,

Dragging his tired body home, he was very lost when he saw that the window was dark. Stepping on the creaking wooden floor

Board upstairs, surrounded by dark, he felt as if he had been forgotten by the world and had no home.

When she came back from her mother's house, he told her his feelings. She giggled and said with some pride: I didn't expect

That lamp is so important to you.

During the day, she was tortured by taking medicine, injections, infusion and various treatments in the hospital. night,

She said the hospital was too noisy and couldn't rest well. She wanted to go home and sleep. He followed her.

At the moment, he often lost sleep at night. Listening to his wife's deep breathing, his tears slipped down quietly. difficult to

Imagine how he should deal with a person's life after his wife left.

Time passed day by day, so fast. A year later, they moved to their new home and she bought the new lamp

My desk lamp is in the bedroom. However, within a month, she left.

Such a blow, for him, is to

Life. He was suddenly silent, almost silent, and went to work, eat and sleep numbly every day.

He came back from the night shift. Such a large group of new buildings, few residents have moved in, and it is dark everywhere.

Far away, he was surprised to find that the light was on at home! A light yellow light shines through the curtain, emitting a gentle light

Awn is like the scene when his wife is in.

He almost ran upstairs, opened the door and shouted her name.

There was nothing to say but what she had bought

The lotus lamp was quietly on, casting a soft light.

He thought in dismay that he had forgotten to turn off the light when he left in the morning.

The next day, when I was on duty, there was a light rain. Holding the broken flower umbrella used by his wife, he slowly

Go home. At the door of the community, in the misty rain, he saw the lights on at home again. He couldn't help but stay there,

Let the rain wet his hair and thoughts.

Absentminded, he walked to the door and opened the door.

He shouted his wife's nickname, but he still didn't respond. only

There is a lonely lotus lamp, shining with silent brilliance.

Something suddenly occurred to him.

When he opened the locker, he found the packing box of the lotus lamp, opened the manual and saw that it was impressively written on it

With: the latest timed energy-saving switch light, light a home light for your lover.

In an instant, he burst into tears.