History of Memorial Day in the U.S.

by Linda Rivenbark 4 months ago in humanity
Report Story

Remembering Those Who Gave Their All 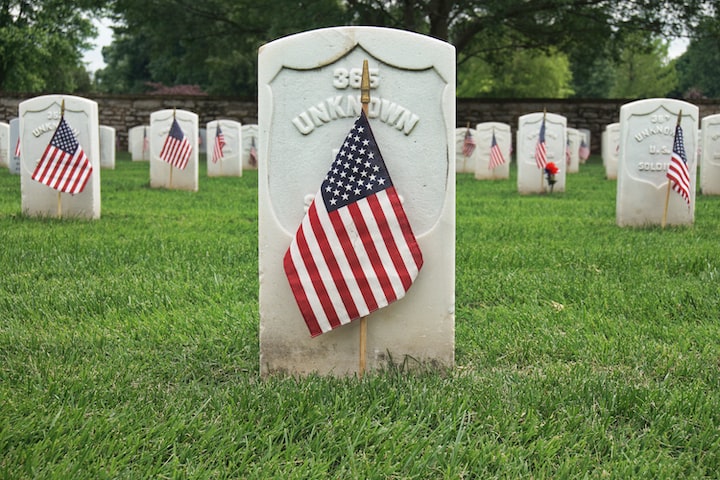 Photo by Robert Linder on Unsplash

Memorial Day is observed on the last Monday in May, leading into a three-day weekend. Sometimes viewed as the unofficial beginning of summer each year, many people plan outdoor events like cook-outs to get together with family and friends.

Stores feature Memorial Day Sales and some people take advantage of the long weekend for the first summer vacation or road trip. But these celebrations are NOT what Memorial Day is really all about.

It would be good for every American, as well as people in other countries, to know when and where Memorial Day began and what it meant at different times in history.

A 1971 Act of Congress declared Memorial Day a National Holiday. But the spirit of the holiday, which was first called Decoration Day, began in the immediate aftermath of the American Civil War in the 1860s.

Statistics show that more than 1.1 million Americans have died in all American wars combined.

The number of casualties suffered in the Civil war alone was 498,332.

Let that sink in. Almost half of all wartime deaths in battle took place when Americans fought Americans.

In the midst of the devastation and heartbreak following the end of the Civil War, many people sought ways to honor the fallen.

MARTYRS OF THE RACE COURSE

According to some historians, the first observance of Memorial Day began in Charleston, South Carolina at a horse racing track that had been used by Confederates as a large open-air prison to detain Union prisoners.

History states that during Sherman’s March to the Sea prior to the fall of Charleston in February 1865, hundreds of Union prisoners had died. They were buried in mass graves.

African-American churches organized a joint project to give each deceased Union soldier a proper burial in an individual grave. They constructed a fence around the graveyard and placed a sign above the gate with the words: “Martyrs of the Race Course”.

A parade took place on May 1, 1865, when approximately 10,000 participants came together to honor the fallen soldiers interred at the Race Course Cemetery. Thousands of school children from the New Freedman’s Bureau Schools marched at the head of the parade carrying flowers and singing patriotic songs.

Following the children in the parade were church leaders, members of women’s organizations, Union troops and recently emancipated slaves.

The soldiers who had been buried were later moved to the Florence or Beaufort National Cemeteries or to Cemeteries in their hometowns.

On April 25, 1866, one of the first Declaration Days, women came together in Columbus, Mississippi to place flowers on the graves of Confederate soldiers who died at the Battle of Shiloh.

Three years after the Civil War ended, the tradition of decorating graves of deceased Civil War soldiers continued on May 5, 1868. On this date, Decoration Day was officially established by a group of Union veterans known as the Grand Army of the Republic.

The first large observance of Memorial Day took place on May 30, 1873, when about 5,000 people joined General Ulysses S. Grant in a ceremony honoring both Union and Confederate soldiers who died in battle.

A highlight of the ceremony was the placing of flowers and small American flags on graves of soldiers and sailors on both sides of the conflict by the orphaned children of these honored dead.

Observances of Decoration day became so prevalent that today, over two dozen cities claim to be the birthplace of Memorial Day in the United States.

Prior to World War I, Memorial Day honored only Civil War casualties.

After 116,516 military members lost their lives in World War I, Memorial Day was changed to an occasion to honor all fallen soldiers of all American wars.

The Vietnam War claimed the lives of 90,220 American service members.

Seven other wars combined brought us to the staggering loss of over 1.1 million American servicemen and women.

MEMORIAL DAY AS WE KNOW IT

According to the National Museum of the U.S. Army, the date we now observe Memorial Day was greatly influenced by Representative John A. Logan, a Union supporter, who was elected to Congress in 1858, having served as an officer in the Mexican War.

Rep. Logan wanted the holiday to take place when flowers were in full bloom throughout the nation so the tradition of placing flowers on military graves would be possible for everyone involved.

In 1888, Congress passed an Act declaring May 30 as the official Memorial Day Observance.

Memorial Day is now observed on the First Monday in May.

The Commission encouraged all Americans to pause for one minute at 3 p.m. each Memorial Day to gratefully remember the sacrifices of the more than one million service members who gave their all to defend the freedoms we hold so dear.

May we honor them by doing our part to protect our precious freedoms.

On Monday, May 30, 2022 and every future Memorial day, let us all observe Memorial Day with a minute of remembrance.

More stories from Linda Rivenbark and writers in Humans and other communities.