In the Locker Room (Dane and Shawn AU)

A locker room kiss leads to a first time fuck; a Dane and Shawn AU 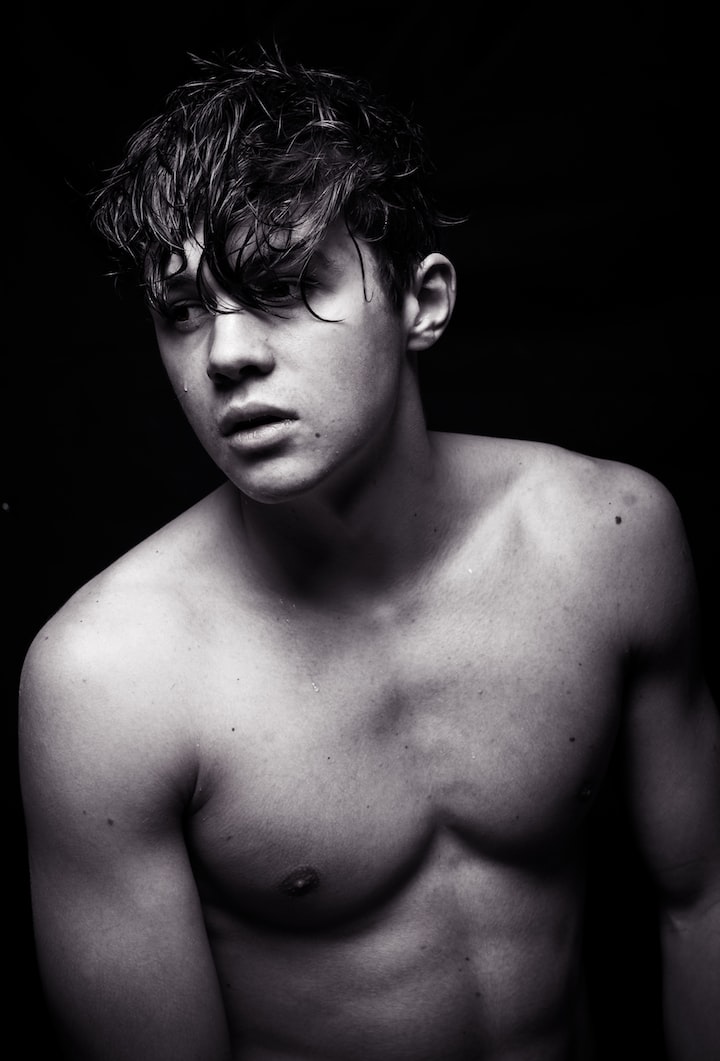 Shawn swallowed hard. He and Dane were in the locker room at school, alone and after hours. He couldn't stop looking at Danes abs, his shirtless chest.. those muscled arms.

But so was Shawn.

Keera had told him he needed to get over his shyness. "Just kiss him already." She had said.

He just.. stepped up to him and they stared at each other for a moment, their bodies wet from their showers. Dane stuttered, his head tilting as he started to ask what Shawn was doing, only for Shawn to close the gap between them and press his lips to Danes.

A second passed, then two seconds, and finally a third before Shawn started to pull away and apologize, only to be caught off guard as Danes hand wrapped behind Shawn's head and pulled him back into a deeper kiss, and then another, until Shawn felt Danes tongue probe at the entrance of his lips and he opened them, allowing their tongues to dance together in a tango that made Shawn's groin stir with a fire that was hotter than any he had felt before.

His dick twitched, quickly coming to life as Dane backed him up against the wall without breaking the kiss. Shawn whimpered, moaning aloud as their kiss finally broke and they both came up for air, panting hard as they searched each other's eyes. Danes hands were on the wall on either side of Shawn's head, possessively.

What the fuck just happened?

Dane growled, then turned and walked away before Shawn had a chance to even register what had happened.

It had been a few days since their kiss. Dane had been avoiding Shawn as much as possible, but Shawn had been the only thing in his dreams.

That kiss was all he could think about.

That kiss and Shawn.

Shawn within his arms.

Shawn in a towel.

Dane growled, even his fantasies lately kept turning to Shawn.

He couldn't take it anymore. He had to go find him.

Had to go find Shawn.

It didn't take long to find him alone, and Shawn looked up as Dane approached. He stuttered out an apology only to be caught off guard again as Dane growled.

"Shut up." He said sharply, hand grasping the back of Shawn's neck and pulling him into a rough kiss. He could feel the burn of his whiskers as their lips mashed together, only to find that he didn't mind the pain.

Shawn moaned, his eyes fluttering closed as he melted into the kiss, putty in Danes inexperienced hands. Dane might not have known what he was doing, but Shawn didn't care. To him it was perfect. Dane broke the kiss, his eyes hungry as he shoved Shawn onto the bed and got on top of him.

Now it was Danes turn to groan, taking in a sharp intake of breath as he let it out with a lusty growl. "Fuck." He said, pressing his hungry mouth to shawns, those tongues caressing each other as Dane pressed his knee into Shawn's crotch. He was rewarded with a moan and he smirked, pressing harder. He could feel just how hard Shawn was getting, and he wondered just how firm he could get him. How much he could take before he begged.

Dane growled, a sound dripping with hunger and lust as he pulled off Shawn's shirt. Shawn was more than happy to accommodate, eagerly helping rid himself of the offending clothing before he whined and pulled at Danes shirt as well. Dane pulled it off, getting tangled and flustered as he stood up.

He hissed as he felt Shawn's hands on his belt, undoing the buckle and and button before pulling the zipper down and yanking the top of his jeans down to mid thigh.

Holy fuck he was hard, his dick throbbing with desire.

Pretty soon, he found himself biting his lip as Shawn pressed his face to the front of Danes boxers. Fuuuuck. Shawn carefully pulled down the fabric, something he had been dreaming about for what felt like ages now. His breathing was heavy, gravity pulling at his lungs as he swallowed hard, tentatively leaning forward and touching his tongue to the tip of Danes cock. A drop of precum glistened there, and it tasted salty.

Shawn wanted more, and his tongue swirled around the tip before his lips closed over the head of Danes hardness. They both moaned, eyes closing at the pleasure they both felt.

God, this was amazing.

Dane moaned louder as Shawn sucked his length into his mouth. He couldn't take all of him, but he made up for it by using his hand.

Shawn pumped his hand and sucked hard, a moan building in his throat before he was pulled off with an audible pop. Dane pushed him back onto the bed, taking his lips hard and hungry. Shawn pushed him off for a second, hand grabbing a condom and some lube from the drawer next to his bed.

"Please…" he said, his eyes begging and pleading for more.

Dane was all too happy to oblige. He tore the wrapper open and rolled on the latex gloves. It was a little tight, and a sudden pang of jealousy hit him as he wondered why Shawn had a condom on hand.

He shook the thought away, pouring some lube onto his fingers before he inserted one into Shawn. The man gasped, mouth forming into an O of surprise and pleasure as his breath was stolen. Dane pumped his finger in and out, stretching Shawn open. He added another finger and Shawn moaned, whining a little as he hissed in pain.

"Shhh.., it's okay, I'll go slow." Dane reassured Shawn, slowly pumping his hand. He turned his fingers towards himself and wiggled them in a come hither motion, hitting something that made Shawn cry out. Dane stopped for a moment, about to ask if Shawn was okay, but Shawn spoke first.

Dane repeated the motion, pulling another gasp of pleasure from Shawn.

After a couple minutes, Dane added a third finger. Shawn hissed in pain, but Dane slowed his movements until his partner adjusted to the width.

When he was ready, Shawn begged for more.

He swallowed hard, then nodded, grabbing the lube again as he pumped his cock back to full hardness and swabbed the slippery gel around his length.

With a groan, he slid inside, pausing once he was fully in to let Shawn adjust to his girth.

"Fuck.." Dane clenched his jaw and groaned - he couldn't stay still for much longer. But still he waited, waited for Shawn to nod and say "okay. I'm ready."

Dane started to rock his hips, pulling almost all the way out before he slammed back into him.

He was fucking Shawn.

"Oh god, fuck, Dane, yes, right there, Fuck!" Shawn cried out, nails digging into Danes back as he lifted himself into him, thrusting back against Dane with each movement. Whatever spot Dane was hitting felt amazing.

Dane thrust into him hard, over and over. Shawn grasped his own dick and pumped fast, moaning in pleasure. They both groaned, thrusting into each other again and again until their bodies stiffened and they grunted.

They shifted, Danes softening cock slipping out of Shawn at the movement. Dane got up and discarded the piece of very full latex before crawling back into bed with Shawn and wrapping his arms around him. Shawn curled into Dane, and they soon fell asleep. They would deal with words in the morning.