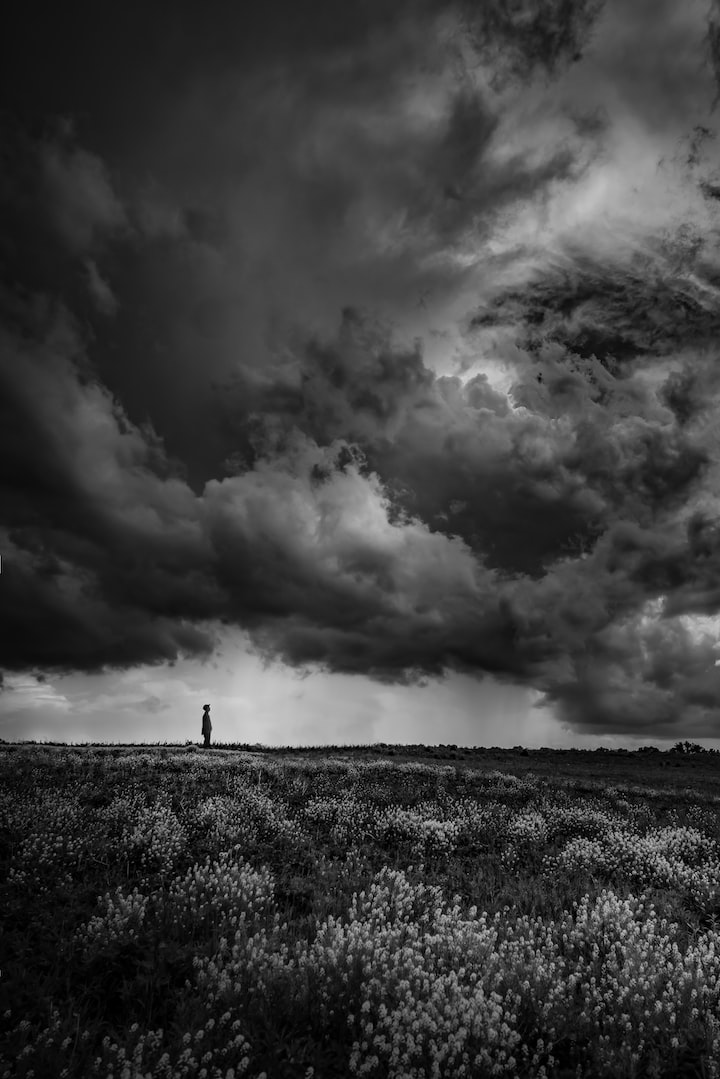 Photo by Todd Trapani on Unsplash

Black. A glassy reflection to it that made him think of beached whales, slick with oil after a tanker spill. He blew smoke down into it and watched it swirl and linger like a fog. Slowly, it faded and the features of his face reappeared in disjointed form, fragmented in the rippled liquid. Fragmented, he thought. Pulled apart. The liquid settled further and his face came into clear view within it. Broken. He pulled on his cigarette, exhaled and brought the coffee to his lips.

The heat of it forced his body to shudder in the morning cold. He winced and chased it with another drag of his cigarette.

He turned to look around the grounds. The trees were browned and naked. The concrete pavement was loose and uneven and grey. The sky mirrored what it looked upon.

The others stood in twos and threes and did so in silence, smoking and sipping their coffees. Their backs facing the fences, turned away from the outside world and whatever waited for them there. Whether this was a conscious or subconscious act, Atticus did not know.

He killed the end of his cigarette and let it fall into his cup and listened to the feint sizzle. He looked around once more, at the trees and the concrete and the faces and the looming sky, above them all. The faces looked beyond him, into the past.

She woke to the noise of hard rain falling. In these parts, winter swallowed the concept of time and darkness became the light. Arching shadows of the street stretched across the bedroom wall and she watched the rain run its shape over them. She reached out instinctively beside her and felt for him. The cold sheets, burnt her touch.

She retreated her arm and coiled it around her goosefleshed breasts, embraced herself and tried to forget.

The air felt full and heavy. It left a taste of metal on the tongue. He looked to the window. The sky foreshadowed a beautiful chaos. Nimbostratus formations, dense and powerful and violent, collided like the tectonic plates they towered over. He recalled camping with his Father as a boy.

The sky moved like a great wave, an entire ocean pushing down upon them as if the sky itself was falling. Thunder echoed and roared through the valleys whilst he sought protection beneath his Father's arms and behind fastened eyes, he prayed that he would save them.

"It's alright, Son. You're safe," he whispered.

The mountain quaked and all around them the trees bowed and submitted to the majesty of the Universe as the heavens opened before them. He felt his Father's forearms forge their way through him, his fingers chiseling into his flesh. He knew then that he was safe and he sobbed.

"Atticus. Atticus, what is it ? Atticus, are you listening ?" she said.

He withdrew his attention from the window and from the past, "Yes, Dr.Crenshaw. I'm sorry, I was-"

"Someplace else," she interjected. "What was on your mind ?"

She sat back across the desk and allowed contemplation to settle into silence. She watched his face return slowly to the present. His eyes, were acrylic and spoke a language of their own. His face was hardened and aged beyond its natural years. She imagined men were intimidated by such a face and that women feared it.

She had seen it in many of her patients but none so much as him. Guilt had eroded his face like wind through rock. He held her gaze and his eyes told her, that that would be all for the day. She feared for him and before that fear took hold of her expression, she sat forward and attempted a half smile.

He stood and left.

She turned and faced the window and watched as the remaining fragment of light faded into its counterpart.

She made her way back to the staircase as framed faces of what once was smiled to her, frozen in the past. She returned to the bedroom and left the door ajar and listened from the bed, to the hollow sounds of electronic strangers drift throughout the house.

She lay there and pretended to hear them playing the gameshows. Shouting questions at the screen for Jeopardy! Atticus teasing Susie as she fawned over Allen Ludden and his opening line on Password Plus+. "Hi, Doll!" he would grin through the screen and their daughter would tint crimson and melt both their hearts. The show would end and the three of them would play together in the quiet of the evening.

Susie would stand in the middle of the room and do her best Allen Ludden impression, "Hi Doll!" and spectate as her Mother and Father attempted to guess eachothers passwords on the little hints whispered to her. Atticus would always lose, his eyes giving away too much. His drunken smirk breaking his poker face. Each time, Susie would demand: "Reset your password, Daddy!". Not even her impression of Allen Ludden could withstand the adoration she had for her Daddy. Everytime they played, the last password never changed.

Atticus would turn to Susie and lift her high, kiss her and tell her: "I love you."

The static sounds carried these memories like ghosts up the stairs and she hoped that they would stay and haunt her, just a while. Until she drifted back to sleep.

He lay in his room and listened to the storm push against the walls of this place. The windows were wired mesh inside and the bars across them were solid iron; he knew it wouldn't be enough. Nothing could stop it now.

The night seeped into the room like ink. A darkness embodied by an entity that seemed to breath black into the world itself. He was angry. He was ashamed and guilty. He was afraid. He couldn't defeat what he sealed as his fate. Lightening flashed in the black and beckoned the thunderous call of the Earth. He startled and clenched his fists and longed for his Father's grace. He prayed for his strength. He prayed for his love from a far away place. He prayed that he could hear him.

His last thoughts were of his family. The little time that they were given. The cruelty of them being taken away. The regret, that what took them were his own hands. His little Susie, his poor Marie.

He rose to meet it. His flesh exposed, he outstretched his arms and returned the Earth's roar as the walls of this place broke and gave way.

Writer and poet from Dublin, Ireland.

Lovers, drunks, crazies and the left behinds. Humans. These are the subjects I'm drawn too.

Hope you are too.

*All work here is owned by Dean F. Hardy*

More stories from Dean F. Hardy and writers in Fiction and other communities.