by Linda Rivenbark 11 days ago in recipe 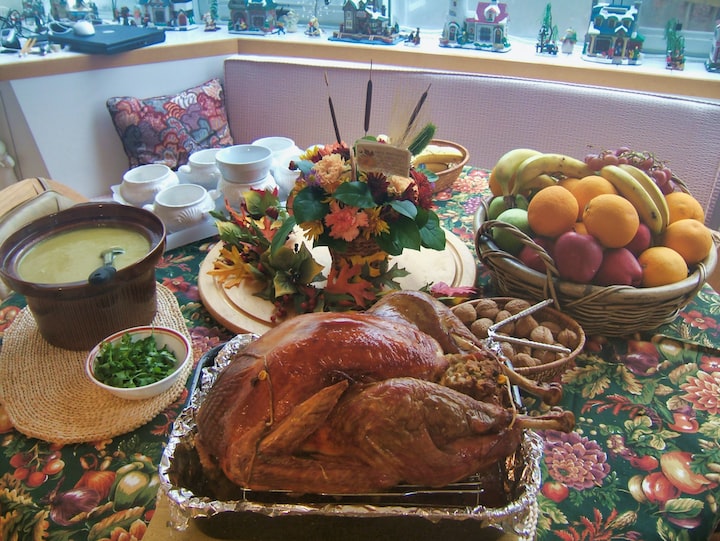 Photo by Christopher Ryan on Unsplash

Thanksgiving Day means different things to different people. It might mean making a long drive to be with family members and sharing love and laughter in a warm house full of hugs and happy greetings.

To others it means making a long, careful grocery list and shopping intentionally to stock up on all the necessary ingredients to create a buffet masterpiece. Once shopping is done and the menu completed, a mad rush might be made to clean and spit-shine the entire house for the anticipated Christmas decorating. Throughout all that, receiving the traveling guests might be the motivation for all the frenzy.

Some people live far away from all family members, but have chosen a family of friends to celebrate the holidays with. Since the people coming to these Thanksgiving gatherings have been chosen, it can be a real honor to be included!

A meaningful tradition of some families is to invite a person they know or know about who has no family or are far away from their families at Thanksgiving. This gesture can lead to a wonderful, even surprising, experience for both host and guest.

Thanksgiving Day in America is a part of our history that American children have been taught about from the earliest school years. Today, the long-touted facts are often a source of contention. Instead of celebrating, many mourn the long, painful conflict between the European colonists and the Native Americans who helped the 'pilgrims' survive their first bitterly cold winter in America in 1620.

The colonists involved were those who came across the Atlantic on a ship called the Mayflower. Many of them stayed on board the ship throughout that long, hard winter, and many died. It is reported on the website History.com that only about half of the Mayflower passengers lived to see the first spring in the New England region. Some highlights of Thanksgiving in America include:

President George Washington issued the first proclamation of a National Day of Thanksgiving in 1789.

During their terms in office, the 2nd president, John Adams, and the 4th president, James Madison, also designated specific days for giving thanks.

In 1827, the writer of “Mary had a Little Lamb” (the well-known nursery rhyme), as well as countless other works, Sarah Josepha Hale, began a campaign to establish a national holiday for thanksgiving. A 36-year campaign to make it happen included publishing editorials and writing letters to politicians like senators, governors, and presidents. For her tenacious efforts, she earned the nickname of “the Mother of Thanksgiving”.

In 1863, President Abraham Lincoln issued a proclamation which made Ms. Hale’s dream a reality by setting the final Thursday in November as Thanksgiving Day.

In 1941, President Franklin D. Roosevelt signed a bill that changed the observance of Thanksgiving Day in the U.S.A. to the fourth Thursday in November. So, if there happened to be a 5th Thursday, as sometimes happens, it would not affect the date of the holiday.

Other Thanksgiving Day activities include watching football games and parades. The most famous parade in the U.S. is the Macy's Thanksgiving Day Parade which was first presented in 1924. An estimated 2 to 3 million spectators watch the parade in person each year. A large television audience also watches the parade progress along its 2.5 mile route.

A tradition in which a President of the United States pardons one or two turkeys annually began in the middle of the 20th century or earlier. The pardoned turkeys are spared from being slaughtered and are awarded with retirement to a farm.

On a More Personal Note

Thanksgiving Day, to me, has always meant family time together, both immediate and extended family.

In my seventy (slightly +) years on this planet, I have gone the full gamut from child to senior citizen, from grandchild to grandparent.

I have witnessed some mind-boggling events in my closest circle and in the world at large. At times I have felt overwhelmed and could not see the light at the end of the tunnel.

But not for one split second have I ever felt I had nothing to be thankful for.

To begin counting my blessings this year, let me start with the gift of memory.

As one grows older, this gift is seen in a different light. Some of us in the golden years see and feel this wonderful gift being challenged and we may worry about losing the precious memories of the people we love most. So we take pictures and record videos to capture precious moments.

Writers have another way to encapsulate the precious memories in our lives...write it down. The challenge is in getting enough it it out. There is never enough time. But we keep coming back.

Times like Thanksgivings past are worthy of being remembered. What foods did we share around Mom and Dad's big oval shaped table? More about that in a few minutes.

TURKEY IS KING OF THANKSGIVING

I have heard many comments about roasted or baked turkey being dry and lacking in flavor. The first turkey I baked after getting married turned out surprisingly well, with one embarrassing exception.

With a houseful of guests, my new in-laws and nearly all of my new husband’s nine siblings, nieces, and nephews looking on, the thanksgiving turkey was being carved. A discovery was made that brought raucous laughter...the giblet packet was still embedded in the cavity of the 12-pound bird.

I later discovered a recipe for baking turkey that has never failed to produce a moist, flavorful main course. I have tweaked it a few times due to being out of a certain spice or just wanting to experiment.

Here is the recipe.

2 tablespoons seasoned salt **I like Lawry's and Stone Mill brands

2 to 4 tablespoons butter or margarine (for a 12-14 pound turkey, I think a full stick of one of the above is not too much, but I use half of the total amount (melted) to baste the turkey a time or two during the cooking process).

Garnish with kumquats and/or fresh sage.

Remove contents of turkey cavity (LOL). This may include not only the giblets in a small packet, but the neck and possibly a gravy pack as well).

Place turkey in broiler pan. (Note: It's your choice, but I always line the pan with heavy duty aluminum foil...you will be glad you did when clean-up time comes).

Combined spices listed above. Loosen the turkey skin and rub a generous amount of the spices on the breast areas under the skin. Rub spice mixture on outside skin and prick it all over with a sharp knife or fork. Melt half of the margarine and drizzle it over the entire turkey.

Wrap the aluminum foil (use enough foil to be able to do this step) snugly around turkey. Pour the cup of water in the pan to provide moisture as it begins to cook.

Follow instructions on the label of the packaging. A turkey this large will need 3 to 3 1/2 hours to cook. The general rule of thumb is usually 15 minutes for each pound of turkey. Use a meat thermometer inserted into the thickest part of the turkey. When the thermometer registers 165 degrees F, it is done.

Note: During the last hour of cooking time, open the top of the foil and fold it back to uncover top of turkey for browning.

After removing from oven, let the turkey 'rest' for about 20 to 30 minutes before carving.

Mix all ingredients. Put in greased casserole dish. Add topping (below) before baking at 350 degrees for 35 to 40 minutes.

1 cup chopped pecans (I often use walnuts instead)

Mix dry ingredients with margarine, using a knife or fork to cut margarine into the flour/brown sugar mixture. Crush nuts to desired size, coarsely or finely chopped) and add to above mixture.

Be sure to wash your hands thoroughly and spread the above mixture over top of the sweet potato mixture in the casserole dish.

Now add your favorite vegetables, casseroles, and desserts, and enjoy your Thanksgiving feast.

The above is not to be restricted to a single day of the year. On Christmas Eve, Christmas Day, New Years Day, or any time you want to brighten up the long, cold months of winter, cook to your heart's content and share the bounty with those special people in your life. And always Give Thanks!

“Stories are light. Light is precious in a world so dark. Begin at the beginning. Make some light.” – Kate DiCamillo

Thank you for reading my stories!