RDs finally Answer If Dark Chocolate is Good For You

AS
by Akil STEWART 4 days ago in healthy

Before you take that next bite 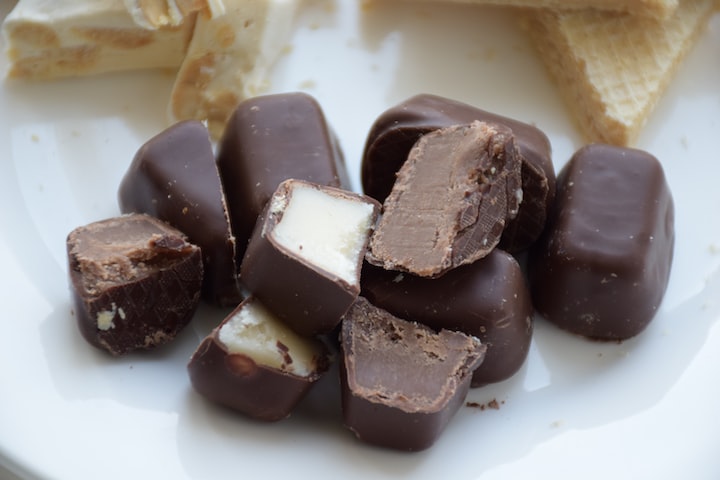 Photo by Catia Climovich on Unsplash

You might view dark chocolate as a health food, but is it? Before you bite into that piece of chocolate, understand why dark chocolate may not deserve the health halo it’s been wearing.

Chocolate may not be the nutritional equivalent of kale, but it’s still lauded as a healthy food far and wide because of the antioxidants it contains. And there’s data to suggest that chocolate, dark to be specific, can do a body and brain good. However, before you think this gives you license to scarf dark chocolate mini Milkyways like it's Halloween, there are caveats.

The Truth About Dark Chocolate and Health Benefits from Scientific Studies

In a study of more than 13,000 people, those who ate dark chocolate daily were 57% less likely to have depressive symptoms than those who didn't eat chocolate. That adults perform better on cognitive tests if they eat cocoa flavanols (the specific plant nutrients found in chocolate) before the test. And in a follow-up to the Framingham heart study, among 2,800 people over 60, those who ate and drank the most flavonoid-rich foods like dark chocolate also had the lowest risk of Alzheimer's and dementia. Still, other studies such as one published in the British Medical Journal link regular chocolate-eating among healthy individuals with a lower risk of contracting cardiovascular disease.

Why then would you not eat dark chocolate? It turns out that while dark chocolate may indeed be healthier than, say, a slice of chocolate cake or a bowl of chocolate ice cream, there’s a dark side to one of the world’s favorite so-called healthy sweets. Here’s what you need to know so you can make an informed decision about whether you’ll eat chocolate for your health.

The main ingredient in dark chocolate is cacao, which is basically the raw form of chocolate. Cacao's use for improving health dates as far back as 600 B.C., according to a study in Nutrients. Pure cacao is nutrient-dense and contains fiber, minerals, and flavonoids. “All of these can be beneficial to the health of your heart and circulatory system,” says Jessie Shafer, R.D., Colorado-based dietitian.

Comparing dark chocolate with high percentages of cacao to white and milk chocolate, which contains little to none of this nutrient and you find that milk chocolate and white chocolate not only contains less cacao than dark chocolate, but they also have a lot more sugar, as well as milk products (such as liquid milk, milk powder, or condensed milk), and other ingredients like soy lecithin. “This increases the sugar and fat content but often makes these chocolates more palatable, especially for people who don’t like the bitterness of dark chocolate,” Shafer says.

White chocolate is actually a misnomer. It is considered chocolate by culinary standards, but technically it isn’t chocolate, because it doesn’t contain cacao nibs or cacao powder, Shafer says. Instead, it’s made of cocoa butter, mixed with sugar and milk products.

Whether chocolate should be touted as a “health” food is controversial, according to experts. Although studies suggest that dark chocolate provides some benefits, experts, including those who believe that the healthiest diet is a whole-food, plant-based approach, don’t advocate for dark chocolate.

“Studies might show an association between cocoa flavanols, or chocolate, and a specific health outcome, but the association does not mean causation,” says Rosane Oliveira, Ph.D., a Visiting Clinical Professor in Public Health Sciences at the University of California Davis, and president of the Plant-Based Life Foundation.

The pro-chocolate studies are also conducted on the general population or on people who don’t follow a plant-based diet and as such, may only be relevant to people eating the standard American diet. “When the only vegetables people eat are (fried) potatoes and tomatoes, any food with higher phytonutrient content (like chocolate) may show a health benefit,” she says. She notes that similar results are seen in studies on olive oil and red wine.

In terms of saturated fat, the American Heart Association recommends that you keep your intake to less than five percent of your total daily calories. “Not only does saturated fat increase LDL (“bad”) cholesterol, it also induces insulin resistance that may lead to the onset of many chronic diseases like obesity, metabolic syndrome, type 2 diabetes, non-alcoholic liver disease, and cardiovascular disease, to name a few,” Oliveira says.

Yet keeping saturated fat under five percent if you’re eating chocolate is tough. That’s because chocolate, even cacao nibs, is high in saturated fat. A single one-ounce square of 70 to 85 percent dark chocolate contains 12 grams of fat, Shafer says.

If you love dark chocolate, you might hit your max saturated fat. That means you’d have to carefully watch that you don’t eat other sources of saturated fat in the day, Oliveira says, adding that there are better whole food sources of fat like chia seeds and flaxseed that come with more sugar and no added sugar and void of things like stimulants, namely caffeine.

The most talked-about sources of caffeine are things like coffee and energy drinks. Almost nobody mentions the caffeine in chocolate – “one ounce of dark chocolate contains about one-eighth the amount as a cup of coffee,” Shafer says – but it’s there, as is another stimulant called theobromine.

Caffeine, however, is a drug and has a direct effect on how you sleep, keeping people from falling asleep easily and/or sleeping soundly through the night. Theobromine, found in cacao nibs and cocoa powder, can also negatively affect sleep, and sleep woes can lead to health issues.

“How badly somebody sleeps has been linked to a higher risk of overweight and obesity and development of diseases like type 2 diabetes and dementia,” Oliveira says, adding that dark chocolate has the highest amount of caffeine compared to other types, and the higher the quality of chocolate, the higher the amount of caffeine. Worse? Two factors, age, and a genetic mutation that about half the population has, slow caffeine clearance in your body.

Caffeine also robs calcium from the diet. So, too, do animal protein, and sodium, and the more of these three things you have in your diet, the more calcium you excrete from your kidneys. “That’s a problem for women who are worried about their risk of osteoporosis after menopause,” Oliveira says.

Now onto that added sugar, which the World Health Organizations recommends limiting to below five percent of total calories in a day’s time. The problem with added sugar? “A diet with excess added sugar is a risk factor for all kinds of health problems, including unwanted weight gain, inflammation, high cholesterol, high blood pressure, diabetes, and more,” Shafer says.

While the added sugar in chocolate is a small concern compared to its other ingredients, it depends on how dark chocolate is fitting into your diet. If you’re using it to replace an after-dinner dessert, “you could be eating less sugar than you were before,” Shafer says. But if you’re just adding chocolate to your diet because you think it’s healthy and not eliminating anything else, then the added sugar is a concern.

Now that you know the conundrums surrounding chocolate, this is a question you’ll have to answer for yourself. If you’re eating it because of chocolate’s health halo, that might be the wrong reason. “When it comes to health, I put dark chocolate in the same category as red wine,” Shafer says. “There are nuances that make red wine a better choice than white wine or beer or liquor, but saying that dark chocolate is healthy in the say way we interpret sweet potatoes or beans to be healthy is not exactly right.”

Each food should be evaluated among similar choices, Shafer says. However, she does say that if you’re choosing dark chocolate because you like it and want to use it to replace other low-nutrient, high-added sugar foods you’re eating and curb sweet cravings to prevent further sweet eating, it can be a wise choice.

Meanwhile, Oliveira encourages people to consider chocolate a treat, which may or may not work for your diet. “Just know the risks of eating it,” she says, comparing it to drinking red wine in spite of the health risks.

Besides, there are many other plant-based foods that have higher phytonutrient content and higher antioxidant capacity versus cocoa or chocolate. “Nobody needs to add cacao or chocolate to their diet to benefit from health-promoting properties of different phytonutrients,” Oliveira says.

What to Look for in a Dark Chocolate

If, though, you are going to indulge in dark chocolate, keep a few guidelines in mind. First, look for one with a high amount of cacao – usually 70 percent or higher – and no added dairy, soy lecithin, sugar alcohols, or palm oil, Shafer says. Also, look for one with 10 grams or less of added sugar.

Consider where chocolate is being sourced from. Because people love chocolate, there’s a high demand for cacao tree production, grown in tropic climates along the world’s equator. “Whenever there is high demand for an agricultural product, there’s a risk of deforestation, soil contamination or degradation, and high use of herbicides and pesticides,” Shafer says. When possible, choose USDA organic certified dark chocolate and Fair Trade certified, which indicates the cacao farmers were given a fair wage. And of course, check that the chocolate is vegan.

The original article was posted here