by Elsa 2 months ago in recipe
Report Story

A little something different for summer 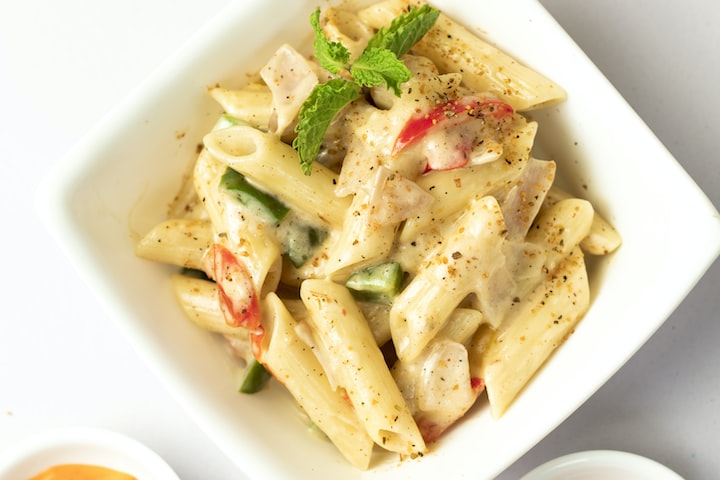 Photo by Pixzolo Photography on Unsplash

Everyone has different go-to recipe for different times of the year. Lately, I have been on a pasta salad kick.

When I was a kid, we always had family get togethers, carnes asadas, (barbeques) and everyone brought dishes. I had one aunt who made the best pasta salad. I have never been much of a meat eater so at carnes asadas, I would always go for her pasta salad.

Her salad was the perfect staple for our summer carnes asadas. Just delicious a fresh. I love mayo and I think it just made the pasta so creamy. She made a catering size of it for our large family, that’s why it was 2 boxes of macaroni and so much mayo. She would add tons of pepper in it and it gave it a little kick.

I made her version many times but I have tweaked it to my current taste and food changes.

5 slices of deli Turkey cut up into small pieces

I usually make it for myself and my family, 1 box of macaroni is more than enough. I still love mayo but I changed it to low-fat mayo. A little less calories but still with that mayo taste. I no longer eat pork so instead of ham I have switched it to turkey. The carrots add a touch of veg and they are pretty tasty. The celery adds a little crunch to it. I took the pimientos out because I started to not really care for the taste. I also just add tons of pepper and a bit of salt.

We do have carnes asadas still and we all being dishes together. I make my pasta salad and it’s a hit! It has some variation of my aunt’s but with a little twist.

I know everyone has their own take on pasta salad. Some people add olives or mustard, others don’t add a meat to it, etc. It’s just like potato salad, there are many different ways to make them!

At work, we have had a few pot-lucks. I honeslty hate when they happen. I don’t know how other people keep their kitchens or how clean they are when they cook. But I participate and bring my dishes as well. I either make my pasta salad or scalloped potatoes, depending on the time of year.

There was one pot-luck that I would never forget. One of my coworkers brought their version of pasta salad and being that it’s one my favorite things, I gave it a shot.

It looked different for sure. It had olives, pepperoni, and made with the swirly pasta. I did not like that they had added one specific item that, in my opinion, doesn’t go in pasta salad…it had bits of cherries in it. Those bright red cherries you get on your ice cream! They were cut up and I thought they were pimientos before I realized they were cherries. Also, instead of mayo, it was made with oil.

I am not sure if cherries in pasta salad is a thing but that was the first and last time I had seen them in one. Is it a thing? Is there someone else out there that makes it like that? In my opinion, olives and cherries don’t mix well. We all have different taste buds but it tasted off with the pepperoni and olives.

Well, I hope this summer is full of yummy pasta salad, without cherries!

More stories from Elsa and writers in Feast and other communities.