by Renee 8 months ago in guilty

Sometimes you win big, sometimes it might not be what you expected... 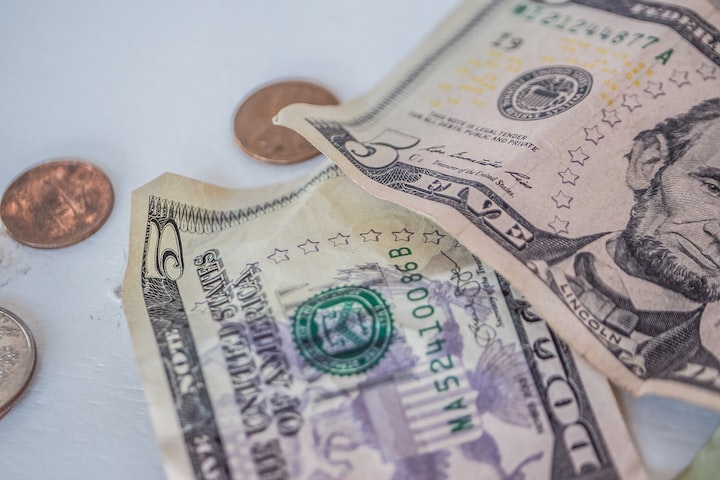 Photo by Jessica Lewis on Unsplash

He slapped a $5 bill down on the peachy counter.

Doris reached behind her to grab his lotto cards of the day. She let her fingers flit over the stacks of cards perfumed with promise. One scratch-off compelled her to grab it. The other one she grabbed felt like disappointment, and the Little Lotto card was a bust-- she could tell, but she picked it up anyways.

"Here you go," she rung up the cards and slid them over the counter to him as if she were offering him a large salary on the sly.

"You know, you'd better give me a little cut of the winnings when you finally get somethin'," doing her best to connect, she gave him a little smile.

"Oh uhm, yeah. I guess I'd better," he wasn't used to her actually giving a damn. It took him by surprise.

Flustered, he walked out the corner store and headed to his old Ford truck. Inside, he looked at the cards, feeling their fortune, not knowing if it was good or bad... He wasn't ready yet. He hesitated for a few minutes, the door ajar with his hand on the handle, hearing the incessant dinging of his car's chime alerting him to either stay put or get out.

His work boots hit the ground, and before he really processed what he was doing, he quickly went back into the store and approached the counter where Doris was just taking off her forest green vest she had to wear while on the clock. He couldn't believe his luck.

"Are you clocking out?" He asked earnestly.

"Yes, I believe I am..." normally she would have said such a sentence with her lifeless, sarcastic tone. But, here she was, actually looking at him in the eye almost like she was looking at him for the first time. She noted the hesitant look in his eyes and she felt something for him that she knew she shouldn't just brush off.

"Well," his nerves got the better of him as he chickened out. "I just wanted to wish you a good day." He turned around quickly and rushed out the door. If he had looked back, he would have caught a glimpse of Doris, considering going after him but she couldn't get her legs to move. She let the unknown compelling opportunity slip away. As did he; he all but jumped into his truck, slammed the door, started the rumbling engine and drove off towards his favorite place, hoping it would comfort him after that strange encounter with someone he had thought he had known too well for ages.

After 9 miles, he arrived: Paperbirch Park. With his lottery cards in hand, he strode over to a park bench overlooking the pond. Paper birch trees decorate the park with their beautifully imperfect peeling bark. He sat down, and took a good look at the cards before he pulled out his keys to scratch. He went through the first scratch-off. Nothing... nothing...$1.... nothing. Hey, at least he got back enough to buy another ticket tomorrow. He slid that disappointing card into his pocket and began to focus his attention on the second card. It felt heavier in his hand. He blew off the grayish debris from his car key and started to unveil his fortune little by little... empty...empty...empty... then he saw it, something he had never seen before during his daily scratching attempts: a cartoon image of a little black book, one that he used to have.

His palms started to sweat and he felt hot despite the autumnal air. He felt like he was being watched and quickly swiveled around, looking for any curious onlookers. But he was alone. He didn't want to be.

With a feeling of uneasiness brewing in his slender body, he gathered his things and went back to his truck. His favorite place no longer felt welcoming and safe. The sun was setting as he quickly drove back to the corner store. He knew it would be close to closing time but he had to figure out what that little black book cartoon was all about.

His headlights swung around the parking lot to reveal a few late customers ambling to their cars. The shop was closing for the evening so he ran inside before it was too late. Much to his relief, the doors were unlocked.

"Hello?" his voice seemed to echo more than it should have. But maybe he was just panicked. Something about that little black book didn't sit right with him.

No answer. But he heard a door swing open and the sound of heavy footsteps approach. "Might I help you?" a curious new voice asked. The overhead lights flickered, then Hank spotted him: the owner.

"Good evenin' sir, I uh just had a quick problem to sort," his words stumbled out awkwardly. "Well, I don't really know how quick, but I'm hopin' you'll be able to tell me what's this all about." The scratch-off felt even heavier in his hand than before. The little book even blacker.

"Ah, you're looking to cash in. Come, I'll sort you out." The owner didn't sound like the rest of the people in this small, country town. He looked vaguely familiar but Hank wasn't sure. His skin was pale and it was hard to tell how old he was. Maybe in his early thirties? Maybe fifties? Hank chalked it up to the bizarre hue coming from the suddenly sinister sunset. Was it supposed to be stormy today?

The owner reached out his hand and Hank gladly handed over the scratch-off card. He didn't want to be holding it any longer.

"I've been wondering who would win this lot," the owner's scoff made Hank feel even worse. He ducked down, underneath the counter and Hank could hear the sound of a drawer being unlocked and then pulled open. It sounded like it hadn't been opened for ages. THWACK!

On the counter, the owner slapped down the little black book, it looked just like the cartoon. Its cover was pristine, its pages bright white. Hank just looked at it dumbfounded and confused.

"There you are, dear boy," the owner smiled wryly. "It's all yours."

Hank wanted to get out of there so badly that he didn't want to ask any of the questions that were drowning his brain. So he grabbed the cool, smooth book and rushed out of there into the darkening evening.

"HANK!" a concerned voice called out to him.

He turned around to see a young woman running over to him.

"Doris? What is going on?" He met her halfway and she grabbed onto his arms.

"I just... had such a strange feeling earlier. About that card. And I couldn't stop thinking about it. The more I thought, the more worried I got." Her words spilled out of her mouth like a prophetic flood. "I felt something so strong, at first... I thought it was a good thing but then it all just felt... wrong."

When she uttered that word, he couldn't help but to look down at the book: its perfect cover was somehow now weathered and battered, that pages yellowed and torn. He dropped it on the ground, hoping he too wasn't afflicted by some untimely decay.

Upon its sudden thud onto the pavement, the book opened up to reveal cash... lots and lots of cash. He and Doris locked astonished eyes before looking down at the book again.

"How much do you think is there?" She whispered, hoping no one else saw what just happened. They quickly gathered up the crisp bills and hurried over to Hank's truck. They counted: $20,000. They had no clue how that many bills fit into that little black book. They examined it to find no logical explanation but they also saw something peculiar. On the last page... there was an address.

She thought about it a few seconds longer before a terrified look tinged her medium skin tone with a sickly shade of gray. "It's... my old house."

After careful consideration, and a somber drive, they pulled up to an old manor. Hank had been here before and he remembered that it was really something back in the day, but now it was decaying and seemingly uninhabitable. Doris reached over to Hank, squeezed his free hand and said, "we can do this."

Hank nodded and together they approached the creaky front porch. Everything inside him told him to turn away, take the money and leave this town! but he also knew that wouldn't be a good idea. He had to figure out what was going on before he would ever feel secure using that money.

"Hah!" Hank suddenly let out a big laugh. Doris looked at him questioningly, with one eyebrow raised. "I guess you're gettin' a cut of my winnings after all. You get to enjoy this situation we've got goin' on!"

She wasn't quite in a humorous mood. But she managed to chuckle and sarcastically squeak out, "yeah, lucky me!"

They got to the over-sized wooden door and knocked. No answer. But the door scooted open a little. They looked at each other and then pushed open the door together.

"Anybody here?" Doris called out.

"Come," a body-less voice beckoned out. Hank grabbed onto her shoulder but she quickly shrugged him off.

"It's coming from upstairs. Let's go." She mustered some courage that Hank couldn't fathom but he wanted to. So, he trailed behind her. They reached the upper landing and heard the voice again.

"I think it's in my bedroom," Her steely composure was now starting to falter a tad. Hank nodded at her and was the one to push on the dusty door.

Inside the room, it was dimly lit by some candles. Hank could make out the silhouettes of some furniture covered in sheets. And then he saw him: the owner.

"What are you doing here, Dad?" Doris ran over to him and flung her arms around him, sitting on a teetering chair.

"He is your dad?!" Hank asked incredulously. Then, he started to connect the dots as he remembered how he knew this man, only the last time he saw him, he was dead...

"Oh, you're a clever boy... I think you can figure it out." She rose up and skulked over to him, obscured by the darkness.

Flashes of memories from his past blinded him as he remembered what he wanted to forget: the robbery.

"No..." he stumbled backwards. "I never meant for it to happen like that... Please."

"Please stop..." He wanted to flee, like he had in the past. But he knew he had to face the music.

Doris continued, "you see, you didn't just ruin one man's life... you ruined an entire family. And for what?" She asked, but she knew the answer...

"A measly twenty-k..." she shook her head, still disbelieving her bad lot in life. "You ruined my... OUR life for a quick buck. So, here you go!"

She threw the book at him, the bills spilled out as the little black book crashed on the ground. Hank saw them shrivel up and burst into flames! He knew better than to run away, for his time had finally come. The reckoning was finally settled.

Receive stories by Renee in your feed
Renee
Read next: What Happened to the Yuba County Five?