California, Here I Was

What could have been... 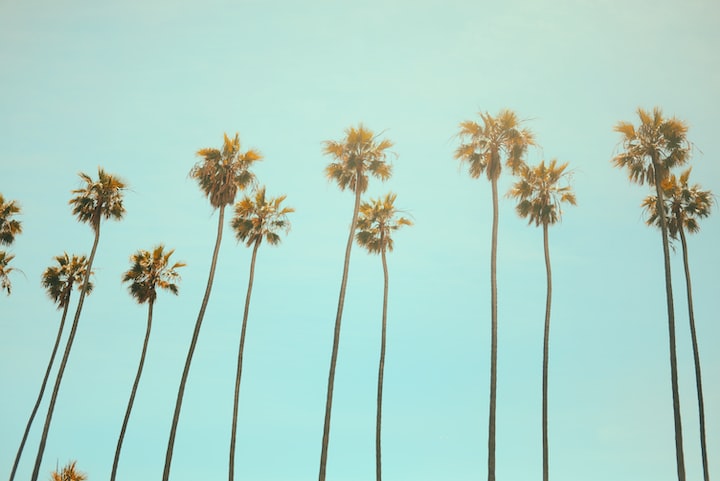 Photo by Julian Myles on Unsplash

Here we are, at the beginning of another autumn. Kids are back in school, leaves are still hanging on, the temperature is falling, and everyone I know is still trying to get every last drop of summer before it runs out (half the people are still in shorts in my neighbourhood). I am wondering, quite seriously, how I am going to pay my rent at the end of the month – a lot of money will have to be moved around and begged for – and considering how this could coincide with my birthday (a terrible coincidence). And with all of this in mind, I have let the mind wander.

This is a good thing; I keep good notes. I have found something that makes me wonder what my life could have been if my mother had made a very serious decision.

In the summer of ’84 or ’85 – covered in earlier pieces on my page – we took a long road trip to California, spent a few days in the land of endless sun and heat, and then flew home. A very interesting and significant moment in my life, but not nearly as unsettling or world-shifting as something my mother admitted to me when we returned home.

She wanted to stay.

Her plan was formed when the family we drove with came to Canada and stayed with us first. Her best friend, Jennifer, was a nurse in the same nursing home as my mother, and was living in Southern California. My mother’s decision to drive back with them was one that she made on the fly. But the decision she did not make was one that took a few days to form.

She wanted to live in California.

I really do not think it would have been that big of a shock for her. The heat was unbearable, the sun never seemed to give you a break, and the houses we saw were surrounded by expanses of dirt. Everyone we knew sounded like complete strangers who were trying to communicate with the natives (none of this was too much of a shock for a West Indian living in Southern Ontario). And that Ontario was something we would not lose (Jennifer lived in Ontario, California – still makes me laugh). No, she would be just fine with it. The only thing that prevented her from making the jump was the actual salary for nurses. That was it. So, she gave up on the idea.

I did not; I really could not. I knew that my life would be different.

I would be something else.

I cannot even wonder how shocked I would be to suddenly become an American citizen at the age of ten. I really do not know how I would feel living near people who once tried to shoot me (see longer piece on California I wrote earlier). But I have some ideas:

1. I have to start at a new school at the end of the first summer, so my mother would start looking around to see which ones had the best teachers. Now, based on Jennifer’s daughter, the younger and impossible Nathalie, they could not be the best schools for children. This would be a great shock after the mini-UN that was my grade school. I feel I would have to adjust to being forced into certain groups based on my race and love of language and books. Most of my education would be outside of school at the library. And may I say that I did not see a single one while I was there. Malls? Oh, yes. Artificial lake for swimmers who could not make it to the beach? Definitely. Libraries? Um… It would be a big shock.

2. In high school, I would realize that it is a waste of time, and begin looking for work. Hollywood is right around the corner, but I would decide not to pursue a career as an actor. With my grades, I can study business administration, which would give me some skills, but working outside of my comfort zone would be key. I would attempt to try as many jobs as I can and whatever sticks would be enjoyable for me.

3. As a young man, I would have a reputation for doing my best in a difficult situation, including working through an earthquake (’89 is an important moment). With the trust and the work that I am doing, I expect I would be able to take a chance on having a proper license that I would not simply let expire and fall into disuse. It would be impossible to work and live in a city like Los Angeles without a car. Possibly, my job would be related to the world of the automobile. Delivery services? Catering? Chauffeur? I like the last option.

4. At a certain point in life, I would be established in the industry, perhaps married with children. Upon discovering my wife’s affair, my children and I will decide that a change in life might be best for all of us. They will be at the same age I was when we left Canada. And I will visit some old family and friends and consider moving to the Great White North. The kids may also protest for the first week, but after time spent in Vancouver, Toronto, Montreal and even the Maritimes – I will try to visit all of these cities while there – they will see my point of view.

5. Retirement in Canada would be ideal for someone with American currency (it has been a very long time since our dollars reached parity). The kids might stay with their families in the country, but I know that they have their lives to lead and will not pressure them to stay. They will have to figure things out on their own.

More stories from Kendall Defoe and writers in Wander and other communities.