by Alan Russell 4 months ago in celebrities

I have just two questions for you

These 30 words have a clarity and a logic to them. To people who believe that the United Kingdom (UK) should leave the European Union (EU), their clarity and logic becomes evangelical as it reinforces their own belief frameworks; the EU is restrictive and is holding the UK back as a trading nation. Attribute those 30 words to an international film star such as John Cleese with the backing of the LEAV.EU pressure group and they take on a messianic quality.

In the international market for goods and services, ‘protectionism’ is the implementation of policies by an individual country or bloc of countries whose objectives are to restrict their imports. It can be achieved with the most obvious of policies like tariffs which are very topical with the dialogue between China and the United States. Less obvious policies are quotas and foreign exchange controls. Reasons for imposing protectionist policies are political and economic, to protect domestic industries and national security either individually or as part of an overall policy package.

Whatever the reasons, protectionist policies are in direct conflict with the fundamental beliefs of the classical school of economics. Theorists such as Adam Smith (An Inquiry into the Nature and Causes of the Wealth of Nations) and David Ricardo successfully fought the restrictive Corn Laws that were imposed to protect the British farmers from cheap imports but unintentionally caused hardships amongst the wider population.

Smith and Ricardo believed that the one of the conditions which countries could generate maximum wealth and achieve economic development was that they could trade freely in the international markets, exporting the goods they could produce cheaply and importing goods they could not produce at prices determined by a market, free of any restrictive and protectionist policies.

To put the words of John Cleese into some context, I found a database maintained and updated by the Fraser Institute in Canada. The institute has collated data from 162 countries and converted it into 70 metrics for each of the 162 countries. These 70 metrics include Government Consumption, Size of Government, different property rights, Private Sector Credit and most importantly for this piece, Freedom to Trade Internationally.

Each metric is measured on a scale of ‘0’ to ‘10’, ‘0’ being the worst measure and ‘10’ the best measure. So, the closer to a score of '10' a country is awarded for the freedom to trade internationally, the more open its borders are to import and export.

Of the 162 countries in the database, only four are tariff-free. They are Hong Kong, Macau, Libya and Brunei. So, that means 158 countries are guilty of imposing trade tariffs to restrict imports. Within this group is the United Kingdom and the 27 other members of the EU. The Netherlands has the most freedom to trade internationally with a score of 8.66. Greece has the least freedom with a score of 7.68. The UK is in fourth place with 8.43. 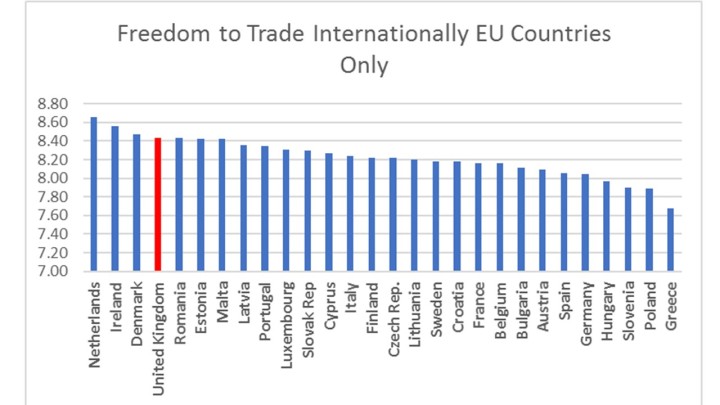 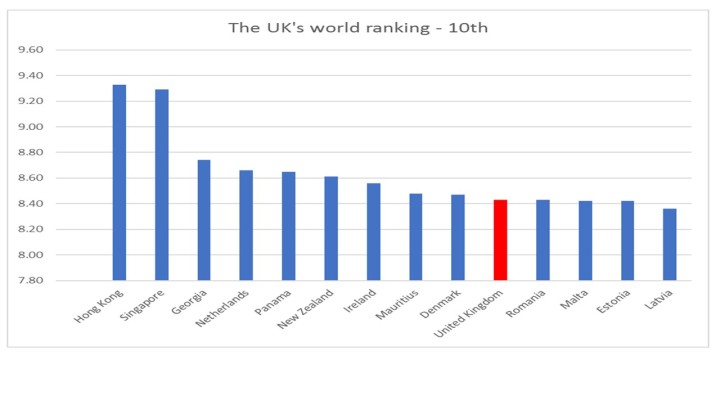 This data then raises two questions for supporters of BREXIT.

If, as they believe, the EU is so restrictive of how its members trade with the rest of the world, how can it be that there is such a variation in the metric for the freedom to trade internationally?

And, can they be absolutely positive that if the UK does leave the EU as a result of having to strike unilateral trade deals that it will not find its freedom to trade internationally reduced especially if it signs such a trade deal with the United States?

NOTE – The Fraser Institute of Canada is a charity funded public policy think tank and ranks 23rd out of the top 100 such bodies across the world. It is an august and respected body established in 1974 with the mission statement ‘to measure, study, and communicate the impact of competitive markets and government intervention on the welfare of individuals.’

It is described as ‘politically conservative and libertarian’ and envisions ‘a free and prosperous world where individuals benefit from greater choice, competitive markets, and personal responsibility’.

This means that the data has been sourced from an organisation that has a similar belief framework as supporters of BREXIT; a world that is free of protectionism and cannot be associated with ‘Project Fear’.