The Dark Side of The Moon

by Danny Fantom 3 months ago in anxiety

I really struggle with anxiety. 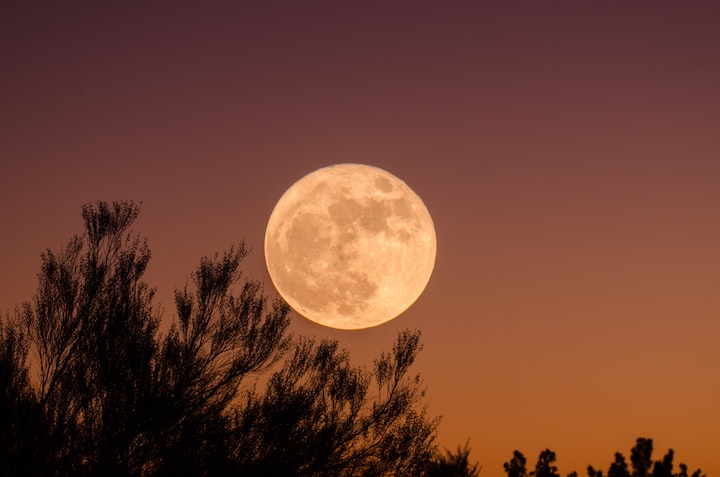 Photo by Ganapathy Kumar on Unsplash

On April 4th, my chest ached. I wasn't physically hurt, nothing had impacted my breastbone or anything . . . but sometimes I got like this. A restless irritation buzzing in my limbs, a tight chest that felt like a heavy weight was pressing down on it, and this urge like I was going to cry (and a serious fear that I wouldn't be able to stop). I was not comfortable standing and pacing, nor was it any better to curl up into as tight a ball as possible. My existence was discomfort and my focus was unrelentingly focused on that.

I've struggled with anxiety since turning 21 years old. I'm not officially diagnosed with any sort of anxiety disorder (I have neither the time or money to start the process), but one doesn't need to be certified to understand that their struggles with themselves are valid, do they? It's your body, your mind, you know when something just isn't right. That was the feeling I got on the night of the fourth, hours before I would need to get ready for work. There's no real successful way I've found to easily combat this. Sometimes breathing techniques work, or ASMR, or getting up and walking around. That night nothing did. I was stuck in this . . . quagmire of a defeatist mentality where I knew with certainty that nothing I was doing was changing anything in my life. Nothing was working for me, plenty was working against me, and worst of all it was entirely my own fault. My weaknesses and deficiencies were the cause of the troubles in my life, and my inability to control or eradicate them would result in a measly life followed by a merciful if not unimportant death. I would be alone, lonely, and a stain on anything good or valued for the rest of my life . . . and nothing I was doing or trying to change would actually end up being anything worthwhile.

Well, fuck you too, brain.

I knew I needed to get these thought out somehow. They needed to be purged, but how? I've only felt this urge to be, erm, "performative" with my coping maybe once before. The memory was slightly fuzzy, the occasion having happened at 3 a.m. I remembered then that what I had done was grabbed one of my many notebooks lying around, flipped to a random page, and just started writing. I wrote wishes, and confessions, and despairs, and I remember that there wasn't a lot of hope in that paper just sadness . . . but it helped. So, I was willing to try it.

I didn't grab a notebook or even my nearby sketchbook. I opened up my laptop, and started a new Google document. I looked at that blank white expanse, and faltered. I wasn't moved to write down any particular thing . . . hadn't I felt compelled to the last time? I thought about it, and figured that like last time, I would need to pet pen to paper, metaphorically in this case. So I set fingertips to keys, heels of my palms to either side of the mousepad.

It came out of me like I wasn't even the one doing the typing.

My fingers moved without prior thought by me, and I was nearly shocked at the words appearing on the screen. I still have the document, and I'll add a few pieces in this article just to . . . just to keep it authentic.

I just. I’m not the best at anything. You need to bet he besta things to succeed but I’m not the best. I’m not cutthroat I’m not persistent enough to make it in this world. I’m not supposed to be int his world I’m not strong enough I just keep waiting to see if the next wave is gonna bowl me over and I don’t even try to prepare for it.

I can't spell very well when I'm spiralling, turns out. Looking at this now, it's almost like looking through a mirror into another dimension, and yet its too familiar to be anything other than me. I'm nestled into blankets watching Phoenician Sailor right now, Sleepytime tea cooling down so I can guzzle it later. I'm so much better now, but that was me at one point and it most certainly will be me again some time in the future. As much as I wish it wouldn't be.

I consider myself someone who goes with the flow about 70% of the time, but the other 30% is pure and unbridled panic and unease at the plans that don't work out for me. It's silly, and I know it- plans aren't foolproof and life is constant change. It's something that can actually be a comfort, especially if you aren't content with this particular phase of your life. It will change! And yet . . . there's a time where your feet are stuck in quicksand and you're sinking so fast and you can't even begin to think of a next step to get out of the mess you're in.

I feel so ill equipped for life. Like I'm spluttering on water, and I'm not drowning yet but the panic and too little air is not doing me any good. To keep this swimming analogy going: I learned how to float and that was pretty easy, and while a lot of others took initiative to start practicing strokes I was pretty okay with just floating, watching through crystal clear waters as beautiful fish darted past and sunlight sparkled on the moving water. And then when it was actually time to line up for the race, I was hella confused while a lot of other folks were starting their breaststrokes or butterflies . . . and now it's like I'm watching everybody around me swim ahead but I never practiced my strokes so all I can do is float in a forward direction and maybe doggy paddle. Doggy paddle technique really doesn't serve you well when the waves start to swell, I'll tell you that.

I’m so tired of things just falling apart. All the plans I try, all the work they just fall apart. I wanna drive and not stop. Find a place that’s soft and nice and where you don’t have to be the best among a million of the best vying for a scrap of dried leftover. I wish i could elave twitter like i lfet facebook but its funny sometimes but bad most of the time and i need it to try and push my work. I’m bad at pushing.

I've gotten a lot better at maintaining boundaries but hell I am not, nor will I ever be, very good at making and selling a personal brand. I don't want a personal brand. I want to put work out, have it read and enjoyed, and then log off and go sit on my porch. A lot of this document is self pitying and whiney, but that's okay because I can be self pitying and whining when the bough breaks and I'm falling through branches. I have a low tolerance for pain be it physical or emotional and that's just the way I'm built.

I don’t want a house i want to drive my roots are poisoned and i can’t afford to be home anymore. Florida doesn’t wanna be my home anymore they wanna home silicone valley and i can barely afford alligator alley.

I won't be able to afford an apartment next year. Not by myself, and all my friends I know looking for a new lease will be looking in the summer. I won't . . . I'm working full time and budgeting and still . . . still. It's funny, because when 2020 was just starting I had this crazy, bold, outrageous idea to let my lease run out. I was going to drop all of my crap in storage, take just a duffle bag and suitcase of things, and just take a cross country road trip. I had no love for my job, I was giving up on the possibility of finding more meaningful work and it just hit me that I was treating work as more meaningful than my life. I'd been so restrained and resistant to all ideas of vacations my mom put forth because I was dead broke and I couldn't afford a vacation or the bills that would be there after a vacation.

But . . . that was always going to be my reality. I wasn't getting anything from any job listings, my current job wasn't looking to advance me . . . why was I sitting around waiting for some miracle when I-95 was right there??? It was so foolish. What was I going to buy gas with, the five cent I make from Vocal? Was I just going to stumble upon some roadside bar in need of a hungry, sarcastic little shit who they could whip into shape as a bartender??? No, seriously, what was I thinking?!

So, of course that didn't happen. I renewed my lease (and my hatred of my obnoxious neighbors), and good thing too since 2020 just destroyed us. Now I'm filled with even more wanderlust but I'm in a better job and I've started to make some concrete changes. I'm still so tired, and I've been trying to do more exercise, more stretching, multivitamins and whatever else-

I'm still so tired. It's gotten to the point where it doesn't feel like burnout anymore, not even pandemic fueled burnout but like . . . I've lost so much hope that the sliver I have left is nowhere near enough to keep my head up. I try to check my perspective, my privilege but . . . fuck I just want better and it's not even like, materialistically you know? I want better for humans in general. I want society to not benefit the select few with very exclusive tax brackets. I want the people in power to care a lot more about the land they live on, the lands they stole and finagled out of the hands and mouths of others. I want power to not be so inexplicably imbalanced between the few and the far too many. I want food to be so much more available than it is, and social services to be public and fully accessible and not this big debate like a comfortable life is a privilege bestowed to the worthy. I want-! I want to be able to do something solid for this, beyond voting and researching and signing petitions but that requires an energy and courage I just don't have.

. . . im just so weak and i shouldn’t have been born in this world that’s so awful i can’t make it here please help me please help em

I need to drink more water. For all that would help

I’m so alone. I’m lonely. I just want to be able to pick up the phone and know i can call someone at any time, for any reason but i hate to be a burden. I HATE this idea that you should shout your problems to the void. I hate being so quiet.

I hate myself sometimes. Just as much as I love myself sometimes. The two can mix or alternate based on a lot of factors. What remains constant is that it fades. You know, we actually never see the dark side of the moon? We always see the same face because it rotates on its axis at the same time the earth does. I think that's kind of a great metaphor for us and our struggles inside. You never truly see your anxiety but you know it's there and it is as much a part of you as the shiny bits that face the sun. You alone know your struggles, your dark side, and the people outside of us can only imagine what we tell them.