The Deer Skull Dude. The Harbinger of Stress. 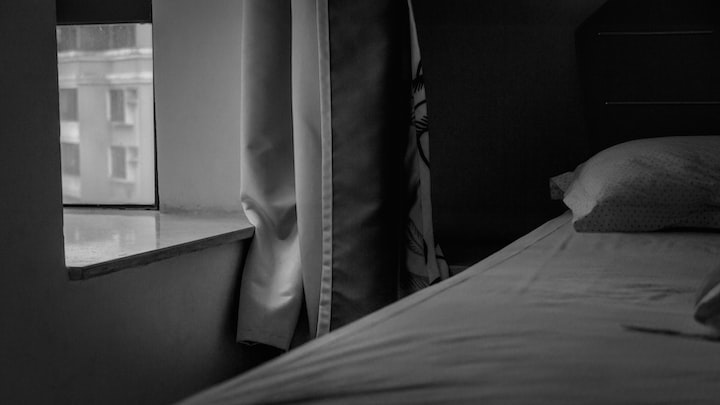 Photo by Qusv Yang on Unsplash

I don't know how common it is to have one specific hallucination during sleep paralysis that appears every time. An image or creature that is exactly the same regardless of the rest of the experience. Sometimes in different places around the room but otherwise very consistent. Steven is my consistent hallucination and we have come to know each other well. I call him a "demon" endearingly like one might refer to their child as "spawn".

Steven is a noble creature. I named him because when he made his first appearance I was going through a phase where I enjoyed using the phrase "not today, Satan". I don't want to inflate his ego so I thought Steven would be better suited for him but has that same ring to it- "not today, Steven". I use "him/his" pronouns to describe Steven because he's always around when my anxiety spikes, but if I'm being honest I'm pretty sure Steven doesn't have genitalia.

What Steven lacks in gender he makes up for in charisma. He stands at roughly seven feet tall, shaped like Quasimodo, and wearing a black robe that I'm pretty sure is made from the pelts of lesser demons. He is always carrying a staff that I call his "Rafiki stick". I know I am making him sound comical but I need everyone to understand that I do this for my own sanity. If I were to acknowledge how utterly fucking terrifying he is, I'd never sleep and I LOVE SLEEP.

If a seven foot tall hunchback shadow with a walking stick isn't unsettling enough, he has a deer skull for a head. So, there is that. His eyes are just black holes and he never really shows much emotion, as skulls rarely do. I sometimes wonder about his life outside of work, you know, what he does when he's not preying on my fragile state of mind. He is just so good at his job that I hope he isn't falling short in other areas of his existence.

Does he have kids? How good is his retirement plan? Is his wife happy?

What I do know about Steven is that he comes with a very specific skill set that is presented in the form of a series of events. These events always happen in the same order. A warning, a performance, and an apology. Every time. The consistency should be comforting but this is sleep paralysis. Nothing comforting happens here.

I go to bed stressed.

Something is weighing heavy on my soul and I am struggling to find the energy to go on so I decide to sleep instead.

Falling asleep is always surprisingly easy when I'm anxious or stressed. Before you start to envy me, I think this ability might just be the third option to "fight or flight". Some call it "play dead". I've just subconsciously decided that staying completely still until the stress loses interest is the best idea.

Then the rain starts.

It begins slow and quiet. Like a sprinkling on a tin roof. I can hear a rainstorm just slowly rolling in. No big deal. I love the sound of rain and even though I am very aware of the bedroom now, I always manage to forget that I don't have a tin roof.

The rain gets louder but I'm still not bothered.

The storm sounds more like a waterfall now. The tin roof is gone so water is just crashing into more water. Thinking about it now, Steven might be the reason I hate "white noise" or "rain sounds". He might also be the reason I don't trust people that can fall asleep listening to them as if sleeping inside a dead television signal is comforting.

The waterfall is just white noise now and I can FEEL the static.

The static starts at the tops of my shoulders, creeping up my neck and into my skull. In real time this probably happens within a millisecond but because brains are dicks, I'm convinced this is a ten minute process where Steven is actively paralyzing me with his demonic powers. By the time the static hits the back of my eyes, I am fully aware that the rain is a lie and I try to move. Steven always starts with my head. My eyes are open, I try to shake my head free because I've forgotten that I have arms or legs that I can use.

The static is now just a deafening screech in both ears, I'm immobile, and I am angry.

Steven is rarely in the same place twice. He is always doing his best to keep my mind working hard. Sometimes, he even adds other characters to create a distraction so he can sneak in and really give me a surprise.

If Steven isn't performing alone, it is always someone I know well or see daily.

As an example, I once had a supervisor at my work who has a very distinct and loud laugh. Steven brought her along, sat her in a rocking chair in the corner of my room and instructed her to just laugh at me. The whole room turned a pale blue and Steven's shadow loomed over me from outside my bedroom window as my supervisor laughed maniacally.

On other occasions he will stand at my bedside looking down on me disapprovingly. Even though his head is a deer skull and he is generally emotionless I tend to get the sense that he's a very judgemental soul.

Once he just stood in the doorway to my room and his robes vibrated.

That only sounds hilarious. Fabric vibrating might not be scary on its own but if you put that fabric on a giant hunchback deer demon it is frightening.

For every performance of his, I lie there wide eyed and furious about being held hostage as his audience. My body can't move, my head feels like it is under a lead weight. The static is still screeching into my ears. All I can do is yell profanities at him. All I can think to do during these episodes is insult him. Come to think of it, I can see why he is so good at his job, it must be easy to torture someone that is so verbally abusive.

More recently, because I am in a much better place mentally, I only catch quick glimpses of him after the warning. Usually above me where the headboard should be. He will loom there and hold my head still with what I imagine are long bony fingers that create white noise under my skin. I have learned that instead of shouting at him, I focus every ounce of energy on violently shaking my head free from his loud grip. Just a very vigorous "NOT TODAY, STEVEN" and I can make him go away on a good night.

His performances are generally short but exhausting. My body will start to move once he disappears and I can get comfortable for ACTUAL sleep.

I am not entirely sure if the last phase of these visits is actually an apology but by humanizing the thing that scares me I feel like I am taking back some power. If I give it a name, a back story, a personality then it is a much less terrifying thing. "He's just a regular deer faced dude, doing his job and doing it well."

This apology comes in the form of the absolute best sleep. Every. Time. After the paralysis, the fear, and the hallucinations I sleep hard. Sometimes I even get some really cool and detailed dreams!

It's like actually getting good compensation for poor service.

Steven knows his job is to be an asshole and he is thanking me for my time.

I'm not a sleep specialist but I would love to hear from others about their experiences with sleep paralysis. My Instagram handle is listed below if anyone feels inclined to share their stories with me. You are not alone in your experience with sleep troubles and although I've taken an approach that makes light of the situation, I know that doesn't work for everyone. If my method sounds like it would work well for you, give it a try! It doesn't make the experience any less uncomfortable as it is happening but laughing about it can make the fear easier to cope with once it's all over.

As always, thank you for the read and if you enjoyed it, please give it a like and a share! You can find me on Instagram @cookiebiscuit20 for regular updates on my Vocal posts along with pics of my day-to-day adventures!

Be sure to also check out my other postings if you haven't already! I've been told they're funny.

I'll always use my outside voice.

More stories from Linda Dyke and writers in Psyche and other communities.