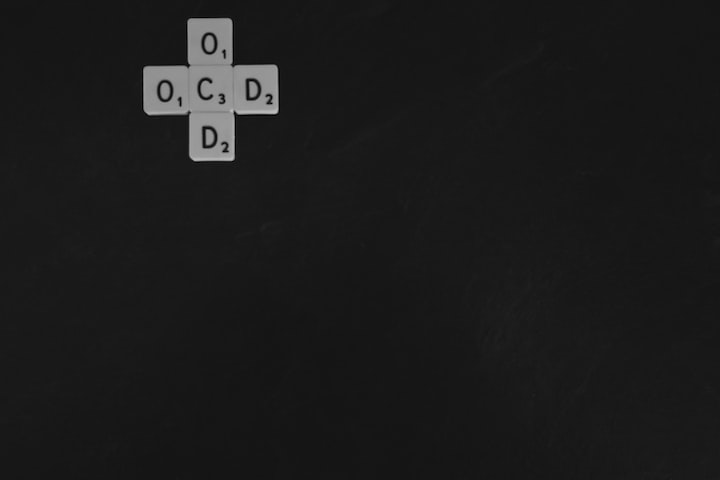 I have Obsessive Compulsive Disorder. Or as it's more commonly known: OCD.

I was not diagnosed, officially, until I was in my mid-twenties. However, it wasn't until just a week ago that I truly understood what it meant, besides the glaringly obvious fact that I will pull my hair straight out of my head if not medicated properly. (Trichotillomania is the official term. It's a subset of OCD)

As some may remember me saying in a previous article, I always thought the hair pulling was a side effect of my anxiety. Even when I eventually found an actual psychiatrist years ago who diagnosed me with it and called it OCD, I didn't truly grasp the concept. After all, I am not an overly neat or organized person, which is how the majority of people always describe OCD.

Then, four days ago, a creator I've grown to respect greatly during my time on Vocal posted an article that changed everything. Courtney Capone is a phenomenal writer and I originally found myself drawn to her posts because of her quality animal content (particularly after her adorable cat article). She has a way of explaining things and writing feelings out that reminds me a lot of myself. I find that I laugh just as often as I want to raise my hand and shout 'Preach!'

This particular post of hers covered a wide range of topics that I agree with but none so much as her description of what OCD really means.

Obsessive Compulsive Disorder comes with intrusive delusional thinking. It's not a matter of needing to wash the dishes as soon as dinner is over because you don't like having a sink full of dirty dishes. It's the belief that if you don't clean those dishes, your parents will get cancer. The only way to save them is to wash the dishes.

It's the belief that if you sleep on the left side of the bed instead of the right, the oceans will drain and the world will crumble.

It's the belief that if you don't lock the door 3 times in a row, your house will burn to the ground.

People believe they have OCD because they're obsessed with cleanliness and feel a compulsion to clean. That's not a disorder, it's a personality trait. The obsession in OCD is the intrusive disordered thoughts that cause a compulsion. If you don't have those thoughts, you don't have OCD.

That. That right there. *chef's kiss*

It was like a light bulb literally went off in my head. Suddenly, a thousand quirks that I grew up hiding seemed to slide into place. Their previously misshapen edges fitting together and filling in the larger puzzle that makes up me as a whole.

Allow me to go back and explain for a moment.

I started pulling my hair at the age of two. Two! I was born before the mental health awakening society as a whole has been slowly opening up to in recent years so my mother didn't have any idea what to do. My aunt also has trichotillomania, though, so she at least wasn't entirely in the dark. Still, despite her best efforts (which included putting a kerchief on my head so I wouldn't pull my hair while she wasn't around), things only progressed from there.

As I grew up, I always carried around the dirty little secret of my hair-pulling. It was weird. I was weird. I tried not to do it around other kids but if you know anything about trich (sorry, writing it out every time is getting old) then you know that it's not really a conscious decision. Even now, properly medicated and no longer actively pulling, if I am extremely anxious then my hand goes right to my head. This means that when I was young, I couldn't stop myself from doing it, and I was ashamed and embarrassed every time someone noticed and asked me "what the heck are you doing?!"

I am lucky in that my trich has never been one of the more extreme cases I read about. I never pulled my eyelashes or eyebrows, nor did I eat the hair once it was pulled out. (Thank all the deities for that, honestly) The only things I had to worry about were people seeing me and making fun of me for it or people seeing all the little tiny balls of rolled-up hair around my room/house and wondering if I was so unclean I had an infestation of bugs or something.

While the trich is definitely partly influenced by anxiety, I didn't realize until I read Courtney's words all the other things I do that really define me as someone with OCD.

Did you know that I have to eat my Starbursts in a particular order or else I feel like the world will cease to spin on its axis? Or that if I do not wear the same necklace everyday then I will most certainly meet an untimely demise? OR that I have to go upstairs to settle for sleep at somewhere between 9:15 and 9:30pm or else I will surely not sleep at all and therefore implode? Or, my personal favorite, if my routine is even slightly disrupted (i.e. changed or cancelled plans) then volcanoes will erupt and cause Apocalypse-level destruction so I obviously have to freak out to the point of lashing out at others in anger?

Of course you didn't know. Who would even think of such ridiculous things?

Me. It's me. I am that ridiculous.

Trust me when I say, those are only a few examples of my quirks and habits. I don't want to scare bore you by divulging all of them. Not to mention I couldn't even think of them all if I tried.

Thanks to some really good friends, some GREAT parents, and proper medication, all of this is pretty well-managed now. At least for the most part. I'm not perfect but the people who love and surround me have made sure I know I'm not bad either. They make sure I know I am loved and I have nothing to be ashamed of. I don't have to hide. I always have people who have my back beside me. In my younger years, that definitely included my parents telling me not to pull when I didn't realize I was doing it while watching television or even lightly smacking my hand away from my head. My friends in high school took up that mantle when my parents weren't around too and I can't describe how grateful I am to all of them. Especially my parents who had to put up with the emotional turmoil 24/7.

Nowadays, likely nobody I've met recently really knows the extent of my OCD and I like to keep it that way. I would probably be what most call 'high-functioning' without the trich added in. That part adds a little fun fear of eventually going bald from pulling so much to the mix.

You may not believe that last one but sadly I know someone who has fallen victim to that unfortunate side-effect. I do not want to follow suit.

It used to be a true testament of how much I trust you if you knew about my OCD. I suppose that's still true, at least until now.

Please be gentle with my trust now that you've been let in on the secret.

More stories from Heather Miller and writers in Psyche and other communities.