Being Bipolar: Now in Color

by Olivia Bulnes about a year ago in bipolar 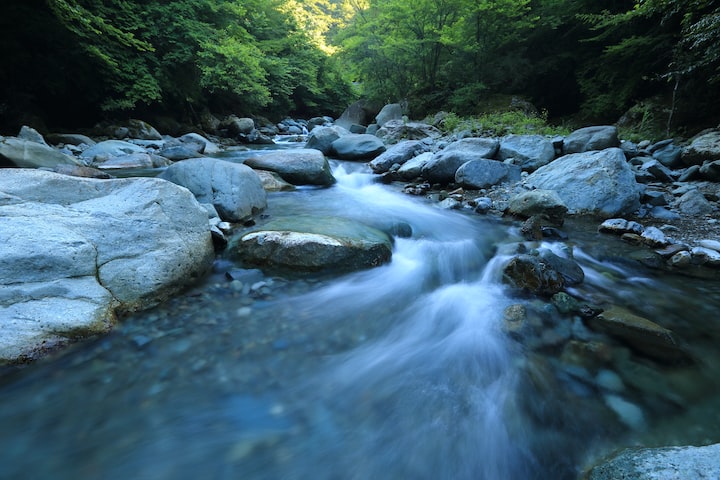 Photo by kazuend on Unsplash

In my life, I have experienced no sound in nature more beautiful than that of water. Water in almost any form, whether it be running water, dripping water, splashing water, or crashing water. I have always found the sound to be beautiful.

I remember visiting the Rocky Mountains for the first time in my life as a young girl very many years ago, and after stopping on the side of the road I walked up to the side of busy mountain creek. I heard that beautiful sound again, the sound of water. I saw the water running down the creek over the many stones.

I began to wonder so many things. How long had the stones been there? How many drops of water had they encountered? How did the water and the stones become…themselves? I wondered how many hundreds, thousands, hundreds of thousands, millions of millions of years had the stones had been there and how many drops of water they had met. Had that particular stone I was looking at, ever meet the drop of water that had just touched it the instant before? I remembered from school that rocks took anywhere from a few years to hundreds of thousands of years to form. It took trillions of little drops of water to form the smooth surface that the rock I stared at to become what it was at that very moment.

I believe that as individuals we are as tiny drops of water that touch each other in the tiniest of ways every moment, and even though it might take half a second or up to millions of years, we each will shape each other to make ourselves the individuals we are “in the end.” The only question is, who do we remember that shaped us? My gender, my personality, my experiences, everything, the woman I am today, is based on many things, on so many “drops of water” that have formed me over the years. So many people that I have encountered over my lifetime.

I don’t know if it is possible to summarize my entire experiences of becoming a woman in such a short period of time we call this life, but I think there are certain points that have impressed on me more than anything else in my entire life. I think growing up in Texas, moving to Minnesota, moving back to Texas, and living in several other places before coming to Colorado have made me realize that the world around us is just as big as the one within us. I think that I would like to explain my becoming a woman, from the beginning, growing up in Texas.

I was born in Lubbock, Texas in the year of 1985. I was born to two Hispanic parents, both born in the United States, and they were children themselves of individuals all born in the United States. It turns out I am the third generation to be born in the United States for a lineage that seems to be primarily Mexican. I find it hard to distinguish myself as anything other than “me” and “brown” when I am forced to think beyond the standard on the identification forms. I think that it is confusing the endless names that people are called, but in the end, we are all just human. Unfortunately, the society in which we live does not all believe that, and we have a very long-standing history of barricaded minds filled with vastly different ideas, yet such closely bonded blood.

I was quite young, and we had a small house. The days were always ridiculously hot and dusty, and the dirt was always red. I would play for an awfully long time outside when I was little as my dad fixed cars outside, or my mom hung clothes on our clothesline as I remember. I think that I spent a lot of time thinking about things, but I am not sure not what it could have been that I was thinking of as a four-year-old child. I had two older brothers and I would be the only girl. I had a mother, father, and my aunt lived in a small house behind our house. The way things happened were simple, and I don’t think there was any way that they could be simpler at the time, until something happened that seemed to throw everyone off except me.

My mother was one of the most beautiful women a lot of people had seen, and my dad always talked about how there was not a more beautiful woman than her in the whole town. She had been the queen of prom, a top performing student, always had her nails done perfectly, and had lots of friends. She was an example of what I think most girls would consider to be “perfect.” It was even a fact among the five girls in her family that she was the most beautiful, most achieved, most intelligent, most graceful, and the list of “Most’s” did go on. The point was, that my mom was the all-around perfect “girly girl” who seemed to do everything right regardless of any outside opinions.

I’m not sure exactly how or when it happened, but I know that I started to like to write, even before I knew how to write. No one really understood it, and neither did I, but I did what I felt. I was drawn to pen and paper, or whatever writing utensil and whatever served as a paper or canvas at the moment. Not that this was a bad thing at all, in fact it was something to be joyous about. It would be a joy that a child was drawn to a form of expression or educational form that should make most parents happy. I don’t think it was that I liked to write as much as the fact that I hated Barbie dolls, dressing up, makeup, and I mostly stayed to myself. I think that everyone sensed as a “danger.” I was not going in the correct direction of a Hispanic woman to my mother’s standards, nor to those of others in our close family circle.

I had my ears pierced, my hair was always “done”, my mom started buying me more dresses, and always made me dress in a way that I thought was odd, even though I didn’t understand it. My brother came along, and I was four years older than him. I don’t think that this helped my mother’s ideas or views about me, except that I didn’t act like my brother at all. I wasn’t “girly”, but I wasn’t a “tom-boy” either. I was JUST ME. I think that this was a mass confusion for my mother.

I grew a little older, and before I knew it, I was getting ready for kindergarten. In the class I went to there were several kids of all colors, but they all spoke English. This was different from home since we were all the same color, but all spoke not only English but also Spanish. The teacher had so many interesting things to say, it was like watching Mr. Rodgers but in person, and I was so excited and so intrigued, but somehow, I was the only one. Most of the kids would talk or cry or fidget, and I just did not understand it. They upset me because they did not stay quiet when I wanted to hear the things our teacher had to say. She talked about the weather, and letters, and numbers, and hung on to every single word. I loved school, and again, somehow, I seemed to be the only one. My love of school was going to change over time, but never my craving of knowledge.

Sadly, my time at kindergarten in Texas was truly short. My mother had been diagnosed with Lupus, and the treatment she was receiving was not beneficial or even plausible as far as cost. My parents decided that a move to Minnesota was going to improve many things. I know now that it did improve many things, but I still find it hard to believe that it was the only solution as my parents always made it seem to be.

Time can be as much of an answer as a mystery. What would have happened if we had stayed in Texas? We know have many answers, but at the same time many more mysteries because the possibilities of “What if?” are never ending. I start my story telling you about my life as a young girl with a dream. Why? That is simply because, a dream is a wish your heart makes. I have always dreamed, but I have always reached just as high. I might have not always been able to grasp, but I sure have reached. I hope you continue to read with me. There is a long road in being Bipolar, but the ride is worth it. Stay with me and let us talk some more again soon.

More stories from Olivia Bulnes and writers in Psyche and other communities.