I cut out alcohol from my diet and this is what happened.

by Keisha Oleaga 27 days ago in humanity

The results were shocking! 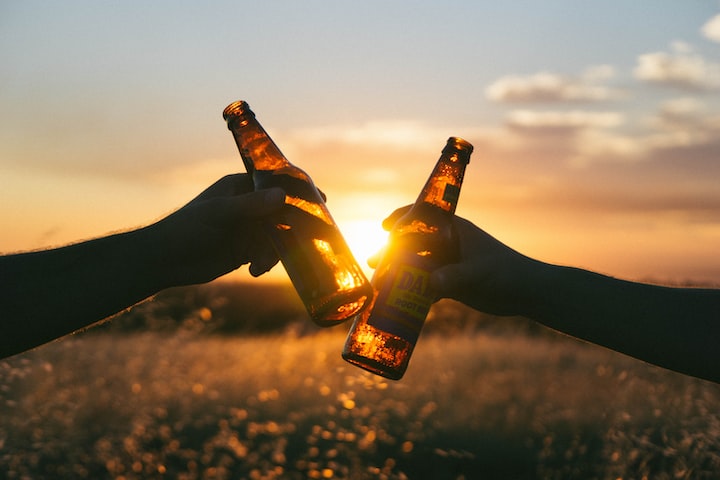 As a young adolescent teenager or college student, in America, there is something that starts to become constantly encouraged and accepted by the society around you, and that is alcohol. It’s all around you and probably has been since you were growing up. You see it in tv commercials, movies, restaurants, family gathers, and social media. Alcohol is something that culturally we have found a way to integrate into our lives and society has entirely normalized drinking and quite frankly, encourages it.

Yet the more “normal” and “accepted” alcohol becomes, the easier it is for more people to overlook the dangers of alcohol abuse.

I was just as wrapped up in it as anyone else. I had my first drink in high school and since then, continued to drink at common social events. Every weekend your friends would want to hang out, drink a couple of beers, have a good time and have fun. Yet, the problem starts when those fun weekends with your pals become every weekend, a couple of times a week after work, social events, parties, birthdays, holidays, etc. Society makes sure to give you as many possible events and reasons to drink.

While many think peer pressure ends after high school or college, for many adults it doesn’t. Visiting friends, going to social or family events, and even coworkers who make it a habit to grab a beer after work or hey its Happy Hour!

I was also under the idea, this was something normal. Something that everyone does and will do at one point or another in their lives. I never had a problem with drinking. I never felt like I HAD to have a drink or drank during the day. Until about a year ago, I sat up after a gruesome hangover and thought to myself,

I hated the taste of most beers and liquors, I hated slurring my words, I hated the ambiance that condoned excessive drinking, I hated the way it made me smell, and as I am sure many would agree with me, hangovers are horrible!

Not only did I start to resent the consequences of drinking alcohol and the way it made me feel after a heavy night of drinking, but my wallet and my body were starting to resent me for it as well.

Having a drink at dinner, or buying a bottle of wine or scotch can sound appetizing and worth it at the moment, but once you do start tracking what you spend on alcohol on a weekly or monthly basis, the numbers start to rack up. When you’re out at the bar with your friends, two or three 5 dollar beers might not sound like a lot, but let’s say you go out to the bar about 2–3 times a month. Each time you go you spend about $20 in drinks, that $60 a month, now multiply that by 12, that’s $720 a year! And I am only counting the times you go out to drink, not mentioning the bottles of wine or beers some may buy to have at home.

Once I stopped drinking, I found myself being able to save a lot more money monthly and going out to eat was much cheaper without an alcoholic drink.

It was affecting my health

I have always tried my best to maintain a healthy lifestyle and stay in good shape. Changing my diet and becoming a vegan at a young age had a lot to do with that and helped me a lot when I was starting in college, I lost a lot of weight and felt better. Along with going to the gym those first few years of college was when I was in my best shape. Yet, later on once I was drinking out almost every weekend or so I noticed I was gaining weight and fast. This instantly frustrated me since I was going to the gym about 4–5 times a week and eating healthy, yet no matter what I did I could not seem to take off the weight. I felt bloated, my face was breaking out, and I constantly felt tired.

In the beginning, when I was first cutting out alcohol, I felt the effects of it almost immediately. The bloating went away within a couple of days, and after a couple of weeks my acne cleared up entirely. I went back to my healthy eating and exercise routine and within only 3 months I lost over 20lbs!I was shocked!

It has entirely changed my social life

Yes, people do look at me a bit strange when I neglect a drink or when everyone goes out to eat and gets a cocktail or beer and I get water. strangers are quick to arch a brow and ask if I’m some sort of recovering alcoholic.

no on buys the simple “ Oh, no I just don’t drink alcohol anymore, but thank you!”

Everyone is quick to think that there must be something wrong. Maybe she’s pregnant, maybe she’s recovering from something, or she’s sick.

Not drinking has also made me realize how often people turn to drink alcohol in times of stress. I found myself being surrounded by friends who after a hard day of work, or a stressful argument with their partner would quickly shoot me a text saying, “ Hey, I could use a drink, want to go out?”

I could say my social life did take quite a turn. yet it did not exactly decrease in any way, I simply just found other social outlets to involve myself in. I started dedicating more times to my hobbies at home and spending more time with my friends and family in more intimate ways than going out for a drink at the bar.

I can’t say drinking is the worst thing a person can do because there are worst substances out there, but I believe more people should realize when they are drinking “too much” and analyze how alcohol has affected their own body. We should learn to encourage and support those around us who don’t drink alcohol, or don’t like drinking, let’s not make them feel uncomfortable or out of place for their own decisions.

See all posts by Keisha Oleaga →