The Tale of a Lobster

by Brigitte Bennet 2 months ago in advice
Report Story

Perhaps we are more like crustaceans than we think 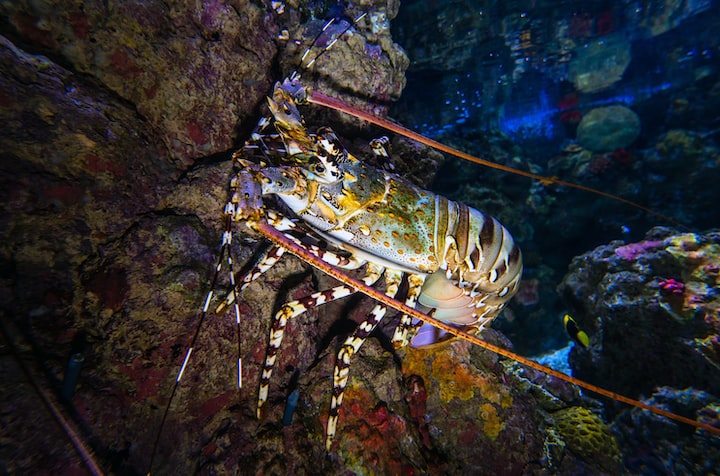 A sensible man once told me a strange tale about lobsters. Now understand he was not a mysterious stranger that I met on the street, some wandering old man from a fable with a stringy beard forcing upon me a story about sea creatures he believed would change my life. This tale came from a man I know, a born storyteller, the kind of person who has a way of capturing the attention of their audience and making any tale stay with you. But I remember this one more than most.

The story he told was about the posture of lobsters. It seems a strange topic for the conversation to turn to, but when we spoke it was as natural as breathing. According to the research that has, for some reason, been done on this topic, a lobster’s posture changes with its level of serotonin. Happy and confident lobsters pose more upright, uncurled and act more confident to other lobsters. Sad lobsters lie curled up and crouched and are easily intimidated. In my friend’s tale, he measured lobsters on a scale from 1-10, and told us that the Level 10 Lobsters will get first pick of everything a lobster needs.

The reason, he continued, that this is interesting, is because most animals don’t have this structure where serotonin decides their mood. Humans are also one of the few we know, and so a clinical psychologist posed that a lobster with such a simplistic nervous system having this same function could tell us something about human nature. This counter of how posture affects confidence and happiness lets us observe how it can change the life of even something as socially simplistic as a lobster. My friend ended his story by asking us what Level of Lobster we thought we were. Were we curled up, intimidated by the world, sitting at a Level 1? Or did we walk tall, shoulders back and chest out, striding through life at a Level 10?

I couldn’t get this question out of my head, and so, the next time we spoke of lobsters, I was eager to hear another aspect of what this could mean. It is odd to say that such a thing as lobsters became a common topic of conversation between us, but somehow in our conversations it never seemed strange at all. This time he told us that the same psychologist had posited that the posture of humans could affect our mood in a similar fashion. Standing tall could make you feel more confident, and slouching as though to hide made you feel lesser than those around you. My friend went on to pose to us that the best way to present yourself to the world was to “stand up forthrightly and stretch out like a level 10 lobster”, and that this would not only affect your own mood, but also change the way other lobsters looked at you. Of course, when I say other lobsters here I am talking about one’s own peers, but it is much more fun to get lost in the metaphor where each person is a lobster.

At the time in my life when I heard this story, I was dealing with a situation which made me anxious each time I entered it. I was working on a project run by people who had the nasty habit of attempting to solve problems by yelling at them, or better yet yelling at the people who had discovered them. Unfortunately, my job description was one that often included either discovering problems, or being related to their cause. The role also included the responsibility of solving most of these problems, but that did not decrease how often my superiors would yell at me merely for mentioning an issue. One day, a short while after having spoken to my friend, I was approaching this task and I found myself thinking about this lobster theory on my way there. I wondered if, that day, I was to say to myself that I was a Level 10 Lobster, if I was to walk in with my back straight and my head held high like I was prepared for anything: I wondered if it would make a difference. In reality I felt perhaps a Level 6 lobster at the most, doubting my capability to fulfil my role (as one is apt to do when they are criticised at almost every turn). But instead of worrying about what I might get wrong, or what I might not be able to fix, all the way there I said to myself “You are a Level 10 Lobster, and you will not allow anyone to tell you different”, and I found that in my head was my friend’s voice agreeing with me.

The moment I walked in there was, of course, already a problem, but instead of approaching it with trepidation and worrying about the fact I would be told I was somehow fixing it wrong, I approached it as though I knew I was capable of dealing with it, and perhaps all the yelling and anger was something of an overreaction. To my surprise I found that once it was solved, despite having been yelled at by more than one co-worker in the process, my Lobster Level had not decreased. I seemed to have won the proverbial lobster battle and had the extra serotonin to show for it. As the day went on, I found that not only was I less anxious and upset than usual, but in fact I was being yelled at just a little less too. Problems came and went at the same speed, and I even had to fix one that I caused myself, but the yelling directed at me was considerably less effective. By the time I left, my Lobster Level had probably decreased to around about 7, but I still felt secure in my capabilities rather than ending the day at about a 3 and feeling inferior to my fellow lobsters. When I next saw my friend I told him of my success, and I write this to tell you of the same.

Of course, thinking of lobsters does not remove one’s natural anxiety, but it seems to help a surprising amount. I think it is perhaps in part because of how ridiculous it sounds to wander around thinking “I am a Level 10 Lobster”: I have always found the ridiculous one of the best ways to fight fear. I think too that the psychologist may have been right about posture. I’m sure it helps that I am quite tall, but when I square my shoulders, and walk with my head high and my chest out, I feel much more able to take what the world might throw at me than when I walk along hunched, trying to blend into the crowd. Each time I say in my head too that I am a Level 10 Lobster, it makes me think of my friend and the confidence that he has in me, and as he is a sensible man I cannot think that confidence is wholly undeserved.

So, I leave you with the question that he left the first time he told me this tale: what’s your Lobster Level? If you stand tall, think of yourself unfurling as a confident lobster might, does that make it higher? I leave you to ponder as I have this tale of a lobster.

Writing first and foremost for fun, I've been dabbling in creative writing since childhood. Recently I've been working on developing two of my old novel ideas, as well as experimenting with writing a few shorter stories to improve my style.

More stories from Brigitte Bennet and writers in Motivation and other communities.