by Michael Halloran a day ago in self help

A timely reminder to act, not just contemplate. 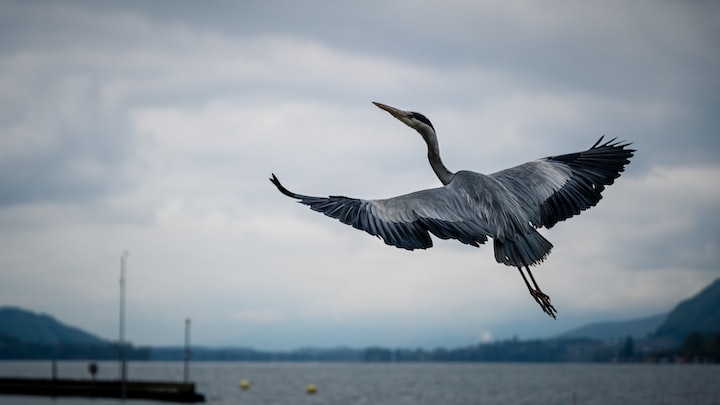 Photo by Florian Krumm on Unsplash

A white stork stands stock still, perfectly balanced on one leg, in the mudflats off the coast at low tide.

The stork appears to be thinking deeply, contemplating the meaning of life. Perhaps it is deciding on its next course of action. But it is also possible that it is just being a stork.

Apart from probing deeply into the mud for food with its perfectly designed beak, much of a stork’s life is spent balancing on one leg, as inert as a statue, seemingly contemplating … something.

Looking like a Chinese watercolour of an ancient river scene.

One day this stork will, of course, simply die. The oldest known wild white stork lived for 39 years.

A thought comes to me while observing this bird, perfectly still in the glassy setting.

The stork’s life parallels my own.

A rough poem starts to formulate …

In the mudflats off the coast

Perfectly balanced on one leg

In the mudflats off the coast

we do not know

But we do know

That while it spends

The best part of its life contemplating

It is not ‘doing’

You get my point.

I have become a stork, contemplating at the expense of doing.

When the balance is gone, however, one can ‘act’ without enough contemplation. Or (like me), contemplate too much, at the expense of acting.

A stork is a stork. It balances both physically and metaphorically because that is what storks do. They physically balance on one leg, stock still, and sometimes they find food and eat. They appear to be thinking. But nobody really knows, because we are not storks, and they don’t speak any language that we can understand. It is okay for them to spend much of their life seeming to contemplate because that is what storks do. It is what they have always done, and survival aside, the natural world does not demand much more of them.

We, on the other hand, have this frustrating gift which we call ‘self-awareness’.

We know that one day we will die, so there is an increasing sense of urgency as we age to create something, to leave a legacy. We want to validate our existence so that something of us remains after our physical body is gone.

I watch the stork out on the grey glassy-smooth mudflats. I envy the lack of urgency, but ironically its leisurely contemplation reminds me that I don’t have forever. Another birthday looms in the not-too-distant-future.

Contemplation is good but so is action.

So, when we return home I will fuel up the mower and mow the lawn. I will take time to notice the fragrance of freshly mown grass, the ache in my shoulders, and the discernible difference that I have made to the appearance of the yard.

Mowing is rewarding like that. There is a rapid and noticeable return for one's efforts, especially when the lawn is overdue for a trim.

And then I write. Thoughts which are never written or spoken are gone, sometimes forever.

Whatever cliché you prefer.

I act and validate my existence.

I may be a stork but now I'm starting to fly.