by Jason Ray Morton 6 months ago in happiness
Report Story 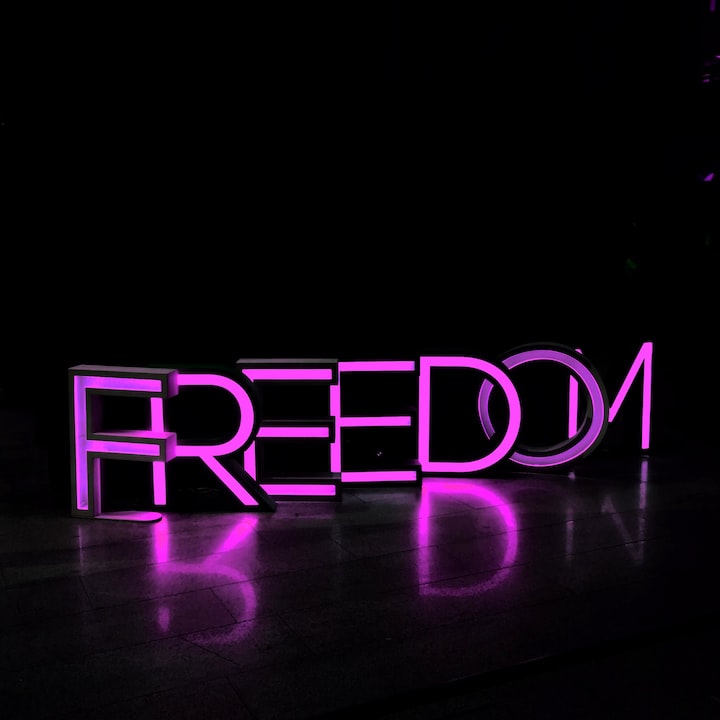 Photo by Kristina V on Unsplash

While many people may swear that our freedoms are disappearing, the country still feels pretty free. If I wanted to, even at this late hour of the day, I could get up and go for a drive. The ability to go out and clear one's head is a freedom that we take for granted. People should remember, their voices are theirs, but the ability to use those voices on a platform is something other countries control. Speaking out against the government in other countries is not allowed. In certain countries, people are taken from their homes and incarcerated for speaking against the government.

It's a freedom, like many, that we take for granted in the United States. There are many freedoms that we enjoy every day, regardless of the current state of the world.

the power or right to act, speak or think as one wants without hindrance or restraint

The Freedom To Fight Back

In the United States, as we witnessed in the Kyle Rittenhouse trial, we still have a right to defend ourselves from being physically attacked. However, in many parts of the world, the laws are different and less protective than in the U.S. In Countries like Armenia, domestic violence isn't always a criminal offense. In countries like Mali, it's often the victims of the assault that are taken into custody.

The Freedom To Own Property

In the United States, part of the American Dream is to own your own home. It's a freedom that in some countries can't be enjoyed the same way. Some countries, like that of Nigeria, technically own all of the country's land. Private land ownership becomes a much more difficult task than saving for a down payment, calling a real estate agent, and telling them what you're looking for.

Freedom To Become Your Own Boss

Known as the land of opportunity the American small businessman is often referred to as the backbone of our country. Considering how easily the entrepreneurially-minded get businesses off the ground, it is easy to see why it's known as a land of opportunities. With the fewest barriers of any country, incredible availability of resources, the United States remains a surprisingly easy place to start a business.

The Freedom To Travel

The United States is a huge place. For those of us that are fortunate enough to live here, all we have to do is save up some money, plan some time to get away, and hit the open road. Unlike other countries, we don't need a visa or papers to move from state to state and see the sites.

Since the mid-90s and the advantage of the internet we have been privy to a wealth of information at our fingertips, and in America we get to enjoy more of it than nearly any other country on earth. Our internet access is uncensored by the government and our usage goes relatively unmonitored compared to China, Russia, and Saudi Arabia.

In China, you may struggle to access the websites of companies that are in competition with Chinese business interests. In Russia, if a local media outlet is critical of the government it can be entirely shut down.

In the United States, if the police show up at your door without probable cause or a warrant, we are within our rights to ask them to leave. We remain entitled to a legitimate expectation of privacy in our own homes, our properties, and certain public places. The Fourth Amendment protects us from the abuses of unlawful search and seizure.

Freedom To Marry Whomever You Wish

In America, people are free to marry whomever they choose as long as they are two consenting adults and of sound mind. As of only a few years ago, it doesn't matter if you're a man and woman, LGBTQ, significantly older, rich or broke, willingly entering into the marriage, or at least 18--you're free to tie the knot. You can even marry younger in some states as long as you have your parents' consent.

In countries like Italy, Japan, Switzerland, and Greece, you can enter into a civil union, but same-sex couples remain unable to legally marry.

The Right To Name Your Baby Whatever You Want

We've all heard some names that made us raise an eyebrow or two. Autumn Winter, Dakota Sky, Richard Zucker, and any girl named after a popular stripper. In America, you've got the right and moral obligation to name your baby anything your heart desires and face no consequences for your lack of consideration--at least until the kids get picked on in school. Not all country's citizens enjoy such freedom, believe it or not! In Germany, Japan, Sweden, Norway, and Iceland you wouldn't have that freedom.

My Thoughts On Freedom

We enjoy many freedoms in America that are not afforded to people in other parts of the world. Some of them are shocking, some of them are no surprise. When we think about freedoms, even as countries and parts of the US are fearing lockdowns again amidst another Covid-19 surge, America is still the free nation that it once was. It may not always feel this way, but we're living in a world none of us imagined before the beginning of 2020. We may still own and possess firearms in our own homes, except for felons and known mentally ill patients. We can still go to McDonald's and eat whatever we want. Our movies aren't censored because of things like a silly same-sex kiss between two men. (Eternals Russia Release) And, we aren't forced into the military as children, as is the case with parts of Africa.

I can sit and write a story, essay, poem, article, or even humorous anecdote about something I've seen, learned, experienced, or dreamed up. I can then hit submit and share it with the masses on the internet, without it being screened by the government. Enjoy your freedoms, and remember, not everybody in this world enjoys the same level of freedom we do!

If you have stories to tell, are interested in writing or blogging, Vocal is currently running a special on memberships for new members. Membership also gives you the opportunity to compete for thousands of dollars in prizes. Clicking this link would give you access to the thousands of stories, benefits of the challenge opportunities, and if you join benefits me as well as it is an affiliate link through the Vocal + ambassador program. You may also click the link below.

More stories from Jason Ray Morton and writers in Motivation and other communities.