The Courtship of Ollie's Mother

by Christy Munson 2 months ago in fact or fiction 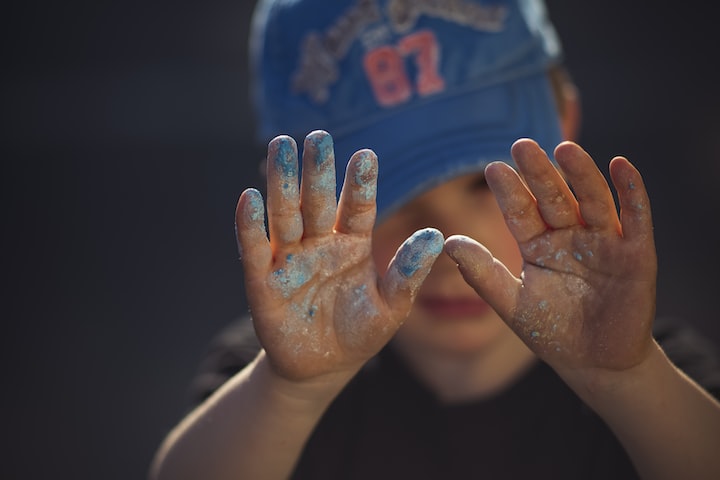 From Henry's expansive living room, Josephine spies Henry's sexy bare feet emerging at the bottom of perfectly worn black jeans. "I like the mess," he clanks another saucepan from the rack. The rest of Henry's delectable 6'2" frame is obscured behind stainless steel refrigerator doors. He's quite the artist. The Jackson Pollock of romantic dinner prep.

It’s a miracle, really. The ability to take on whatever shape is needed.

Henry arrives at Josephine's side. Unearthed from his cellar and cradled in his recently retired baller hands are two wine glasses and a bottle. He places his great triumph on the drink cart at her side.

The vintage she mentioned to Henry, once, more than nine years ago. Her great white whale. Beyond expensive. Unattainable. Unless, of course, you have money to burn.

He was every imperfection that girl craved. Witty, elusive, thoughtful, intelligent, distracted. Smokey cinnamon eyes that spoke in tongues. Hair, thickly dark and mirky as the North Sea. Musculature that gave her inner thighs thumb prints. Contusions from masterbation. The way he moved, and stood, and leaned and spoke her name. Even the rhythm of his breathing filled her lungs.

Henry had been receptive, however inconsistently, that grueling semester. They'd danced around their chemistry arbitrarily.

He was otherwise engaged.

That last night they'd stayed up alone together in the uni's library. An all-nighter, one last final. Sexual tension tickling like feathers. Cruel as complicit restraint. Tempting as leather.

"Taste me." Joey took her chance. He kissed her back. Hungrily. His lips, his tongue, sampling her skin, her open mouth. His eyes exposing his pleasure. His welcomed toxins, sinking in.

He stopped. Obviously, rock hard. That wasn't the problem.

Zelda and that ring were. And her father's contingent offer. There'd be no other chance for Henry to get drafted.

In 17 hours, Joey would be high, circling the cliffs above Scotland. Forever elsewhere, beyond his grasp.

"Why not come with?" Her eyes dripped promises, subtle as clover-spun honey.

Henry swallowed whole. "I am so sorry."

And now, almost a decade without so much as how you doing on social media. And that son of a bitch.

Joey shifts her slight weight, unaccustomed to six-inch stilettos after all the marathons and cross-fit mudders. And now, now, he shows up with that Lamborghini smile and those intoxicating eyes with his little man's always welcome. And Domaine?

With the stroke of a pen. Everything had changed.

"I recall what's important." Henry winks, his wide receiver fingers finding Joey's exposed skin in contact with his own.

A concrete wall. He fumbles his hands into his pockets.

"Am I supposed to be impressed?" Joey searches for signs of lost Marcella. Pressure drops, an anvil pulling G's.

Her legs disentangle, and she's gathering Ollie's things. "We should go."

“Save the bottle?" For someone else. It scarcely registers: The cork has left its bottle. Henry's let it breathe.

Joey's wristwatch gave up the ghost three months ago, like a psychic. And now its watch face keeps a different measurement of time. So she fingers her cell phone buried inside her navy clutch. A gut check more than observation of the hour.

“Please.” Henry turns down the music. “Stay.” He thinks of Ollie’s little ears. “You’re here.” The 1990's are louder than he imagined. He retrieves his hands to take up hers.

“The bacon wrapped figs will keep." He sets aside her iPhone. "Skirt steak's marinating.” He seeks her gaze. "Butternut squash soup's coming together nicely." He kisses her manicured fingertips, one by one. "Dessert can wait." He strokes her wrists. "I'm asking." He nuzzles her palm with his jaw. "Please." Her hand finds pleasure in his scruffy beard. "Stay."

Henry's lips are made for this. It's not a fair fight.

He presents her with two glasses, hers and his. She drops Ollie's assorted playthings at Henry's feet.

She holds her glass aloft, and he moves to fill the void. His proximity and his hunger give her goosebumps.

Not in front of Ollie. "Half an hour. Then it's bedtime, mister--"

"You think you've thought of everything." Joey brings a one-two punch.

Returning her soulful eyes to her charge, she sees Ollie patting a yawning lion in Play-Doh blue. She sips the magic potion for herself. "Not bad." His world class wine is wasted on her. Because of John.

"Not bad?" The wine's orgasmic. "Your white whale? You telling me so much has changed?"

"You have no idea." Joey excuses herself. Just my circumstances. She sells the broad strokes to his mirror.

When Joey returns to his expansive living room, Mr. Gigglypants has the floor. A command performance.

Henry melts, a snowman knelt before her glorious bonfire.

With great fanfare Henry scoops up little Ollie in his arms and flies him around the room, a Concorde. They duck and weave and loop-d-loop, breaking the speed of sound.

"You like coloring?" Henry surrenders Ollie atop a stack of hard-bound books and one fluffy faux fur blanket for his comfort.

Josephine leans in, prepared to chime in. Picasso with with acrylics, she has ideas. But Henry cuts her off, denied. Flirting like a scoundrel.

"A lot a lot." Ollie throws his arms around Henry's shoulders and climbs his back, his noggin a bobble head. He can't stop smiling.

Henry sprinkles markers across the counter. "Work your magic."

While Ollie colors, Henry cooks and dances. That man is vibing. Effortless as Channing Tatum. Sautéing a glorious mess the size of Texas.

What am I doing?

Joey's head spins. It's all too much. She think of John, and his last wishes.

Henry. With his sultry sauces, and artful hands, and insanely sexy lips. His luscious voice. His foodie knowledge. His sexy brain. And those eyes--good god, those eyes.

But life is Ollie.

No matter how sinful on her tongue, she has out grown pinot noir.

In the years since she last saw Henry, she's discovered her own palette. And her drink is a merlot, no matter the cost.

Her choice is Henry. The man himself is her perfect indefatigable merlot.

He thrives in cold soil, drips perfect earthiness and presence. Deep and bold and wildly complex. He's every single taste she ever wanted.

He can't possibly want an insta-family.

She never should have called his agent to offer congratulations on his retirement. Five months ago.

And now he's alighting in her eyes and melting silky on her tongue, and she can’t ignore it. Henry whets more than her appetites. He is the one.

But it's too late. Her life is Ollie.

She signed the papers. The courts ruled. Decision’s final. John's son is her son now. The only family Ollie has left. He's her responsibility, and that's forever.

And yet, even now, Joey's boxing like a welterweight, unrestrained, not clinging to the ropes. She's all in. Fighting for the life she wants. With Ollie and Henry.

Whenever the sitter shows, trusting Marcella's fine, it'll be a sign. Joey will come clean. She'll ask Henry to decide. Should I stay or should I go now?

She fantasizes about whispering “sexy never smelled so good” and yielding her flesh into his, their bodies trembling. Instead, she checks on Ollie's artwork as Henry licks his fingers, tasting hope as much as spices in the air.

Joey is all Henry thinks about. Since the stacks. All those years ago. Her touch, her kiss, her taste, her scent. That goofy way she elongates her O's. How she explains little known facts like tiny treasures. The way she celebrates her scars. No victim's here parade.

He dreams it. Their tongues entwined, sips of merlot shared and sweetly swallowed. Her honey eyes inviting him to invite her in.

He's all in, if she will have him.

He made the wrong choice once. Not even three Super Bowl rings can expunge that gnawing feeling.

He seeks her out. His hands taking her hips. They move together. Very slowly. Despacito. A marathon of moves and countermoves.

Joey teases, pulls away. Folds bare arms across her chilly breasts and tugs lightly at her jade pashmina. Self preservation. She went sleeveless despite the promise of a downpour after dark.

It happened so fast. The night Oliver's father drove into the flash flood. In an instant, John and Cassandra lost their argument to a hauling semi overloaded with lumber west of Boulder.

Joey lost her only sibling.

Henry smiles. “Ollie’s the best.” He collects the purple marker that sent him careening into the island. He reads Joey's body language, and gives her room. “Find me when you’re ready?”

Hearing Marcella on the landing, folding her umbrella and shaking off the cold, Ollie issues his pout. I'm not leaving.

And Joey has her answer. She'll tell Henry everything. Tonight.

“Don’t give me that look, mister.” Ollie's adorable if predictable.

Joey scoops up the boy like weekday laundry in her arms, rocking him so gently it hurts.

“Can you say thank-you to Mr. Henry for the coloring books?”

Marcella gathers kid stuff in her octopus arms. A thousand silent pardons are met with incredibly relieved you're fine. Marcella's explanations can wait.

Joey has her own dangerous ground to walk.

"Be good for Miss Marcella."

Joey issues silent prayers, watching her son get loaded into his car seat in the rain. A shiver gallops up her spine.

And when the last of Marcella's Jeep has passed from view, Joey turns her anxious eyes to Henry and his catastrophic mess of a kitchen.

Walking slowly toward him, she takes a final, sizable mouthful of his heavenly '99 vintage, and pours what's left inside her glass into his sink.

"From here on out," she takes his face into her hands, "I choose merlot."

See all posts by Christy Munson →