by L.C. Schäfer 9 months ago in friendship 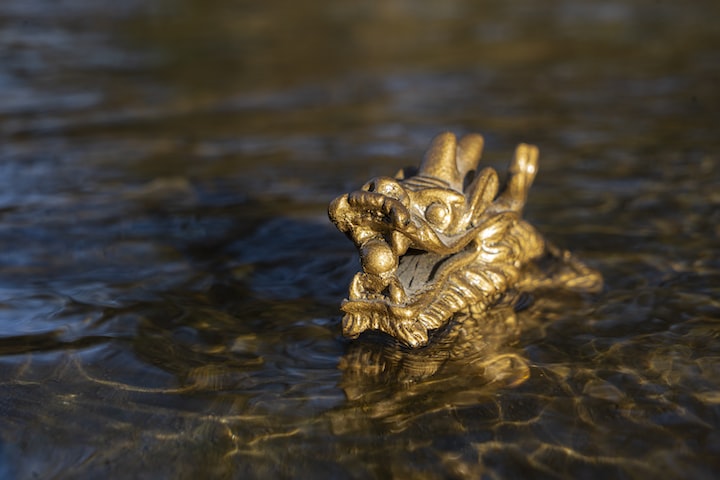 Photo by Ryan Moulton on Unsplash

The slam of the front door echoed through the flat, and the walls shook. Matt had turned over the whole place, but whatever he was looking for, he hadn’t found it.

My heart hammered. He’d never acted like that - not even during that last awful row when I'd told him it was over and thrown him out.

What on earth had he been looking for?

It took a moment to register that my phone was ringing and that it wasn't him. My brain was a fragmented jigsaw, and I couldn’t bully the pieces to come together and properly process anything. I goggled at the name on the screen.

Surely labour couldn’t be starting now? It's too early!

I answered in a rush.

“Lindsey? Is it starting?”

I saw, in my mind’s eye, Lindsey slipping her feet into her shoes, coat unable to fasten over her belly, and hurrying out to the car in the dark.

“I think I'm …” I was going to say, "fine", but that didn’t quite taste true. How to articulate the havoc he'd wreaked, the breath of panic he'd brought with him?

“Get the kettle on.”

I heard the engine turn over before the line died.

Numbly, I picked her way through the debris to the kitchen. Making a cup of tea was strangely soothing. Is that why we do it?

Footsteps on the stairs made me jump. Knowing who it was likely to be didn't keep my heart from thudding; Lindsey letting herself in a thousand times before didn't loosen my death grip on the teaspoon.

She stared wide-eyed at the chaos, looking just as I'd pictured her, in lounge pants and too-small coat.

"He really turned the place over, huh." Excitement flashed in her eyes. “So... Did he find it?”

That was the thing about Lindsey. She was good in a crisis, but she also loved a crisis. She fed off it. She was one of those people who always knew what to do. But she was also someone who relished drama, liked to be in the thick of things, enjoyed saying afterwards, I was there.

Exasperation made my voice shrill,

The jigsaw pieces coalesced for a moment into a single shimmering thought: I might be sitting on nineteen million pounds.

“No, it can’t be - he looked everywhere… ” I gestured vaguely. Unfamiliar anger and spite coiled up and shot out of my mouth like a chameleon's tongue. "Maybe it's at his girlfriend's house."

Lindsey focused on the practical like she always did, turning the subject away like an experienced rider turns a stubborn horse. "Have you called the police? They'll give you an incident number, for the insurance.”

Relief overlaid the adrenalin still buzzing through me. I'd felt like to drown, but a friend had thrown a life raft, and had a steady hand on the rope guiding me to calm shores.

The nineteen million slid back under the surface like a water demon and lurked there, pulsing insistently, waiting for its moment.

I unlocked my phone, ignored the notifications begging for a chunk of meat from the rumour mill, and looked up the number to report the incident.

It was tricky. Words had been carefully penned in, but now must come out - yet they were hesitant. My voice kept cracking, and sometimes failed me. "Nineteen million pounds" demurred skittishly at the back of the enclosure, some instinct causing them to baldly refuse freedom. Lindsey made a third mug of tea and insisted on cooking supper.

She moved around the kitchen fast given the size of her bump, which contrasted with the slimness of her legs and feet. She should've looked like she were going to topple over, yet she looked elegant rather than ungainly. Her mussed hair and thrown together appearance was at odds with her capable aura. It was like she had four pairs of hands, the eggs perfectly scrambled at just the moment the toast was buttered, and just as quickly, everything cleared away, not a crumb left behind.

Linsey was a mirror opposite of me: tall and fair where I'm compact and dark; a whirl of activity to my mousey quiet introspection. Sometimes, I felt like her shadow. Always, Lindsey had been the popular one - always quick to say something funny or interesting. She lived life at double speed to everyone else, and all seemed drawn to her vitality.

The night settled into a dull blur of police uniforms, careful questions and intolerable amounts of tea.

Under it all, the money-scaled water demon undulated patiently.

Linsey begged me to sleep elsewhere tonight, but I wanted the familiarity of my own bed. I agreed that Chris, her brother, could sleep on my sofa so I wouldn’t be alone.

As I went to wash away some of the day's stresses under a hot shower, I saw Lindsey by the dresser, speaking to Chris with her phone clamped between her ear and shoulder, tidying away clothing that had been displaced in Matt's frenetic searching. When I looked for pyjamas, each drawer was ordered neatly - every item removed, deftly folded and slotted back in again. Bedding had been brought from the airing cupboard and arranged over sofa cushions on the floor. Hot chocolate waited by my bed. Gratitude washed over me. Lindsey thought of everything.

At last Chris arrived and she was going. Oddly (this made me feel horribly ungrateful) it was a relief to be seeing the back her. Lindsey helped so much… yet the mere sight of her was exhausting. Chris' presence was different - although he's much taller and broader than his sister, his motions are steady and predictable, rather than energetic and quick. He moves the way you might around a wild pony. It's almost as if, his size being alarming, he compensates by moving softly.

I sank into my soft nest of duvets and pillows and succumbed to a fitful sleep. Dreams plagued me, of Matt - refusing to leave, rampaging around my home like a caged bull, rage making him grow huge, his frustration bouncing off the walls as all my belongings shattered and scattered into darkness.

Total darkness. Was I asleep or awake? Were my eyes closed? Was that why I couldn't see my hand in front of my face? Could I hear creaking and shuffling, like footsteps? Sleep pulled me under again, but the dreams continued... Matt yelling, doors slamming, walls shaking, and weaving through it all, furtive footsteps.

Weak sunshine probed my grainy eyes next morning, a vacuum cleaner whined and there was smell of bacon, which made me feel nauseated. I haven't eaten it since I was nine.

Everything was much as it had been Before, only neater. Sheets stripped, sofa put back to rights, books stacked on shelves, lamp righted, and shards of glass and crockery cleared away. It looked like the furniture had been moved, and the vacuum cleaner had gone all the way to the skirting boards.

“Chris is cooking breakfast. Sorry, he didn’t know you were veggie. He went out for milk and bacon.” Lindsey looked sweaty and tired, one hand on the vacuum cleaner, the other running through her hair and making it stand on end.

I groped for adequate words of thanks. Lindsey breezed on, ticking off things that had been done that morning, "... Your boss isn’t expecting you in today, but you need to give them a ring... I’ve called a locksmith - the details are on the notepad in the kitchen... There’s homemade veggie lasagne in the fridge..." And then the door banged, her feet beat a rapid tattoo on the stairs, the faint thrum of the car engine - and she'd gone.

Sheets from the sofa were already in the washing machine, and there was a stack of clean laundry on the end of the kitchen table. Bags under Chris' bloodshot eyes suggested the sofa cushions had not been especially comfortable, and that his sister had arrived earlier than he'd have liked. But he poured coffee cheerfully, wearing an apron that had been hanging under the stairs, and smiling warmly.

My appetite hadn't returned, and the bacon smell was off-putting, but I liked Chris, I was grateful to him and didn't want him to think me rude. I nibbled tactfully.

He didn't stay long once the dishes were cleared, leaving me alone in the empty flat. A radio helped to banish the unnerving quiet, then I opened the windows and took the bin out, hoping that would get rid of the bacon smell. When I lifted the lid of the wheelie bin, I paused.

The half-forgotten water demon splashed a tentacle. Scales shimmered enticingly. My heart sounded very loud all of a sudden.

A glance told me that no neighbours were about, no curtains twitching. I grasped the bulging bin liner, swapped it for bacon-contaminated one and moved as nonchalantly as possible back indoors.

There was the sense of furtive adventure in the air, locking the doors and panning the slimy contents for treasure on the kitchen tiles.

It probably won't be here.

It was revolting, sifting through slimy banana skins, egg shells, teabags and yoghurt pots. My stomach turned, but I kept going. My heart lurched now and again at the sight of a scrap of paper, only to sink when I got a better look.

What's this? A small black diary. I flipped it open and flicked through it. I didn't recognise it, but I recognised Matt's handwriting.

I almost missed it. It had been placed on top of a small handwritten note and some old recipts, all folded together and tucked under the elastic at the back. A casual eye saw only a bundle of receipts. I felt like I was moving through treacle. I checked last night's numbers, stared at them for several seconds, looking from ticket to results and back again.

Shock coursed through my body.

Nineteen million! It's here, in my hands!

Briefly, I considered returning the ticket to its owner and almost laughed bitterly. The fiend that had driven Matt frenzied into my home gripped me in strong talons, and laughed too.

The almost-forgotten paper that was attached to it bore a carefully written love note.

The bottom dropped out of my stomach. I know that handwriting. It had graced birthday cards, notes at the back of the classroom, and was, right now, scrawled across a notepad on the sideboard. I put both examples on the floor and stared, eyes flicking from the hasty scribble to the lovingly penned script.

Was she the girlfriend?

Was her baby his?

Had she been going through this place with a fine tooth comb? It'd explain why she'd pushed me to leave last night, why she'd come so early today. She'd found a reason to go through the drawers, laundry basket and airing cupboard... Is that why she'd called Chris? Why he'd gone rummaging under the stairs? Had they been sneaking around in the night searching?

One winner. If I claimed it, would they guess it was me? What might they do?

Maybe I should pick a town at random, get on a train and claim the winnings there?

What if something happened to the ticket? My grip tightened on it with a wave of sudden empathy towards Matt.

Receive stories by L.C. Schäfer in your feed
L.C. Schäfer
Read next: Reads Must: A Little Life by Hanya Yanagihara