The Girl, The Penguin, and the Stranger

by WordSmithtress about a year ago in literature
Report Story

(not quite a romance) 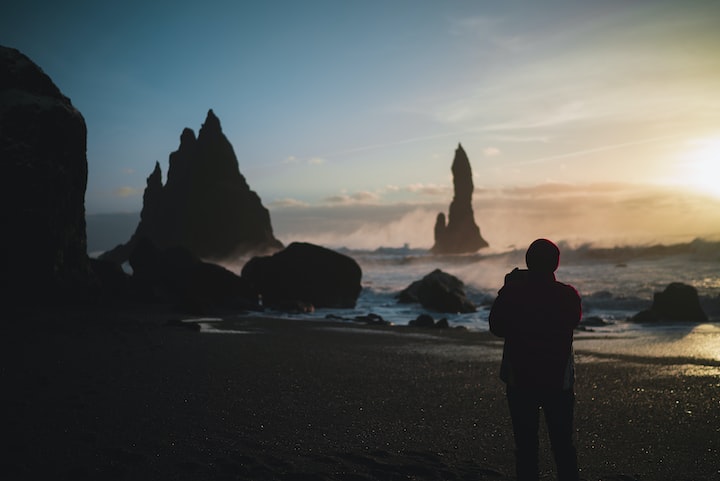 Photo by Juan Encalada on Unsplash

Coral set her bags down on the worn, salty gray planks of the fishing pier. Ships were docked up and down its length, but none of them looked like a ferry. She cursed her guidebook and the eagerness with which she’d made plans for this solo trip. This isn’t like you, she told herself. You aren’t adventurous. You aren’t the kind of woman who travels alone. You barely speak the language. Why go somewhere remote in a foreign country? What were you thinking?

What she’d been thinking was that she was fresh out of college, alone halfway around the world in a job she didn’t love, and she wanted to go somewhere she could get lost in nature without worrying about being robbed. So she booked a trip for herself. On a whim. Completely against her better judgement. Which she was now regretting.

She’d been here fifteen minutes and hadn’t seen a single boat come in. Only leave. What if she’d misunderstood the ferry schedule and missed it? Fernando, the bed-and-breakfast owner, had been clear that only one ferry a day came through. He must have sensed her anxiety through the email, because he added, “Don’t worry. You can always hire a fisherman to bring you to Praia das Pedras if something goes wrong.”

What if she took a fisherman’s boat and they took her to the wrong beach? What if they had to go out of their way and she didn’t have enough money to pay them for their trouble? No. She had to take the ferry. It would come. Coral squinted. There, at the horizon, a ship’s vague shape. Maybe it was her ferry. Coral adjusted her hat against the blazing sun and reached for a book. She’d calm her nerves by reading.

By the time the ferry arrived, a small crowd had gathered around her, and Coral was feeling less anxious. There was a guy wheeling a grocery cart with flats upon flats of eggs, leafy greens, and a few squawking chickens. A small group of elderly tourists, some tanned kids who had to be locals, and a good-looking young couple whose ease and laughter sparked a tiny flame of envy. Wouldn’t it be nice to be carefree? To enjoy the moment? To not live in perpetual worry you were in the way? When the girl looked her way and smiled, Coral was taken aback. Usually, she blended into the background. Or so she thought. The girl motioned for her to come near.

Coral gave a shy smile. “Sorry, I only speak English.”

“Cool. Would you mind watching our bags for a moment?”

Coral nodded. The pair went off down the dock, where they disappeared onto a fishing boat and reappeared a few minutes later.

“Thanks so much,” the girl said, sitting down on the bench next to Coral. “I’m Andreia. This is Samuel.”

Samuel was gorgeous. Coral tried not to stare. “Call me Sam,” he said. Both of them had excellent English.

“We’re actually both pretty fluent,” Andreia explained. “I work in tourism. Sam’s a graduate student. We’re headed to the island for my uncle Roberto’s annual mussel party. Sam will help with the harvest today at Praia das Pedras.”

“Perfect!” the two said, almost in unison. “We’re going to take a fishing boat instead of the ferry. It’ll be faster. We’re late...and the marine biologist doesn’t like to be kept waiting. Want to join us?”

Coral shook her head. “It’s fine. I brought a book.”

“Be careful on the ferry,” said Sam with a serious expression.

“If you don’t pick the right seat, you could get egged,” said Sam, motioning to the grocery cart. “And the offer wasn’t just for the boat. If you want mussels, hit up the little house on the beach tonight. We’d love the extra company.” He flexed, goofily, and Andreia rolled her eyes.

“Muscles. Mussels. So ridiculous. Ignore him. The offer’s good though, are you sure you don’t want to come?”

Coral gave a little laugh. “I’ll take my chances with the ferry. Thanks for the offer, though.”

As the two took their things and jumped on the fishing boat, Coral pushed back a strange feeling. Joining them would be silly. Total strangers...It’s sensible to take the ferry. Nothing to regret later, she assured herself.

When the ferry announced its arrival at Praia das Pedras, Coral was first to exit. She recognized her host, Fernando, from the picture online. He had a small crate of eggs and some vegetables on one hip and was waving in her direction. Sam stood beside him, a mischievous grin splashed across his face.

Fernando held out a hand. “My guest! You made it! Welcome to Praia das Pedras.” He offered to grab her bags.

“You’ve got the groceries, Fernando,” Coral pointed out. “I’ll manage my bag.”

“How was the slow boat?” asked Sam. “Andreia sent me down to remind you we’re doing mussels at her uncle Roberto’s tonight.” He motioned to the little house in the middle of the beach. “You coming, Nando?”

Nando shook his head. “Too much to do at the bed and breakfast. But if Miss Coral wants to go, I’ll make sure she’s set up. You or Andreia will walk her back?”

Sam nodded. “Absolutely. No jungle-wandering for our new guest. In fact,” he said, wrenching Coral’s bag up and over his shoulder, “I’ll walk her up there too.”

Embarrassed that Sam was carrying her suitcase, Coral tried to protest, but he was insistent on helping out. She walked behind him, trudging through the sand as it slipped under the sole of her flip-flops. The ferry pulled away as they crossed the beach. She felt a thread of relief. For better or for worse, she was here now. The ferry wouldn’t reappear until this same time tomorrow. She’d made it. And maybe, just maybe, made some friends?

The beach ended suddenly, and a narrow foot trail snaked through the trees.

“Keep your eyes on the path,” Sam called over his shoulder. “Those roots sneak up on you.” Coral wondered what else might sneak up on her. Spiders? Poisonous snakes? There wasn’t a hospital on the island, she knew that much. What if she were allergic to something in the jungle? Coral shivered, and picked up her pace.

At the top of the hill, a small complex of colorful houses nestled among openings in the trees. “Green Room,” Nando called to Sam. He led Coral to a brightly painted square of a house and set down her suitcase.

“Thank you so much,” Coral said. “That was...really kind of you.” She almost leaned forward to hug him before stopping herself. Total stranger, remember?

“No problem,” he said, scuffing his feet and staring at her with eyes the color of molten caramel.

Coral wondered if she’d said something to embarrass him. No, stupid, she thought. He needs a tip. Of course he was looking to make a little extra money. No stranger would be doing this because he liked you, she chided. Coral pulled out a few bills. “For your trouble.”

Sam pushed her hands away. “Hey! No cash accepted. You want to repay me, show up tonight. I’d love to see you there.” He winked, then turned on his heel and was gone.

A banana plant’s green bunches swayed in the wind outside her window. Coral set her things down. What was happening? Instead of a quiet weekend, she was consumed with more thoughts than she knew what to do with. What she needed was a place to clear her head.

Nando gave her directions to a hidden beach. “Go right down the path. You can’t miss it; it’s full of pedras.”

Coral soon found herself ankle deep in lapping water. Boulders, like giants sleeping in the shallows, created a tiny cove protecting the beach. Her eyes flitted to the empty horizon.

She blinked. She rubbed her eyes. What was that bobbing near the shore? Coral took a few steps closer. It wiggled. A...penguin? She laughed out loud. “What are you doing out there, Mister Penguin? Look at us, two immigrants, all alone on a deserted beach...”

The bird didn’t seem afraid of her. It paddled in small circles just out of reach. What if there was something wrong? Maybe it was injured. Her mind flitted back to the conversation with Andreia on the pier.

Worried, she made her way down the path to the main beach. A little dinghy bobbed among floats a little ways out. One of the occupants waved.

She waved back and watched as they pulled something into the boat, then started the puttering engine. As the boat approached, Coral recognized Sam.

“Actually, I came for a marine biologist. I saw a penguin...”

“No, a penguin.” She made a little waddle motion with her hands a feet. “A bird?”

He laughed. “Mango. The penguin. Is he okay? He’s a legend around here. I’ll tell you the story, but first,” Sam handed her a bag full of mussels, “help me with these, would you?”

Seaweed and saltwater dripped down her legs. “Deal.”

They carried the bags up to the little house on the beach. “...and so he just keeps coming back here. I think Mango’s hacked his instincts. Chosen something different. He thinks this island is his home.”

Andreia poked her head out of the front door. “I thought I heard voices. You showed up just in time!” She handed Coral something hot, wrapped in a napkin. “Try it. Seafood pastel. So good. And you,” she jabbed Sam, “get the rest of those mussels inside so someone can start cooking them.”

When Sam was gone, Andreia nudged Coral. “He’s cute right? And into you.” She looped her arm in Coral’s and pulled her inside.

“Me and Sam? No. He’s my cousin. And one hundred percent single.” Andreia pushed Coral into a comfortable chair in front of the television and disappeared into the kitchen. “Sit. Wait. Good things will happen.”

Coral watched as the others cleaned mussels and rolled dough and fried things through the opening into the kitchen. Once or twice, Sam caught her eye and winked. Feeling useless and shy, Coral slipped outside to sit on the sand. Most of her life, she’d felt out of place, the foreign observer, the ship on the horizon, the wallflower. Even now, she could hear laughter and talking, music starting up, the sounds of other peoples’ lives. And here she was, intruding on someone else’s family, someone else’s dinner. You should go, the voice inside her head said. They’re just being nice, but you are seriously overstaying your welcome.

Sam came outside and stood beside her. He was so close she could feel the heat from his skin. He’d changed into a clean shirt, his hair no longer mussed by the sun and waves.

“Why would you be a bother?” He reached for her hand to pull her up, out of the sand. Instead, Coral lost her balance and fell into his arms.

“Don’t be.” His fingertips brushed sand off her arm. “I don’t mind.”

This is where Coral felt the familiar tug. To walk away, to return to her lonely, risk-averse life, the dinner alone in the middle of the jungle. She almost always took the path that looked the safest, the least interesting. She looked out at the dark waves, wondering how Mango the penguin decided to resist his instincts in favor of something new. Perhaps she could learn to let go as well. Maybe all it took was one small choice. Coral took a deep breath.

More stories from WordSmithtress and writers in Humans and other communities.