The elusive spirit of the wind

by Kelli Sheckler-Amsden 3 months ago in family

a 6 year old's imaginative version of a barn owl experience 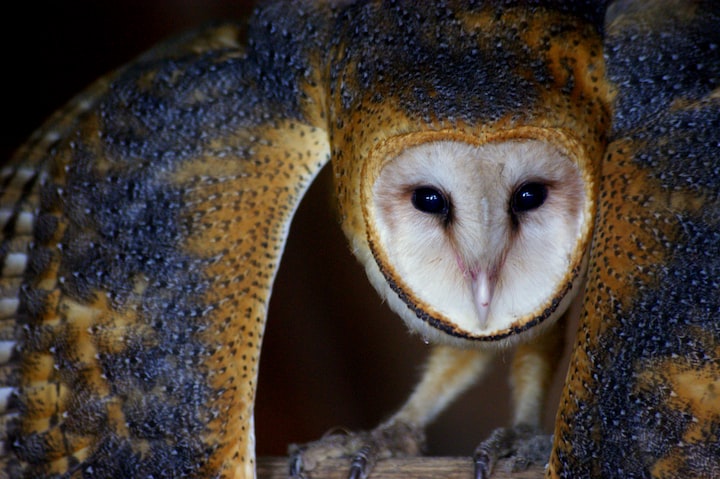 It seems odd to be telling this story at this point in my life, I suppose it’s somehow irrelevant now. But maybe, in retelling and reliving the moments here in this safe place, on paper, it may shed some light as to the secret we have not talked about since that blustery day all those years ago .

Let’s see….I guess it was about 50 years ago now. Man does the time fly, funny how memories are still as vivid as the moment they happened. Anyway, 50 years ago, I was about 6. My twin brother, Kirk and I had been playing in the yard next to our barn that had been blown down by a storm. We had been told and warned several times to stay away from the barn, because it was unsafe and could potentially collapse at any moment, killing us as easily as butter falls off of a hot knife, or a fish flopping helplessly out of water longing to slip back into the deep, or a butterfly floating peacefully in the air as it will, into a windshield. At least that is the way our mother told it, with her wide eyes and the highest pitch voice I believe I have ever heard. Dogs responded and sat in attention awaiting any command she might bellow. And like good kids we did…for a moment.

There is something mysterious and alluring about a large barn that had stood so long, majestically announcing to all the neighborhood of its strength and fortitudinous. One only needed to look to appreciate its beauty. But in the passing years, had been weathered and aged so much that the slightest of windstorms could cause its tall peaks and sturdy beams to bend to it's will and magically touch the ground. Almost creating the perfect stairway to heaven. A mystical pathway to the tops of the trees, almost touching the sky, alluring us with the hay trolleys waving and dangling their ropes like an abandoned pirate ships. Calling us to come aboard and set sail to worlds unknown, at least worlds where moms aren’t yelling at you to be careful, don’t touch that, watch out!!! Such are warnings for babies and weaklings who needed their mommies to hold them and definitely not for adventurers and brave hearts like us, looking to capture the great and elusive spirit of the wind and claim its powers as our own!!

We knew that there was such a creature, because at dusk, just before the sun disappeared in the sky and the shadows came around and enveloped the barn and the entire back yard became a sea of darkness. Just before the security light, that dad put up to keep our sibling’s friends from t-ping us after dark, came on. We would hear it, crying in the distance. From the deepest darkest corner of the barn, where even the spiders avoided crawling and making their webs. A sound so low and deep and intimidating, only the bravest of warriors could hear it. To the warriors it was a challenge, an elaborate game of hide and seek or catch me if you can. And we were about to go on the grandest adventure we had ever been on. Well, right after our nap. Mom!!!

Finally released and far from the gaze of the all-knowing, all seeing eye of our mother. Kirk and I began the tedious and dangerous climb to the peak of the barn. The wind had twisted the beam in such a way that the small window, where we used to watch the animals eat, had become a broad and heaving passageway to the greatest secret ever kept. Although we had been warned and threatened not to, we knew that it was something we had to do. Like a rite of passage, a pledge was made, and a plan was forged. As fierce warriors we had to know what secrets hid behind the walls of this now dilapidated old structure that brought fear into the hearts of all the mothers in our neighborhood. And with this call to arms, we accepted, and our long awaited plans were suddenly now a fluid motion. We knew there would be many challenges, but we were ready to take them all on. The next few nights we would prepare

We took a few items that would be useful in our journey, we packed band aids and some cream in case of cuts, and some RC cola and bologna in case we got hungry, it is important as an adventurer to always be prepared, Kirk brought along his trusty cracker jack compass . We brought some rope and a bag to collect treasures we might find along the way and a notebook and pencil in case we needed to document our findings and draw a map so we could remember where we were and wouldn’t get lost.

So there we were, facing our fears and standing directly in front of the scariest corner of the barn. It was even darker and narrower since that wall was gone from the storm and it’s roof was mangled and twisted like a wadded piece of paper, and shoved deep in the ground. But we were brave, we didn’t move a muscle. We didn’t even flinch when we got close enough to hear the sound of the elusive spirit of the wind. At first, we weren’t sure what we heard. The wind outside was blowing so hard and the tree limbs were scraping and clawing at the siding of the barn, so we were unaware that the scratchy, low moaning sounds were coming from the corner that our faces were just inches in front of.

All of a sudden there was movement, a slight flash of light and something rushed by quickly, swiftly yet gently brushing our faces. We fell back in all the commotion onto a bail of hay, where we were now nose to nose with the sound from the corner. As we gained our composure and looked closer, we could see the creature. It’s face was snowy white, and it's eyes glowed like fire, we were sure for a moment that it turned it’s head all the way around, like a spinning top. We were convinced it was sizing us up for a tasty meal. Then, like a winged ghost it was gone. A sound of flutter and puffs of wind, and it was just gone! We could hear it calling as it disappeared from our sight, "hoot, hoot", as if it was congratulating us for finding him and surviving our brush with most certain death! Or, at least that’s the way mom would tell it anyway.

If you like what you read, feel free to leave a tip, I would love some feedback

See all posts by Kelli Sheckler-Amsden →