You get nothing, you lose. Good day, sir. 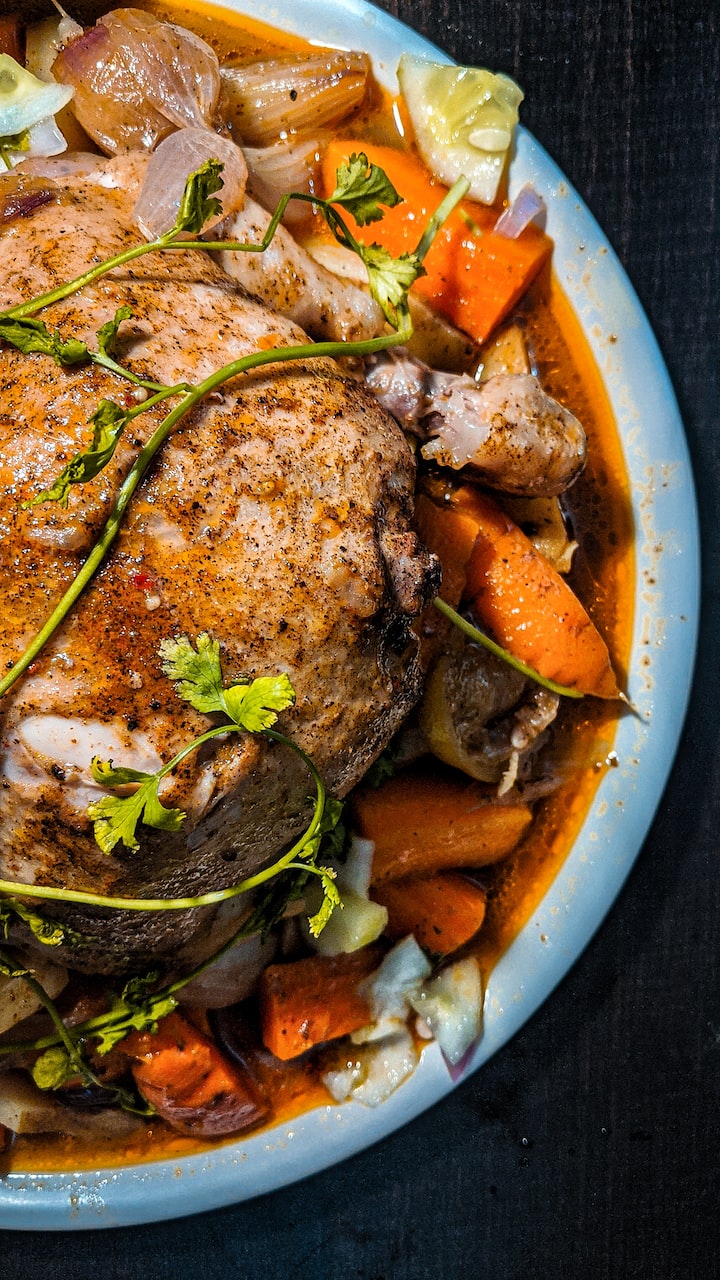 Photo by Faris Mohammed on Unsplash

My brother is the roast master of the family. Roast pork, roast chicken, roast lamb - you name it, he'll roast it. For any major - or minor - family gathering, my brother is designated as head cook, a position that he does not take lightly. Wearing an apron like a badge of honour and whipping the signature tea towel of the experienced home-cook over his shoulder, he proudly struts around the kitchen, talking non-stop at the rate of easily a mile a minute. Every year for the holidays, he pain-stakingly prepares a roast that makes my mouth water as I write this. The roast meal that was cooked on the night in question was roast pork and it glistened as my brother pulled it from the oven and placed it on the bench. He grinned ear to ear like he had won a prize as everyone congratulated him.

My other brother, the above brothers' twin, is the master eater of the family. He is built like a twig. Every bone in his body sticks from him as if it is trying to escape through his skin. And yet, every year he piles his plate high, to the point of ridiculousness, the sides overflowing and the top teetering as he makes his way back to the table, ready to eat. Not to mention that this trip back and forth, balancing the unsteady pile of food, often happens maybe three, four, five times in a sitting and despite the banquet fit for a king, there are rarely any leftovers.

The other characters that are pertinent to this story (besides Thing 1 and Thing 2, as they will respectively be called), are my grandmother, my aunt, my father and my grandfather. It is important to note that my father, grandfather and Thing 1 are entirely the same person when it comes to personality - aside from Thing 1's incessant talking - for which my father and grandfather love to tease him about endlessly. Essentially, while Thing 1 roasts the pork, they roast him.

My grandmother is a calm soul who exists in the world of happy holidays and families and only becomes cross when the roasting burns people a bit too much. My aunt, on the other hand, who is a fantastically lively human-being, encourages all gossip and roasting lovingly from the sidelines with a cheeky smile.

Of course, the final character that you should know about is myself. I arrived to the family dinner this time, dressed to the nines in reindeer antlers and candy-cane socks, makeup slathered on my face. It was an attempt to make my insides feel more festive - an attempt which had only furthered my scrooge-like disdain for the holiday spirit. But the smell of roast pork - and, more importantly, crackling - instantly distracted me from the general gloom of the season.

My aunt, who can read a room faster than anyone I have ever met, sidled up to me, her eyes also locked in on the pork as Thing 1 separated the crackling from the meat.

"Mmmm," she hummed, practically licking her lips like the cartoon cat that's always after Tweety Bird. "That crackling looks good."

We watched together, in raptures, as the crackling was cut up into manageable pieces. Then Thing 1 moved on to the meat and sliced neatly, even as he continued to talk at light speed, bowling over the wise-cracks my grandfather was attempting. My grandfather, scotch in hand and his Scottish accent becoming thicker the more he drank, had started to become more opinionated and more forceful. Opinions that Thing 1 was now disagreeing with.

As the disagreement escalated, my aunt and I exchanged glances, understanding flashing through us as we faked conversation. When Thing 1 moved again, setting the crackling to the side and focussing more intently on the conversation, even as he readied to take out roast veggies from the oven, my aunt gave me the signal.

We moved as one. My aunt ducked past my grandfather and distracted my father from my movements towards the crackling. I distracted Thing 2 from where he was already serving himself portions of sausages and sweet potato bake by involving him - for no real reason - in the ever-present roasting that my grandfather and father had again commenced. My grandmother, in all her sweetness, became unwittingly involved in the heist when she further distracted the whole family by admonishing everyone for their teasing and that was the moment I reached out and stole two pieces of cracking from the plate and slipped one secretly into my aunt's hand as I passed.

The turmoil of the brief argument wasn't enough, so again my aunt prodded and again the rooms' volume rose, primarily elevated by Thing 1 and his own opinions this time. All opinions that my father and grandfather both disagreed with whole-heartedly. My aunt reached for the crackling this time and I watched with bated breath as her hand hesitated near the plate.

She snagged two more pieces and stopped by the fridge to refill her drink and shove one piece of crackling into her mouth discreetly on her way to deposit the other piece in the hand I held out behind my back. Success!

We did this a few more times, each trying to distract the others with either meaningless gossip or an opinion that will incite an argument among our three main players. Somewhere along the line, Thing 2 discovered us and became part of our schemes, sliding discreet pieces into our palms as well, his cheeks already bulging. We also bribed my grandmother into silence and were almost outed when my young cousin who, until this point in my story, was quietly sat in the corner on his iPad and too overstimulated to notice what was happening. He, too, was bribed with a piece of crackling.

Hiding the fact that we were already eating was the hardest part. Unexpectedly, after a rather large piece of crackling was slid into my hand by Thing 2, my grandfather began asking me about my job prospects and I was forced to hold on to the greasy morsel behind my back as I tried to explain to him how I still wasn't working in my dream career, even after four and a half years of studying and working fulltime for a further year. I had received two more pieces to that same hand before my grandmother took the bribe and began fussing over the dishes not being clean. My grandfather quickly jumped to action, "They don't need to be cleaned in the sink if you're putting them in the dishwasher straight after, you just rinse 'em, love!" He gave me a look as he went off for a refill and my grandmother gave me an indulgent smile. I ate the crackling in three bites.

Finally, the veggies, which Thing 1 was having a hard time focussing on, were done to a good enough standard. It was then that everyone besides Thing 1 stiffened, realising just how much crackling had been devoured. The room took on a stillness that had been completely lacking from the night up until this moment.

When Thing 1 turned around and paused, setting the roast veggies down next to the half-empty plate of pork crackling, the room held its breath. His eyes didn't leave the plate as he leaned over it and asked, "Alright, who's been eating this?"

Sheepishly, my aunt, myself and Thing 2 raised our hands, swiftly followed by my grandmother and cousin... and my father and grandfather. When they had snuck their own pieces from the plate, I have no idea. My aunt looked at me and mouthed, "what?" as we lowered our hands, clearly just as surprised as me. My father winked at me, the cheeky half-smile mirrored in almost everyone's expressions.

Thing 1 slapped his tea towel against the bench, swearing quietly and making us all jump. Then he picked up the crackling plate and started to serve himself meat and veggies directly onto the plate. "Right, the rest is mine now. Eat up, you guys," he called out. We all scrambled for the sweet potato bake the moment he stepped away from the bench, fighting again for the best servings.

This year, we're holiday hiesting the crackling again, but, unbeknownst to Thing 1, we have separated into two tactical units. The first is manned by my aunt and Thing 2, led by myself. The second is manned by my grandfather and my father. They don't stand a chance. This year, the aim of the game is to both not get caught and to capture as much of the crackling as possible, while the other team is out to get us. None of this has been verbally agreed upon, but we could see it in our smiles that day and the planning has already begun.

More stories from Jaimie and writers in Humans and other communities.