For the Camp Challenge 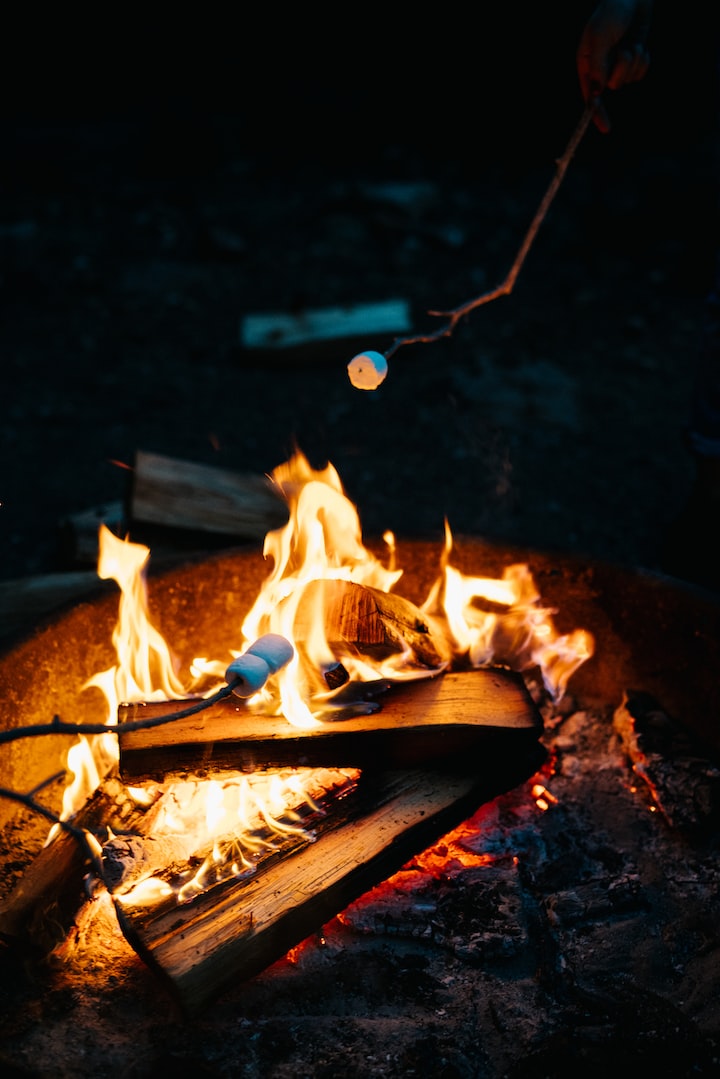 Photo by Sidney Pearce on Unsplash

Smoke fills the air. It seems to follow you, even as you move to escape it. You cough and rub your eyes, feeling the sting of the residue from the burning wood. The smell is actually wonderful, all pine and that unidentifiable snap-crackle of summer nights. It’s not so enjoyable, though, when it’s making your eyes run and you can’t even wipe the tears away because of the long, thin piece of metal in your hand.

“Move,” your mom laughs, indicating a camp chair nearer to her. “The smoke isn’t so bad over here.” You huff out a frustrated breath as you come closer to her. You’ve been moving, and it’s like the smoke from the fire just follows you as you shift around the big cement firepit. The marshmallow on the end of your roasting stick hasn’t even begun to warm yet. You’ve been too busy coughing to toast it.

“Obviously, this is better,” your brother says, holding up a flaming mallow. “It’s faster!” You crinkle up your face as he blows out the sugary bomb and walks over to your mom, your cousin (who has also burned her own marshmallow,) following close behind him. Their charred sweets get squished between graham crackers that your mom has already prepared with a slab of chocolate and a smear of peanut butter.

“Relax,” your dad says, crouching down next to you. “This is the right way to roast a marshmallow, and we know it.” He smiles at you, and you grin back, happy to have a companion who gets it. He shows you where to put your stick, over the glowing coals at the edge instead of near the shoots of fire in the middle. His roaster has two marshmallows on it, one for him and one for mom. She knows how a proper marshmallow is cooked. You stay next to him, trying to be as patient as he is, turning your stick soooooo slowly. There’s noise all around you. Your cousin asks if anyone wants her roasting stick, and an uncle stands up to take it. Your aunts laugh loudly, and you look away for just a moment. You give a groan of frustration; while dad's marshmallows are slowly turning a lovely golden color, yours is only sort of puffing up at the end. To make matters worse, it is beginning to droop. You know it's only a matter of time before it falls straight onto the coals. You stick your tongue out between your lips, eyes focused on the toasting blob that is barely starting to gain some good color. You've got to keep it over the coals for as long as possible, get it as close to perfect as you can.

Eventually, at the last possible second, you swing your roasting stick away from the fire, drawing some chastisement from a nearby uncle, who tells you to "be careful with that hot metal!" You shout an apology over your shoulder while you rush toward your mom, who understands the urgency of the situation. She has a set of graham crackers all ready for you, the chocolate pieces just waiting to be melted. You plop the marshmallow on top of the chocolate just before it can ooze right off the stick, and mom sweeps the rest off with the top cracker, squishing it all down so the gooey insides come outside the edges of the sandwich. She appreciates a well-roasted marshmallow when she sees one, and she tells you so. You smile with pride for your creation, then you take it and plop into a camp chair between where she is standing and where your dad is crouching.

Sweetness fills your mouth as you lick some of the oozing white substance off the edge, feeling some of it stick to your face and knowing that you'll have to wash it all off later. For now, though, it doesn't matter. For now, you take another bite, chewing slowly and letting the flavors of graham cracker, chocolate, and marshmallow fill your mouth. You listen, letting the conversations and laughter of family, the crickets and cicadas, the whirring of bike tires, and the rushing of the nearby waves fill your ears. You gaze upward, letting the sight of pine branches, the blinking of fireflies, and more stars than you get to see anywhere else fill your vision, blurred by a slight smoky haze. You feel the cool touch of the breeze on your cheek and you burrow down just a bit deeper into your sweatshirt, delighted to be wearing it in mid-July. You swallow the last of that s'more, and you find yourself full to the brim with summer.

I'm an aspiring novelist. I've started many stories and just recently become more confident in my abilities due to the encouragement of great friends and teachers. I'd like to spread joy through my writing, so prepare for happy endings. :)

More stories from Abigail Penhallegon and writers in Humans and other communities.