by Rebecca Hansen 2 years ago in marriage
Report Story 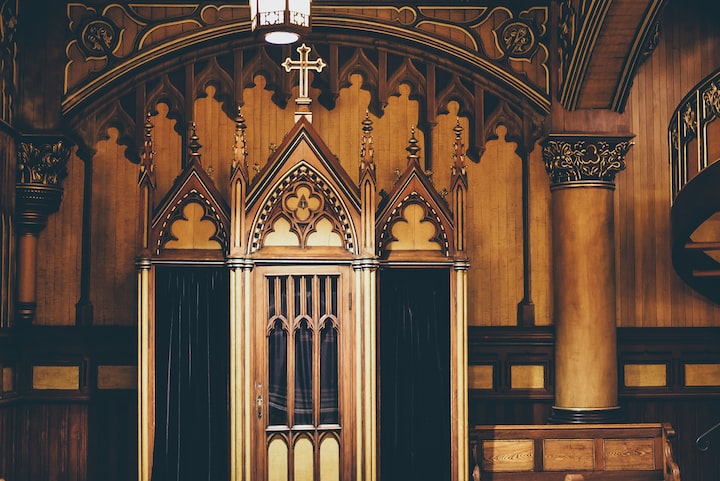 "Forgive me Father, for I have sinned. Is - is that how I'm supposed to do this?"

The voice coming through the screen of the confessional was high and quavering. I wondered what had brought such an elderly soul to confession for what certainly seemed like the first time.

"That's fine, ma'am," I intoned. Gregory liked to tease me about my "Father" voice, and I guess he was right in a way. I was more like a fly on the wall than a person during these moments, and I modulated my voice accordingly. "Please, continue."

"Well," she said, "I've never been to confession before. I'm not even Catholic. I don't even know why I'm here except...

"Oh, young man, you cannot even begin to imagine my guilt! My husband is dead, and his blood is on my hands."

I waited in silence, as I had been taught. Very few can tolerate a vacuum of words. Most people (all, in my limited experience) start talking again if you just wait.

"See, it all started back on our honeymoon," the voice went on, gaining steadiness as the familiar story took over. "My husband - Brad, that's his - was - his name, he insisted on taking me to New Orleans for the honeymoon. Mind you," a slight chuckle, self-deprecating, "I would have been perfectly happy with a night or two in a little cabin somewhere, but Brad was traveled, and he wanted to take me somewhere cultural and exciting.

"It was lovely, a bit overwhelming - so many smells, and colors, and people! - but lovely all the same. Our last night we were eating at a little bistro and he says, Brad says to me, 'Darling, if I lived in New Orleans, it would literally kill me.' And he waved at the food on his plate, and all the baked things piled in the display, and I knew he meant, the diet would kill him. I knew that's what he meant.

"And it was true. Brad never had any self control when it came to eating. Mercifully, we moved to crunchy granola California and I fed him veggies and tofu and nuts and lean meats and we were healthy and happy.

"But one day things started going wrong. He was a lawyer, Brad was, and his partner called me one day and asked me to coffee. He was worried, he said. Brad didn't seem himself. He was forgetful. He started to present on the wrong case in court. He had to be prompted to stand when it was time to stand.

"I started to brush it off, but then I remembered Brad standing, blankly, before the mirror, razor in hand, the week before. The moment had passed, but my protest died on my lips.

"'I'll have him see a doctor,' I promised. Men back then - you know, they didn't care for themselves, that was their woman's job.

"It was three years of worry and tests and scans, and finally the doctor stood there and told me my husband had early-onset Alzheimer's.

"Brad was still young, you must understand. Neither of us had yet passed 50. But there I was, suddenly the breadwinner and caretaker.

"I loved Brad with all my heart, and he loved me. His disease didn't take that away, thank God! Oh! I'm so sorry, was that offensive? I don't mean to offend."

"So for a long time he could still be left alone, and then he couldn't. We tried aides, but after ten years or so he would only cooperate with me. I worked from home, then; I was a seamstress, see, and could do the work and keep an eye out that Brad didn't wander into the road or set the house on fire.

"Brad was happy. The disease that ate his brain left him happy. I know it isn't always so, and I was grateful. But he was also exhausting! You may think that is a horrible way to speak about one's late husband, and perhaps it is. But it is true.

"By the time I was able to retire, I was worn out. Just a shell of myself. That's when I did the unforgiveable, I'm afraid.

"See, it had been twenty-two years since Brad started fading. But you must know, it was only his mind. His body was as hale and hearty as one might hope.

"It was too expensive to retire where we had lived and worked. I didn't have a lot, and Social Security is a pittance, as I'm sure a man in your position knows all too well. So we had to move, and well, I was looking at brochures from Arizona, and Florida and, you may laugh, Idaho and Alabama and even Alaska.

"And then one night it came to me, Brad's voice drifting forward from our honeymoon, 'If I lived in New Orleans it would literally kill me.'

"So, and I am so ashamed to admit this, Father, I moved us to New Orleans.

"Brad loved it. The food. The drinks. The people. The noise. Every day was a party for him. And I told myself, this is why. This is why I moved us here, because Brad is happy here and he deserves to be happy.

"But there was a nagging deep down that I had done wrong.

"Last week, Father, Brad dropped dead of a heart attack. He was laughing with a stranger at a food truck, ordering deep-fried something, when he just crumpled.

"They said he was gone before he hit the ground. Massive Coronary Event, that's what the doctor said at the hospital. Nothing anyone could have done.

"And the worst part is, I was a little happy. Brad had died doing what he loved best, and I could go home and take a nap without worrying that he would wander off. I could curl up and watch Jeopardy in peace. I told myself I was in shock.

"But I know better, Father. I know I brought my husband here to New Orleans because I wanted him to die. I loved him, you have to understand. But I was so tired.

"I don't know why I am telling you this. I've never been religious. And I don't believe you can absolve me of this crime.

"I guess I want to leave my guilt here, with my husband's ashes. I am moving to Boston to be near my sister and nephews. I may be a bit old for it, but I hope to have a new start.

"Do I want permission to go enjoy what life I have left? I suppose that's it. I don't suppose you can give me that?"

I let the pregnant silence build again, but this time it was I who grew uncomfortable and had to break it.

"Your sins are forgiven, child. Go in peace, and sin no more."

My voice hardly seemed my own. I imagined the woman, dark circles under her eyes, so desperate for sleep that her grief for her husband had to wait until after a nap. I thought of my own grandmother, spry and sturdy at nearly 80 years old.

A single sniffle from the other side of the screen.

Then she was gone, muffled footsteps fading away.

Guilt is a funny thing. You learn a lot about it when you sit on the silent side of the confessional screen as much as I do. Almost always, the ones who feel the most guilty are the most innocent.

More stories from Rebecca Hansen and writers in Humans and other communities.