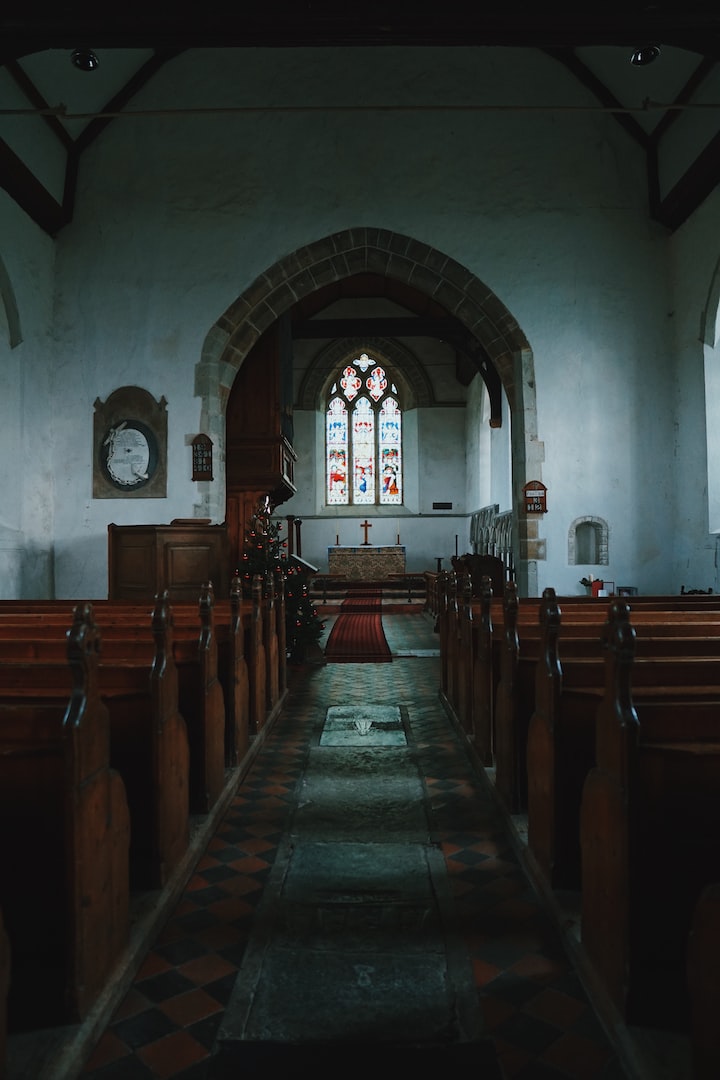 Photo by Reuben Rohard on Unsplash

Azure, Petal, and Ghavi made their way through the brush quietly. Their footsteps slowly came to a halt as voices could be heard ahead.

Peeking through the trees was a faint glow of light, emanating from an old abandoned chapel.

“There it is." Ghavi confirmed,”People have been entering and leaving that church for the last two nights. It was one location of many that I have been monitoring. The reason that made me take pause here was a strong reading of energy.”

“We have to wait here and be cautious before we jump to conclusions. We will wait here a few moments to see if there is any movement," Petal whispered as they all crouched, waiting.

“Shouldn’t one of us try to get a first-person view?” Azure suggested.

“We should just wait and see what the visuals tell us..”

Before Petal could finish her sentence, Azure had already made his way through the dark toward the faintly lit church.

Petal, almost in a panic, clenched one hand and waved another, beckoned Azure to return to post. It was too late.

"He never listens..," Petal fumed as Azure could be seen making his way to one side of the chapel.

With a strong leap, Azure was able to silently find footing in the old holes of the chapel.

"Our training prepares for this. Have a bit of faith, he is the most nimble of us," Ghavi tried to reassure Petal as they continued their streaked out position.

“I will make my way to the roof to get a better view,” Azure said over their communicator.

He knew Petal was most likely in a panic for his actions, however, he was in disagreement over how to handle this situation.

With utmost care and silence, Azure made his way up the wall, making sure to give each hole a small tug before using it as leverage. His training with G.R.E.T. helped him during these situations. Research but one motive for G.R.E.T., a stealth operation and defense was another. Once Azure reached the edge of the wall, he peered over the edge to reveal multiple black crevasses and rotten debris. He could smell the aged wood that had been neglected for years as the roof resembled a rocky path.

He pulled himself over and slowly made his way toward the center of the roof. With each step he took, faint voices could be heard coming from inside. A few feet before him, he noticed a small glow of light emanating from a few of the crevasses.

"There seems to be someone inside. It may be multiple people," Azure noted to the other two over his communicator, "I'm getting a closer look."

Peeking through one of the holes, a small crowd came into his view. A group of about fifteen people stood, murmuring, waiting.

The inside of the church looked no better than the outside. From wall to wall, black rotting streaks painted the interior. If not for the positions of a few dimly lit candles would the church be shrouded in complete darkness.

“This church is old enough to house even the most reclusive mouse," Azure noted quietly over the communicator.

“People come closer, my sons, my daughters, the chosen few,” the voice could be heard beckoning the crowd. As if being allured by a gentle melody, the crowd slowly began making their way closer to the altar.

There are some people inside, I will try to get a better listen," Azure said as the small crowd stopped just before the altar.

“Proceed with caution,” Petal could be heard over the communicator.

In the dimly lit candle light, a figure wearing a dark outfit emerged. His hair combed back and his gait suggested he was a man of great culture. He took a few steps and made his way to the front of the altar. Slowly, four other figures, each wrapped from head to toe in dark, colored cloaks, stood at his side. Lifting his chest high, he began to address those standing before him.

"Welcome, my children. Thank you for answering our call. You have made this decision out of the goodness of your hearts. But please, let us not waste any time."

"Tonight is special. Not just for our group but for you also. As you may know, we have had setbacks from the likes of the 'Birds' who have been hunting us. They are being influenced by those who want to see you stay suppressed. They do not want to see you or anyone else ascend. It is tragic how misguided they are but this is where you come in. You have opened your minds. You are ready. Here tonight, you will…"

"What the hell are you talking about?" A voice could be heard but the back of the crowd. Every figure in the chapel whipped around.

"Whoa, what is going on?" Azure said softly to himself.

"Azu, give me an update. We heard some grand speech but what is going on?" Petal asked frantically waiting for an answer.

"Let me listen," Azure responded as he squinted to see better.

A figure from the back of the crowd slowly emerged into the light. It was a young man. His hair was straight and his face twisted into a disgusted scowl.

"You heard me! This little circus is going to end right now!" The boy clenched his fists as he made his way closer to the altar. The others in the room quickly moved out of his way as the air became tense.

The priest continued to stare at the boy as he grew closer.