by Jillian Spiridon 7 months ago in fantasy

Sleeping Beauty's little sister never got her own story. 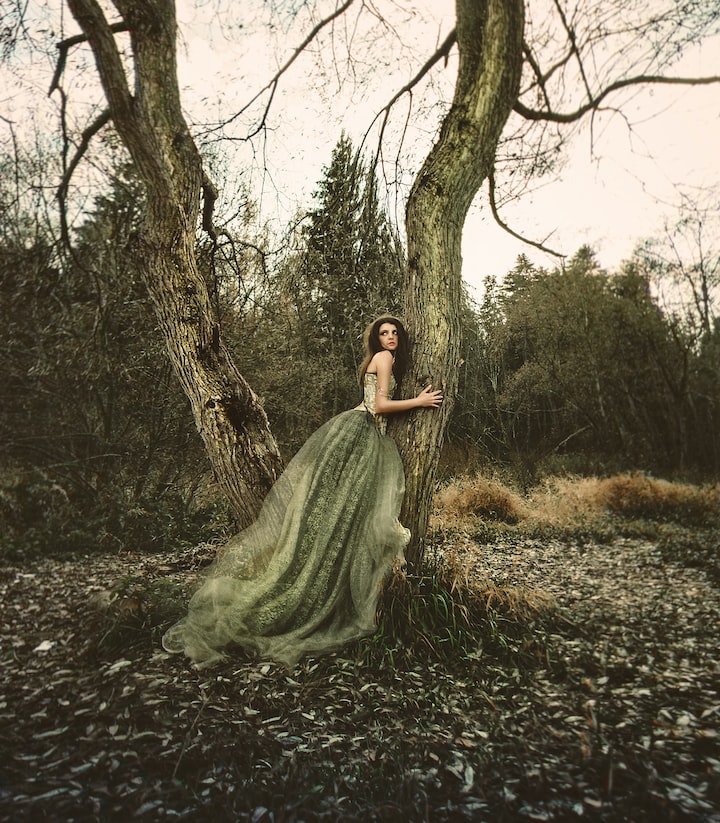 Photo by Alice Alinari on Unsplash

Aria thought Aurora was a myth—the stuff of cobwebs and dusty tomes, of minstrels' songs and vanishing fairy circles. The edge of the Wildwood stood shrouded in fog, vanishing in parts dependent on the day and time, and Aria knew better than to venture into it. She never left the castle grounds if she could help it. But there were whispers of the fairy queen, Briar Rose, who had cursed a young girl because of a human slight.

Of course, now Aria knew the reason the Wildwood existed was because of her parents—and how they had done a disservice to the Fair Folk by denying their liege an attendance to the blessing of Aurora, daughter of Irina and Stefan.

What had Irina thought, having another daughter after Aurora had been sequestered away to the outskirts of the Wood? What had Stefan thought, leaving his heir to an uncertain fate because of human prejudices against the very creatures that were said to have created the land the humans had poached and colonized?

Aria would have asked them, but everyone was stuck in their hundred-year sleep—except for her. She had been the exception to the rule.

And the fairies wanted nothing to do with her.

"She stinks of iron," Mayflower said, her nose scrunched like a cat smelling spoiled milk. "Aurora always smelled of flowers and sweet things."

Daybright tried to smile, but even Aria could see how the nurse-fairy's eyes were watering. "You can't compare her to a sister she's never met, May."

"Now, now," Firebug said softly, "you're scaring the poor dear. She has so many questions in her eyes."

Aria took a deep breath as she watched the three fairies who had been Aurora's keepers. Had she fought? Or had she been a docile child? Would they tell her the truth? The Fair Folk were said to be incapable of untruths, but Aria knew better than to trust the books that had been left to her. The world was so much greater than the yellowed pages with their faded ink.

"I take it you'll bring me to the queen?" The three fairies exchanged glances. "Isn't that right?" Aria made a point to stress the question.

"If that's what you wish," Firebug said, her voice soft, "but you may not like what she has to say."

"I don't like what she's done, so I doubt there's much she can do to make me like her any better already," the girl said.

The walk to the Wildwood was its own journey since Aria had never left the safety of the castle—but her home had become what was essentially a mass grave, especially if she couldn't undo what had been done to the sleeping royals and their citizens. Aria told herself she wasn't doing it for Aurora—Aurora, who was waiting on a prince who would probably never come, who might never see a sunrise or sunset again—but something needed to be done. A fairy's spell would not rob Aria of the only life she had ever known.

When Aria was in front of the fog that bridged the Ether realm to the human world, she reached out a hand even as Mayflower, Daybright, and Firebug gasped in unison. "What?" the girl asked, eyes darting over her shoulder.

"You must pay a tithe!" Mayflower erupted. "You can't cross into the Ether without paying your due!"

"What can I give?" Aria asked aloud. "Human currency means nothing to the Fair Folk, right?"

"But there are other things," Firebug said, "precious things, things that you may not cherish but which might mean everything to a lost sentry or a hobgoblin."

Aria let out a scoff. "Very well," she said, right before she took out her hidden danger from her shoe and cut off a lock of her brown hair. "It's not Aurora's golden hair, but it will have to do."

Then, as if taken away by invisible fingertips, the brown strands unraveled in the air and disappeared into the fog—only for the cloudy wisps to part, revealing the forest in all its murky glory.

"There," Aria said, though she was a bit breathless because she too had been uncertain about what she could hope to offer the Ether for safe passage into the Wildwood's depths. She stepped through, the three fairies following behind her cautiously.

It wasn't long before a creature—what Aria believed was a centaur—crossed their path. "The queen has been expecting you," the being that was half-woman and half-beast said. "Follow me."

Aria might have thought to explore more on her own, but she could already feel a cold sweat rising on her skin. Even though she wouldn't let it show, she was already reeling from the fear of just being outside her safe space within her kingdom's bounds. But she seemed to be braver than the fairies, who hadn't uttered a word since following her into the Wood.

The trees began to whisper amongst themselves as if they were real living beings—which Aria supposed they were, in the Wildwood. One tree even reached out and snagged her sleeve, ripping the fabric with a thorny branch. The rustle of leaves seemed to mock her as she turned this way and that, so unused to a magical world where everything could be doubted yet everything had to be believed, logic be damned.

Unlike the stories Aria had grown up reading, the queen of the Wildwood did not have a stately court filled with creatures of all shapes. The centaur led them to a weeping willow that lay beside a pond that was so clear as to reflect the cloudy sky above. Yet as Aria approached, a shock ran up her spine: what she had thought was a simple weeping willow was in fact a woman twisted into the shape of a tree. Eyes, a nose, and a mouth protruded from the gray-brown bark of the trunk. The branches were arms, the roots legs that burrowed into the wet soil, and the falling strands of leaves were the hair that fell in a sweep to sway in the soft breeze.

Aria might have thought this was normal or expected, even, until she heard Firebug say, "My lady, what has happened to you?"

A chuckle rumbled from deep within the bark. With what seemed like great difficulty, the wooded lips moved to say, "It's good to see you too, Firebug."

Aria didn't think it was wise to speak—but then Mayflower poked her in the back. "Don't just stand there like a dolt! Show your respect!"

The girl fell to one knee like she had seen the knights of her kingdom do when faced with her parents, the monarchs. "I must confess confusion too," Aria said. "I never thought the famed Briar Rose would be a tree woman."

"Watch your tongue," the female centaur said, but a creaky sound filled the air.

A moment later, Aria realized the queen was laughing.

"Irina and Stefan's second child? Charming." The queen's long branch-tresses swayed. "What you are seeing is a counter-curse, likely the doing of your parents."

"My parents have no magic," Aria said, though—really—how was she to know if the truth was different? Days ago, she hadn't even known her older sister existed.

"Ah, yes, but that doesn't mean they didn't reach out to someone who did," the queen said. "And that's where you come in."

"I can hardly leave, but you can be my eyes, my ears, my feet." The queen paused while Aria considered. "And once I am righted, I can lift the curse on your kingdom. On your parents. On your sister."

"What promise do I have of that?"

"I swear it upon the blood of the Wood," the queen said, and the fairies behind her all sucked in a breath.

Aria supposed the oath meant something if the very fairies who had become beholden to the human world even reacted to it.

"I don't know if you want to put your faith in me," Aria said. "I've never even left my kingdom before today."

And that was how Aria, the sister of Aurora who would be called the Sleeping Beauty, made a pact with the queen of the Fair Folk.

Where she went after that...well, that's a story for another day.