by Amargeaux Rai 2 months ago in space

Getting to Know Mercury, The Thinking Planet 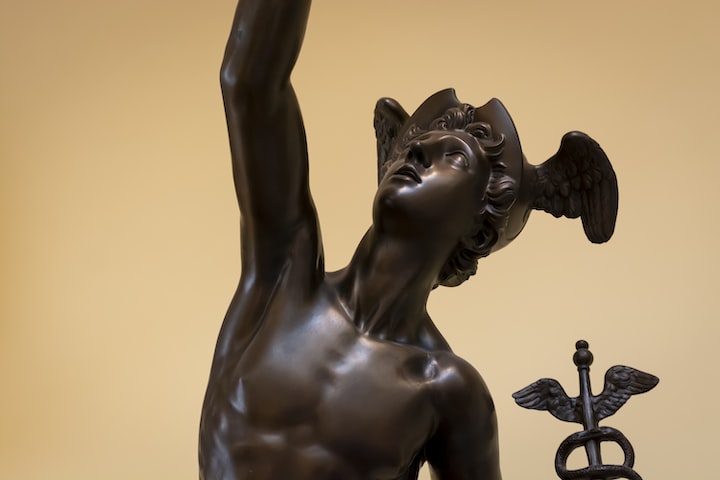 Photo by Jon Butterworth on Unsplash

The Energy of Intelligence : How We Think

We're always talking about this planet's moving pattern and essentially making it the most famous planet among us who love to blame a certain "retrograde" on all our mad choices.

But in all honesty, it's not that far off...

Mercury is a planet that beings in bright ideas, illuminating the messages from the incredible connections out higher power or spirit brings us.

Under the influence of this planet, our minds - our very brains, even - are the most heightened and we are the most enlightened, filled with the increased desire and sometimes even a more easily attained wisdom and understanding os the world, universe and multiverse around them.

First called Hermes by the Greeks (the god, not the planet), both the god and the planet were later named Mercury by the Romans. He's the messenger of the gods, swift - footed with little wings on his heels, Mercury is the guide of souls and a deity of transitions, communications and change. Because of this, he was an enabler of anything that broke down barriers, be it good or bad, helpers of thieves, it doesn't matter to him.

This god was also a ruler of material transactions, so he was the one to be called on for profit and trade. Travelers and merchants - even today - benefit from the energy os both the god and the planet when they're looking for success.

Bonus note : His name is related to both the words "market" (Mercatus) and "commerce" (Commercium).

Now, if you've never seen a picture of the god Mercury, You would see a staff in his left hand with two snakes twirling around it. Sometimes it also has wings on either side. You see this symbol on medical facilities. This is called a caduceus, and it symbolizes finding a midway of truth through reconciling opposites. In his right, he holds this scroll, which is the symbol of true wisdom that leads to insight and growth in that regard.

If you haven't noticed already, the caduceus is the symbol of the medical profession. The oath that is taken by doctors to this day; "A physician without knowledge of astrology has no right to call himself a physician", was originally spoken be Hippocrates himself.

And for now it's just my opinion, but as I mentioned earlier, the caduceus is a symbol of reconciling opposites to find the truth and with western medicine's forte being short - term issues and crisis, while Alternative medicine's forte being Long - issues and chronic issues, I feel that without a meeting of the minds and at least some knowledge from both sides, knowing what would work best for our patients spiritually, emotionally and mentally as well as physically, and ultimately giving them their best chance as optimal health will continue to be lost to them.

The planet of Mercury rules our overall communication, be it through our mind, through words or thought. When we look as where it's places on our birth charts, we can see how our minds react and calculate the world around us.

This could be an immensely useful tool for psychiatrists and psychologists to know astrology in general and apply it to their practice because in knowing how each of their patients personally react and think and respond will help them create a healing process more specific and ultimately effective accordingly.

Mercury also fules all media, places of learning, writing and publishing, as well as marketing and, honestly, anything else that interacts with the communicative modern world.

It's a fickle planet though; what seems like an exciting, slick resolution to a problem could bring up fresh issues instead of successful news. If we don't watch where we step, we could easily end up failing because of a just-as-easily avoidable misunderstanding.

If you're intellectually inclined, especially if that's your strong suit (especially if you're a Gemini or have Gemini anywhere in your birth chart, which is ruled by Mercury), be sure to remind yourself to stay firmly grounded or else you'll end up becoming overly neurotic about what you're doing, overheat and burn yourself out from struggling with communication over what you want.

On the other side of the coin, we could end up communicating too quick and find ourselves in an uncomfortable situation where everything's changing too quick for us, as the word "mercurial" suggests.

Basically, you shot your mouth off.

If we were to rake on the energy type of Mercury, one that's quick witted and devious, we just have to remember to counteract that by seeking knowledge with a kind and caring heart. With the heart in the middle of this, knowledge turns to experience, which turns to understanding, and finally wisdom.

Here's another chance to read about the Moon!

Next Chapter: Venus; The Energy of Pleasure : How We Love