by Black Dog Productions 11 months ago in fiction

Who Is Sitting On Our Table ? 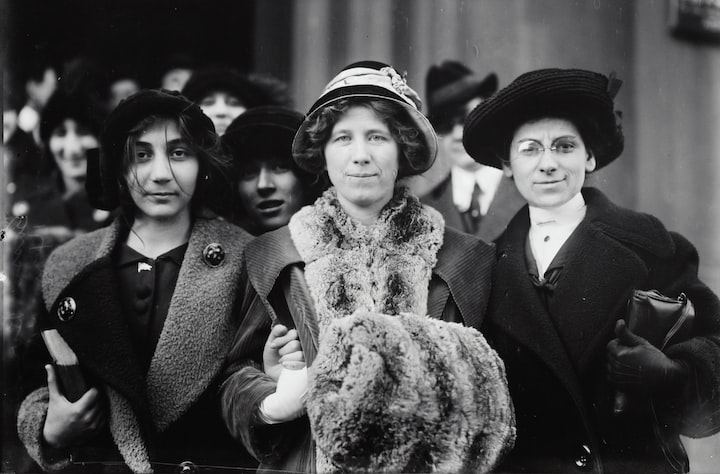 I was summoned to a dinner party with the Persian millionaire once more. The friend of my lover. Back in the year two thousand and eleven, I believe, or thereabouts. I know it was before the Caribbean island drama. Long before the snarling cats from my loved one's secret clan came out of their bags to crawl inside our love nest. Long spikey nails, quite a thing these days from nail-bars. I often wondered, if girls placing artificial cats claws upon their finger-tips in all bars holes, are to but distract men's eyes away from their face or legs.

I was, therefore at this point in time, still a millionaires mistress. The only one he had in his little black book, as far as I knew. That obviously was not the case. However, upon this extraordinary dinner meeting I was dragged to. Like it or lump it. I was summoned to arrive at a certain fine dining restaurant in the upmarket district of 'Mayfair' in London town. On the dot. Not knowing, what or who I was about to meet. I put on a long-black elegant velvet dress. Black is a colour to safely glide anywhere in. It was an off-the shoulder number in-fact. I've got a pretty good shoulder-line. I 'd been on a long-fetched vegan dietary spread for a while. I was in top shape at the time. We are what we eat after-all, or so the saying goes. A bit of good bone structure gives us a hand. I bless my parents for that.

I arrived at the fine dining restaurant. I was met by my man. We seated ourselves at our table. The jolly Persian billionaire, sat on my right. To the left, of my man, was a strange unattractive stick-thin woman. I recollect having seen her hanging around at ' The Mr Big' number country manor-house. Just off the M4 London. One of the hideaways I rattled on about in my summer collection of stories. Not finished those yet. The super-rich sets 'summer party 'scene.

She, the woman to the left of my man, was nothing special, in-fact a bit of a worn out number. She'd pumped up her hair so big with lacquer. One nearly passed out due to the scent. It was fiercely disgusting. You know those kind of women. Hair full, of all it's heavy lacquer. Just another weapon women use. Hiding dark-inner demons. Finding ways to conceal secrets. Huge hair with long artificial nail-bar falsely glued cats claws. T's the only way these vampiric types of femme- fatal can take a scratch at numbered men. That goes without adding the rest from a long-list of beauty forgeries to hook one's male beasts.

I was still modelling at this point in time. Fashion advertising jobs, in-fact. No false-hoods from beauty industries marketing propaganda claws are permitted. My make-up artist would have ripped me to shreds, if I'd arrived at a shoot flaunting any kind of fake glue or lacquers. One is stripped down to au-naturel. This is, under the veil, of the top-side of the modelling industry. A model must be able to be viewed like a naked piece of art. She should be but a canvas, therefore artificial additions are non-appropriate. The make-up artist has to see to those.

Back to our dining table in Mayfair. Upon our party being seated, an uncomfortable atmosphere was apparent. The Persian gentleman sparkled as he always did, with a long array of conversation. No one could make a word out of what he was saying. However, it was supposed to be a table spread between two couples, yet, it became quite clear to me. The dark haired woman with the high-lacquered long false finger-nails was a high-end lady of the night. A hooker in polite terms. I gathered this from the line the general conversation was going. Overflowing into dark erotic intimacy highlighted by my partner, who was infact, gobbling up the atmosphere, as was the other billionaire.

The lady of the night, upon checking me out, realised she was well below my level. Her cat claw like nail bar hooks flew all over the place. She couldn't keep her ugly hands elegantly laid by her knife and fork. Of which, she knew not, for one moment which fork was for which course either. My partner being blind to her table mannerisms. Was more intent on winding me up. Filtering verbal slime full of sickly sick jokes linked to sexual games. An under table type of conversation. Pornographic jokes, which howled from these males tongues, with nothing better to say. My dogs are more entertaining, if mine had been around. Making it quite clear, there had been more under-the linings of the table, between this female horror creature's slimy sexual appetite full of forgery. She was quite a good actress infact. On the subject of pleasing men. Both men on both my sides on that point. Yet, they hadn't ever had a threesome. I doubt, they 'd' cope with one of those, do you ? These kind of dudes are chickens when it comes down to crunching in bed- chambers, or they wouldn't be hanging out with such a tart, would they now?

The one I was in love with. My lover, made it clear intimacy had been a joint point. Himself and this ugly haw to my left. Stick a weak horse on a left reign, did you know that ? You do now. I had to bear dining in the middle of these horrific creatures. Some kind of internal kick must have been required. Yet, there was indeed no competition between her and I. The difference was chalk and cheese rather like the difference between a romantic trip to Hawaii contrasted with one to the back streets of Bangladesh.

Why do men with super-power wallets need kicks to enhance their male testosterone is beyond me. Ultimately, they are all unhappy men with disguised lives. Getting no kick from any woman. Have to have a full-cocktail spread of females to believe they are worth it in the male stakes. Bragging about one another's latest lay on the golf course. One great woman they cannot handle in all reality. They are scared-stiff of true-love. It will reveal their weaknesses in the bedroom. Too scared to show their decapitated pieces is the real reason they hide away with such dead fake Cleopatra's. Deep insecurities covered by white money gloves. I, thereby acknowledged the point, that this high end -hooker seated to the left of my partner sleeps with everyone in town. Including the big-time dude from my 'summer party' spread of stories. She, looks after his manor house too. If men get left with what's left on the shelf. It shows me, even more what the world has become.

Some of my stories within this twentieth century horror story regarding 'big-time-men' of today. Inside the upper -crust set. You will need to take a seat with a strong glass of something, or you may feint. No matter how beautiful the girlfriend is. I was a spring-board for darts and pins to be fired into. No matter how much love I gave, which I did, cry oceans in the name of love. I just kept receiving more pins and needles inside my heart. Using these kinds of mind-games is only but the tip of the ice-berg. I never know now, if I ever want to fall in love again.

These big-timers sadly sit all alone inside glass castles with only hookers to phone. Probably on computer screens. Sex on the net, all alone. Some hookers hold stockings up. For the right price will take them down. Live flesh meetings, must become a par requirement. As much as hitting a birdy on the golf-course is, I do surmise. Depends how near they reside to the red-light district, I guess. There's one in most towns you know. Maybe it's around the corner from the golf-course. You might get lucky.

The ugly hooker, I mentioned, has much more to her game of cards. Under her table was a box with all kinds of sex- toys. I can further manoeuvre into her professional toy-sack at a later date. She had the greatest pleasure in revealing her long list of sexual toy components right in-front of my very green- eyes. Not that I need an education on those departments. It's crystal clear to us all, in this year of time, about the secret- closets of many such a shop. I do not need to hop skip or jump there myself. I'm well versed in my IQ on such trivial tools. They these poor big-timers themselves must but use. Poor things. They don't have natural devices like I do after-all do they now? They're are all dried up poor things. They use stacks of those lubrication gels I guess. I believe they sell those in one's local pharmacy too. I've recently seen all kinds of exotic coloured tubes, when I quietly boringly go close to those departments fetching my boring time of the month ladies stuff. The cats out the bag.

The bottom line, talking of bottoms up. We have yet another huge subject matter in itself. Bottoms, I mean. Yet, here, now, in the moment, I tie up this story to get your hormones up again. A post virus pin- up of may suffice. Make sure it's the one with me naked by, ' The Tower De Eiffel ' Paris. That one was worth my naked body being pinned to. A French artist caught me in his net. Pinned me to the spot. I modelled for the French. Indeed. More on that note, at a given call. There is more to be said, but to be quite blunt. I had a pistol firing range of an emotional outburst of gin with tonic water, from, an elderly old dear, of yesterday's tears. I must shoot off to the next patisserie now. I won't loose my stockings in Paris.

Do take a tip from me. Check you little black- book has all the right numbers listed. Withdrawals are best. Keep your hair on your chest so the girlfriend can wax her legs in peaceful salons.

Tips most welcome. Look over here, there is a box to drop a few pennies in.

Thank you for your time

More stories from Black Dog Productions and writers in Filthy and other communities.