The Last Days of August 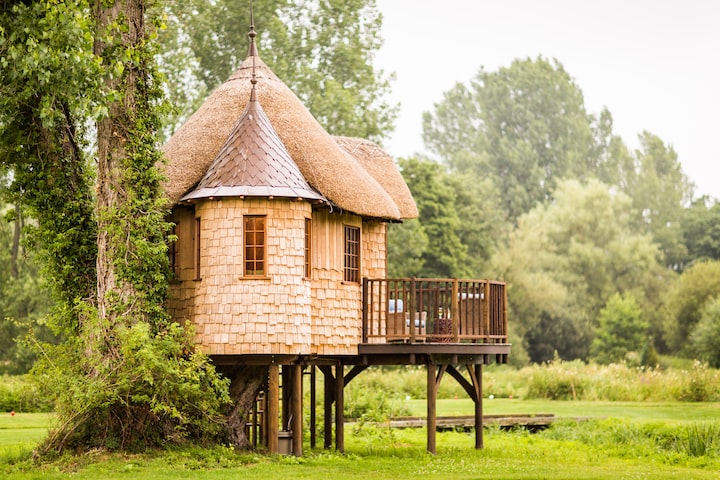 Photo by Matthew Harwood on Unsplash

I couldn’t bring myself to climb out of the car. I pulled up to the long, winding black driveway what seems like hours ago, but I couldn’t walk the half-mile to the front door. I sat and tried to steel myself. I tried to breathe. My palms drenched my steering wheel. I took a deep breath and attempted to dislodge the large lump settling in my throat.

The late summer sun kissed the sky goodbye in crimson streaks, and a light purple twilight rose in its stead. I felt like I had blown through the last decade like a sandstorm. I’d planned on visiting, I just…hadn’t. When the late-night call came, I rushed to pack, jumped in the car and began driving home.

Thirteen hours of crappy, lukewarm gas station coffee. My five-o’clock shadow had a shadow. I’d stopped to pee, and questioned turning back at least a dozen times. I was thirty-five, but my fear beat a clanging drum in my ears and I felt like a five-year-old.

I had come home again.

I watched a deer scamper through the woods at the side of my dad’s property. I tapped my fingers against the driver’s side door. A steady “woosh-woosh” of a sprinkler system hummed like a quiet symphony. It calmed my nerves. I pulled the car forward slightly—eager to sneak a peek at the sprawling backyard.

Gotta make sure that yard’s perfectly manicured, huh, Dad? I laughed aloud. Even if weeds threaten to choke your insides.

I craned my neck to peer outside the car window, squinted, and tried to make out the treehouse—my haven from kindergarten through my college years, but a small shed obstructed my view. I climbed out and crept into the backyard, kicking rotted pears from my path.

“It’s gone, Max.” A gravelly voice called out from behind me.

“The treehouse—if that’s what you’re looking for. Dad’s thinking about tearing the whole pear tree down too.”

Robbie, the dutiful oldest son. He manages Dad’s second auto detail shop. He sat by Mom’s side, holding her hand as she turned to a wisp of herself. Robbie, my ever-constant reminder —I’ll always stand shrinking in my brother’s shadow.

We shared an awkward hug. Robbie clasped me with meaty hands but pushed me away from his husky frame.

“Yeah, I know. I work seventy-plus hours a week, man. I’m sorry. I didn’t even know Mom was sick until last week. Dad said she didn’t want to ‘worry’ me.”

Robbie let me off the hook and asked about my legal clients. I spent so much time pushing to make partner at the firm; my good intentions fell like weeds into the void. Guilt crept up the back of my neck and spread like wildfire through my body. I walked with Robbie to the old pear tree. Sagging branches betrayed the adventure it had sparked through childhood. I remembered it as a towering giant, reaching into the sky, but now it stood only a few feet over my head.

The remnants of the treehouse still adorned the split trunk. A large, plank-base—once the foundation for a secret hideaway—pleaded silent desperation. Yes, the treehouse looked ready to part from this world.

I stood with my brother, arms-crossed, and we peered up at the tower. Gaping holes in the trunk’s ladder belied years of neglect.

“ Remember when Dad helped us build this?” I tried to break the thick silence.

I swept my hand upward, “When he spent that whole August waking us up at insane hours to ‘get to work’ on it?”

Robbie laughed. “C’mon, boys. This ‘house is gonna be the place to hang for you and your friends. It wasn’t much fun toward the end. He screamed like a drill sergeant.”

“Yeah, but dude—the finished product? A work of beauty.

‘These still edible?’” I plucked a pear from a sad branch.

Robbie shuddered and swatted the pear out of my hand.

We chatted for a few minutes. Robbie whipped out his phone to show me a scroll of Lisa and the girls in various standard summer-fare poses. I didn’t feel ready to face my Dad—to see the haggard disappointment in every muscle. I stopped trying to make him proud when I realized I never would.

Robbie offered to take my stuff up to my old room—the teenage tomb of must, sweat, and…other teenage boy activities. He tapped my shoulder.

“Thanks, man,” I managed. I couldn’t stop reflecting on the pear tree. “I’ll see you tomorrow.”

Over the years, any time I talked to Mom, she’d remark, “It’s just like you left it, Max. I want you to feel like you’re ‘home’ the next time you visit.”

But after my college graduation, my Dad erupted. I’d come home drunk after celebratory activities. All these years later, my face still stung from his backhanded response.

“You’re a constant disappointment, Max,” he barked. “Why can’t you be more like your brother? You break your mother’s heart with every damned selfish move. Get out of my sight.”

And so, I had. Mom acted as peacekeeper, and I paid for her to fly out to L.A. every year. But I hadn’t spoken to or seen the old man in over a decade. Until the call. I decided to climb up the pear tree.

I huffed and puffed as I leaped over the ghosts of old ladder steps, but managed to climb in. I scrunched into the middle of the planks and pulled my legs into my chest.

“What’s up old friend,” I whispered.

We built the treehouse when I was seven—Robbie, Dad, and I. It was Dad’s idea. We’d sat, cooling ourselves in the basement, escaping a bake in the hot summer sun by watching Stand By Me. Robbie and I had tried to contain our excitement when Dad announced he was taking some time off to “spend with (my) boys.”

By then, his scowl was tattooed on his face. He slaved away to grow his business—so Robbie and I could have more than the scraps he and Mom grew up with—and we mostly stayed away from him. But suddenly, he coveted Dad of the year. My big brother and I held hope.

We worked on that thing every day for the next forty days. Dad drew up plans with our input. Robbie and I nailed boards—or sometimes our own fingers. When Dad’s vein throbbed in the middle of his forehead, we’d know it was time for silence.

And, we created a treasure. Every boy in a square-mile radius talked about our treehouse. Robbie, the jock, plastered one wall with baseball memorabilia—Cal Ripken posters and Hank Aaron cards. I, the cerebral geek, held my Mutant Force: X-Men Rule! Marvel comic club there on Saturday mornings.

At sixteen, I lost my virginity to Lucy Hildebrand on an old mattress then eighteen-year-old, wise Robbie dragged up on a weekend my parents were away. Afterward, we reached out of the large wooden window and grabbed pears. We fed each other and giggled as the nectar rolled down our chins.

And the night after college graduation, I slept in the treehouse. Mom came up—one of two times I could remember. She told me the story of how she and Dad had planted the pear tree, of how it represented their lives together. She told me my Dad loved me but feared my decisions would transform me into a man chained down with regrets.

A light late spring rain fell, and we sat there together, taking in the sweet scent of flowers blooming. I rested my head on her shoulder, and sometime during the night, she left me there, tucked underneath an old throw blanket. The last night of my childhood, comforted by my mom. The last night I saw my Dad in person.

A knot in my heart grew as I thought of how dilapidated our beloved pear tree became. I knew I needed to go face my dad, to offer him whatever comfort he’d allow. I lay down on the planks, gazing up at the unpolluted country stars.

Heavy footsteps stomped up the ladder.

I looked up to see a wisp of a man—frailer and older than I gleaned from photos. His eyes swam with grief.

He climbed up and shoved in next to me.

At that moment, I knew he needed to be rid of the memories of Robbie and me in our youth. He needed to forget the house we’d forged together.

“I can help you,” I said. I looked up at him, and the chasm between us shrank. I wanted to embrace him, tell him I was sorry—to tell him I loved him. Instead, I placed my strong, young hand over his liver-spotted trembling fingers. He sighed and looked toward the woods.

“It’s good to have you home, Son.” He finally managed.

And we sat together for another hour, drinking in the last days of August.

Storytelling. Fiction is my heartbeat, but I write in multiple genres.