The amazing bond of brothers 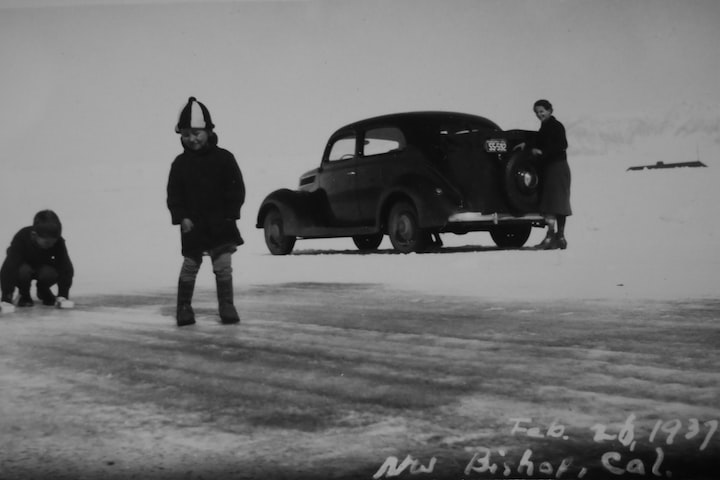 Photo by Pablò on Unsplash

Jake woke up before the world. He’d set his alarm for six, so he could sneak out and practice before Mom arose. He glanced at his drugstore alarm clock. The faint green glow-in-the-dark numbers said 4:30.

His feet were cold, and his nose felt frozen. For a moment, he threw his pillow over his face and told himself he'd start tomorrow. And then he remembered he was doing this for Zach. He wouldn't let his big brother down.

Jake sat up, blew into his hand, and cupped it around his nose, hoping for a quick thaw. He grabbed three pairs of wool socks from his wooden dresser drawer, which promptly fell off its tracks and crashed to the ground.

“Shit!” he whispered. He paused and braced himself for his mom’s angry stumble up the stairs. He waited for her slurred shout.

But her steps never came. Jake felt an ember in his chest grow to a flame. He'd stayed up until midnight playing video games, but his promise to Zach pushed him awake.

After school on Friday, he’d worked for an hour on his brother’s old hockey skates. Zach’s feet were at least five sizes larger than Jake’s. Four pairs of wool socks were too clumpy and tight. Two kept his feet sliding around. But three pairs eased him into Zach’s footsteps.

Jake grabbed a torn duffle bag from his closet and jammed the socks into the bottom. He snuck into the stillness of his big brother's empty room. The room's air was thick and musty, and it felt like a tomb.

He grabbed a hockey stick, covered in tape, from its resting space against Zach’s old desk. Jake tiptoed to the closet, reached with his fingertips to the top shelf, and pulled the skates from their hiding place. He blew the dust off the blade covers and admired their sleek, badass nature before shoving the skates into the bag too.

He stretched and hit himself in the cheek, hoping for a burst of energy. Jake struggled to shrug the sleep from his skin, and for a moment, thought about crawling back under his warm covers. He snuck back into his room and grabbed the tattered photo of him and Zach from underneath his pillow. Photos were his favorite—better than DVD or phone video memories. He loved how pictures freeze-framed his best moments. He could drown out any bad noise from the days of the photos and focus on the bright space those best moments occupied in his heart.

Their father left the week before the photo—no calls, no birthday cards—he vanished into the fog of morning and hid away from the people who loved him. Their mom locked herself in the bathroom and drank the cheap vodka handle she kept hidden under the sink. Jake was still just a kid and didn’t understand what was going on. He tried to avoid her as much as possible.

At the end of their first week as a fractured family, Zach, then a senior in high school, had swooped into Jake’s bedroom with a plastered grin on his face.

“Dude,” Zach said, grabbing his brother by the shoulders. “We’re going on an adventure. Today is Jake and Zach day.”

And so they did. The brothers left their pain and confusion behind—the unanswered questions about their dad locked away at home. They grabbed their dad's forgotten fishing gear from the garage and jumped into Zach's beater pickup truck. The roar of the engine kept the brothers in companionable silence as Zach drove to Hobbit’s Pond, a sprawling, crystal pond—a lake, really—five miles from home.

They detoured through a greasy spoon drive-thru on the way and gobbled down burgers and oversalted fries. As they turned up the dusty clay mountain pass toward the lake, Jake thought he’d never eaten any better meal. He smiled up toward Zach, who ruffled his hair.

He paused before asking, “Do you think Mom will be okay?”

Zach cleared his throat before responding. “Mom’s been screwed up since long before Dad split, Jakey. You and me—that’s what matters. Bros for life!”

Jake’s heart swelled at the memory. They’d asked an old couple, out for a walk on the pond’s craggy shores, to snap a shot with Zach's disposable camera. Zach hoisted his brother onto his shoulder and held up their catch—three large, slate-grey catfish—to show off for the camera. Jake held this as the best day of his life. Kissing Lauren Becker at the sixth-grade dance came close, but her chapped, cracked lips caused the moment to fall to second.

Five short months after the lake, Zach graduated high school and joined the Navy—he’d only returned home twice since. He and Jake played Call of Duty online whenever they had the chance, but Zach’s Middle East tour made even Facetime difficult. A deep space in Jake’s soul called for his brother.

Zach’s extended leave over Christmas got scrubbed due to a chaotic Middle East political uprising.

“Whatever,” Jake sulked. “That’s what you said last time.”

“Take care of Mom for me, Jake.” Zach blew off Jake’s jab.

“And I hope you’ve been practicing! You owe me a game when I get back.”

Hockey. Shit. Jake had forgotten. On Zach’s visit the Spring before, Jake vowed to practice and become as good as his brother. Zach placed twice on the All-American high school team in his short-lived career and lived for all things hockey-related. He told Jake about “desert” hockey he and his friends attempted to play on base, but he missed the ice.

Jake longed to fill his brother’s role, but two long years loomed ahead before he could try out for the high school team. He didn't have the money to join the junior league and didn't dare ask his mom to fund his passions.

Maybe if Mom could have games to look forward to and pride in her youngest son, she’d quit drinking.

Jake couldn’t fill the abandoned mine shaft in her heart, no matter how hard he tried. And his real mom had left with his father. An impostor wore her skin, spending its days drinking—in the bathroom, in the garage, at the bar. Tears became her sustenance. She ensured he had clothes to wear, and she filled the pantry—alimony from his father mysteriously showed up via direct deposit each month—but she couldn’t even bring herself to look at the only family member who’d bothered staying.

After the call with Zach, Jake raced out to the pond. He stared at the rippled blue water for hours, trying to will it to freeze. But the first freeze was still a month away. Jake knew he'd have to arrive early each winter morning to ensure solo time on the ice. And the winter ice was thin in spots—even after Hobbit’s Pond froze over, he’d have to test its sturdiness. His friend, Mikey, told him a kid drowned falling through the ice the year before.

Over the summer, he and Mikey had scraped their way through the brambled trails behind Jake’s house. Mikey marked any shortcut discoveries on a crude handmade map. By the time dead leaves crackled underfoot, they’d knocked the trek out to under an hour.

On Labor Day, he and Mikey decided to swim in the lake. Jake loved the way his feet searched for solid ground underneath the surface. The great unknown, floating him across the calm water, felt like security somehow. Even before winter, the lake reminded him of Zach. He’d close his eyes and imagine carving through the frozen pond’s surface. He could almost hear the “wickwick” of the skates signing the ice behind them.

And then he’d forgotten. No good excuse—just the allure of 7th grade and girls and hanging out with his friends. Jake needed places to eat up his time so his mom wouldn’t try to talk to him when he came home. He filled up his empty spaces so he could escape the heavy boulder of Zach’s absence sitting on his chest.

After the Navy canceled Zach's Christmas leave, Jake felt his stomach hollow out.

“I’ll be fine, Jake. Promise. My boys have my back. Besides, I’m rarely in combat anyway. Can’t let my slugger down,” Zach assured him.

“You don’t know that! You liar! You’ll just disappear like Dad.”

The words spilled out before he could stop them, and when Zach calmly stated their need to “talk it out,” Jake hung up on him.

He couldn’t find words of sunshine to form through his monsoon of worry; he couldn’t shake the shame crawling around in his gut.

As Jake made his way down the threadbare staircase, he noticed his mom, passed out on the living room couch. Not even an atomic bomb could wake her from her drunken slumber. He grabbed the blanket tangled by her feet and draped it over her. He picked up an empty vodka bottle from the floor and walked it to the kitchen trash.

His mind swirled as he crept down to the back door, skates hanging off one shoulder, duffle bag on the other. He clicked on a high-beamed pocket flashlight to illuminate his steps. A late-night snowfall had changed the world as he slept. Large, light blankets of snow insolated his walk. His crunching feet emitted the only sound for miles. Jake’s white puffs of breath set his cadence, and when he could see the lake—a faint white glow below the trees—he clicked the flashlight off.

His heart sprinted ahead of him. Jake ran wildly toward the frozen pond. He knew he looked ridiculous, but he didn’t care. He hurried to lace up the skates and pulled a hockey puck from the duffle bag. With a tepid step, Jake clunked his feet to the thick, frozen surface. The sunrise had begun its majesty of cacophonous colors—deep reds, blood oranges, pinks, and blues filled the sky.

He sped out toward the middle of the ice, carving a path with his blades. Even without practice, the puck felt at home in the crook of his stick. He lined up with an imaginary goal net and chucked the puck clear through.

“Woohoo!” Jake shouted aloud. “That one’s for you, Zach!”

He practiced his hockey stop, shaving the ice into a kind of sculpture. He felt lighter and unburdened somehow. Suddenly, he knew Zach was safe. He knew Zach would come home soon.

He stood there, in the middle of the makeshift hockey rink, and closed his eyes. In the distance, he heard a car door slam. Teenagers giggled and, with inner tubes and plastic sleds, made their way onto the ice.

Jake was no longer alone, but he smiled.

“I miss my brother,” he yelled to no one in particular.

“Bros for life!” he opened his eyes as the teenagers shot past him.

Jake didn’t care. He had kept his promise. He knew his big brother would keep his too.

Storytelling. Fiction is my heartbeat, but I write in multiple genres.

Receive stories by Sarah Paris in your feed
Sarah Paris
Read next: Mayflower